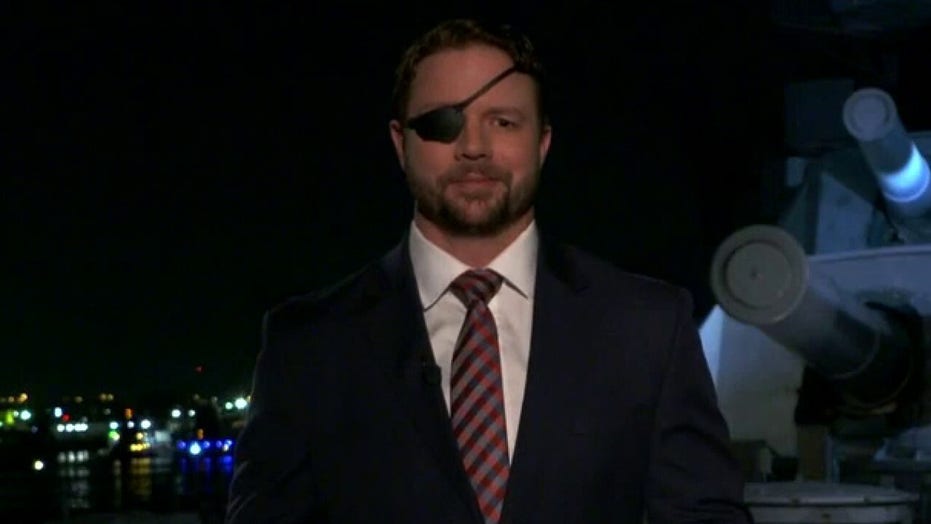 Dan Crenshaw: America is a nation of heroes

The theme for Wednesday night’s broadcast from the Republican National Convention was America as the “land of heroes.”

There were genuine heroes on hand. Some fit the most traditional definition of the American hero. Mark Geist, the Marine Corps veteran whose team single-handedly held off Al Qaeda for 13 hours in Benghazi, for example. The primetime show also offered a litany of servicemen and women turned Republican politicians, including retired Army Lt. Col. – and current U.S. senator from Iowa – Joni Ernst and Rep. Dan Crenshaw, a retired Navy SEAL.

But American heroes come in many varieties, and this Republican Convention has shone brightest when it has showcased the heroes our difficult times demand.

Heroism can be as simple as North Carolina’s Madison Cawthorne, a nominee for Congress and paraplegic, who nevertheless was determined to stand for the Pledge of Allegiance in his national television debut. It can be the simple act of a president who, unlike his opponent, refused to shut himself up in a basement and insisted on working a small – but nevertheless real – crowd at Baltimore’s Ft. McHenry.

Sister Dede Byrne was also once a U.S. Army colonel, but today applies her medical training toward living the religious vows of her membership of the Little Workers of the Sacred Hearts of Jesus and Mary.

“The truth is, the largest marginalized group in the world can be found here in the United States. They are the unborn,” she told the convention, decrying the Democrats' Joe Biden-Kamala Harris ticket as “the most anti-life presidential ticket ever, even supporting the horrors of late-term abortion and infanticide.”

That sort of heroism on behalf of the unborn is no less necessary than the martial courage Sister Byrne showed in the military.

The heroism of Michael McHale, president of the National Association of Police Organizations, is another kind still. He spoke on behalf of the heroes of our much-maligned law enforcement community, even as forces assemble to smear, defund and even “abolish” them. He laid the decision before Americans in the starkest terms, calling the election a choice of “the most pro-law enforcement president we’ve ever had or the most radical anti-police ticket in history.”

That puts in perspective something about the Democrats. Heroism most often comes to our attention in light of the villainy it opposes. This year, the Democrats and their allies have provided no shortage of contemptible villainy against which heroes can arise.

Earlier in the RNC, we saw figures such as Nick Sandmann, who took on the most powerful media organs in the world as they attempted to ruin his life, and the lives of his parents and classmates, for the crime of wearing a MAGA hat in public. Media outlets pushed their fake narrative and distorted facts to fit their agenda, but Sandmann, a hero, got the last laugh. He appeared on CNN’s air as part of its RNC coverage, after he had successfully sued the fake news network for defamation.

What has emerged during the convention is the stark realization that, among Republicans, speaking of authentic patriotism and deep, genuine faith is a comfortable topic.

Mark and Patricia McCloskey, too, defined their heroism against the left’s villainy. They face charges from a Democrat, George Soros-backrolled “progressive prosecutor” for having the bravery to stand up to the hateful mob the Democrats spent their convention praising.

On the third day of the RNC, these things started to crystallize for me –especially as I watched President Trump pay his respect to the genuine American heroes on hand to hear Vice President Mike Pence deliver the evening’s keynote address. The surprise visit from the commander in chief was a perfect capstone to the day.

What has emerged during the convention is the stark realization that, among Republicans, speaking of authentic patriotism and deep, genuine faith is a comfortable topic.

Former NFL great Jack Brewer eloquently spoke of his grandmother’s impact on his own faith.

School choice advocate Tera Myers movingly shared how her faith guided her through being the mother of a child that doctors had urged her to abort and how her decision to give birth to a beautiful child affirmed her conviction of the value of all children from conception.

The common thread in all these speeches was unabashed and unbowed reverence for God.

There is plenty of villainy for new heroes to define themselves against this election cycle. Many of them, such as U.S. House candidates Madison Cawthorne and Burgess Owens, are just beginning to emerge.