Home » Politics » Migrant crossings double in just one year: French need to step up if they want the cash

Migrant crossings double in just one year: French need to step up if they want the cash 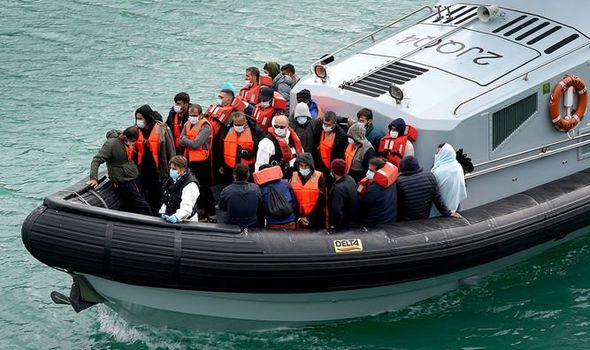 Yesterday a Border Force coastal patrol vessel was seen arriving in Dover full of people while a lifeboat had around 40 or 50, including families and young children, on board. From 8am to 12.30pm, it was estimated around 150 people had arrived. Later on, a group thought to be migrants were escorted by police and Border Force officers from the beach at StmMargaret’s Bay after landing in a small boat.

Dan O’Mahoney, clandestine channel threat commander for the Home Office, said: “The Government is determined to tackle the unacceptable rise in dangerous Channel crossings using every tool at our disposal, at every stage in the journey.”

The number of migrants intercepted by the French has jumped by two thirds since the Home Secretary threatened to withdraw funding for operations to prevent the trips.

The Home Office figures show that 2,292 attempted Channel crossings were made in the 10 days since it emerged that Priti Patel was considering abandoning the £54million deal to combat people smugglers.

In that period the French have halted 1,177 crossings – more than the 1,115 that reached Britain.

The 51 percent interception rate is much higher than the 30 percent rate recorded from July 20 to September 7.

Home Office staff have said the French would need to stop three in four crossings by the end of this month to receive the cash.

In October last year, a Kurdish-Iranian family, including small children, died when their migrant boat sank off the French coast.

Last month, a 27-year-old man from Eritrea died after he and four others jumped overboard as their boat started to sink.