Representative Matt Gaetz, the Florida Republican who is the focus of a Justice Department inquiry over whether he broke sex trafficking laws, maintained his innocence on Friday and insisted he was the victim of “the leaks and the lies” of his critics.

The remarks came during Mr. Gaetz’s first major public appearance since The New York Times reported last week that investigators were said to be examining his involvement with women who were recruited online for sex and given cash payments, as well as whether Mr. Gaetz had sex with a 17-year-old. The investigation developed from an inquiry into a former Florida tax official and friend of Mr. Gaetz, Joel Greenberg.

“They lie about me because I tell the truth about them, and I’m not gonna stop,” Mr. Gaetz said at an event hosted at former President Donald J. Trump’s private club, Trump National Doral Miami, by the group Women for America First. “So when you see the leaks and the lies and the falsehoods and the smears, when you see the anonymous sources and insiders forecasting my demise, know this: They aren’t really coming for me. They’re coming for you. I’m just in the way.”

Mr. Gaetz, 38 and a high-profile supporter of Mr. Trump, has repeatedly denied that he had improper contact with a 17-year-old or that he paid for sex.

Mr. Greenberg’s lawyer and a prosecutor indicated this week that he was likely to plead guilty in coming days to federal charges, signaling that he may be willing to cooperate as a witness against Mr. Gaetz, potentially reducing his own jail time while broadening the congressman’s legal exposure.

Mobile app receipts have shown payments from both men to one of the women, and a payment from Mr. Greenberg to a second woman. The women told their friends that the payments were for sex with the men, two people familiar with the conversations have said.

In his remarks on Friday, delivered against a sunlit backdrop of palm tree silhouettes and a line of billowing American flags, Mr. Gaetz repeatedly tried to cast himself as a populist force in the mold of Mr. Trump. He also made statements similar to ones Mr. Trump has used to denounce investigations into his own conduct.

“I know this: Firebrands don’t retreat, especially when the battle for the soul of our country calls,” he said. “Big government, big tech, big business, big media — they’d all breathe a sigh of relief if I were no longer in the Congress fighting for you.”

He continued: “The smears against me range from distortions of my personal life to wild — and I mean wild — conspiracy theories. I won’t be intimidated by a lying media,” and he added, “The truth will prevail.” 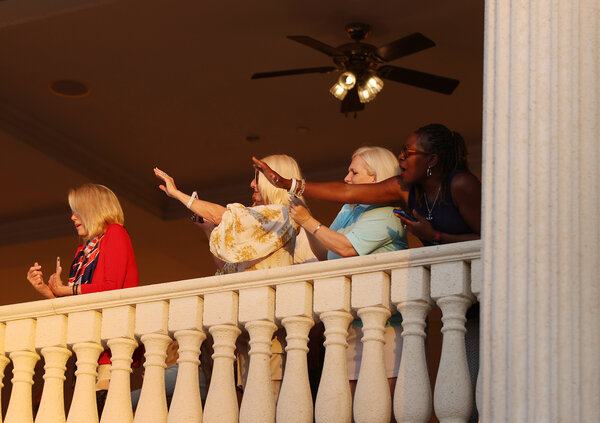 The largely maskless crowd of about 50 people, seated at tables as they dined from a buffet, cheered and clamored as the congressman took the stage. Roughly two dozen others watched from a second-floor balcony above.

Women for America First also helped organize the rally near the White House on Jan. 6 where then-President Trump incited supporters to protest Congress’ certification of the election results, culminating in the deadly riot at the Capitol.