The soundness of the Mario Cuomo Bridge north of New York City should be investigated following reports of a potential cover-up over allegedly defective bolts, a New York Democrat told Transportation Secretary Pete Buttigieg in a letter this week.

The span, which carries travelers across the Hudson River, is named for a late former governor of New York who was the father of current New York Gov. Andrew Cuomo. The elder Cuomo died on New Year’s Day in 2015 at age 82.

In his letter, U.S. Rep. Mondaire Jones, D-N.Y., asks Buttigieg to “use your authority to open an investigation into these claims and [I] implore you to work with the New York State Department of Transportation to ensure proper inspections are conducted to assure the public of the safety of the bridge.”

Members of the New York Assembly’s Republican conference have also called for a federal investigation of the bridge, writing to the federal Department of Transportation’s inspector general earlier this week, the Times-Union of Albany reported.

Their letter asked for “an immediate investigation to ensure the bridge is safe and that state officials, private contractors and others involved in the bridge’s completion acted appropriately.” 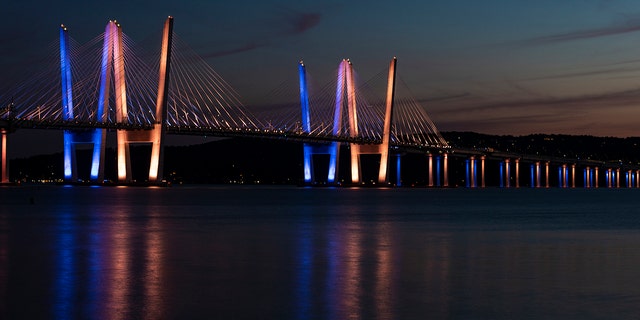 The Times-Union previously reported the company that built the bridge allegedly didn’t reveal that bolts used in the design were breaking at the height of construction for the nearly $4 billion bridge finished in 2017, replacing the Tappan Zee Bridge.

Jones continued, “It is key to the economic success of the region and critical to the livelihood of my constituents, many thousands of whom use the bridge to commute to and from work. I urge you to immediately begin a thorough and transparent investigation in coordination with the New York Department of Transportation into the structural integrity of the bridge and address any concerns about its safety.”

Earlier this week, the New York Thruway Authority denied there were any problems on the bridge but a 2017 investigation launched by the state’s attorney general — following a whistleblower complaint alleging a coverup over the bolt issue — resulted in a nearly $2 million settlement with the state.

The investigation was conducted by the state inspector general’s office and the Thruway Authority but most of the documents remain sealed, the Times-Union reported.

The Thruway Authority in a statement this week said it had “immediately inform[ed] the inspector general” after learning about potential bolt failures in 2016, and spent more than $1 million and “engaged world-renowned subject matter experts, developed a testing program, conducted extensive studies, and tested well over five hundred bolts.”

The investigation “confirmed that the bolts met or exceeded the requirements set forth by the American Society for Testing and Materials,” Jamey Barbas, the Thruway Authority’s project director for the bridge, said in the statement.

He added that the “very small number of bolts that were broken is not a cause for safety concern on such a large bridge consisting of more than one million bolts.”

Tappan Zee Constructors, the company that built the bridge, put out a statement earlier this week saying it “unequivocally stands by the quality of our work and the safety of the bridge,” the Times-Union reported.

The statement continued: “The construction companies that make up TZC and its bridge designer have built many of the major crossings in the New York area, including the former Tappan Zee Bridge, and have a long history of excellence.

“TZC performed additional testing and inspection measures of the high strength bolts on the bridge. This was in addition to the independent sampling and testing methods completed as part of the fabrication, construction, and quality assurance processes. The testing, including the testing performed by the laboratory retained by the state as part of its investigation, has confirmed that the bolts are in conformance with applicable industry standards.”

Prior to the bolt issue, many New York residents objected when the current governor pushed to have the bridge named for his late father. In November 2017, a petition launched online, opposing the Cuomo name on the bridge, drew tens of thousands of signatures.