State lawmakers and advocates pushing to legalize marijuana this year aren’t just touting legalization as a way to raise tax revenue and regulate an underground pot market. They’re also talking about fixing a broken criminal justice system and reinvesting in poor and minority communities that have been battered by decades of the government’s war on drugs.

The focus on justice and equity has sharpened over time, longtime pot advocates say, as it’s become clear that such issues should be addressed and that doing so won’t alienate voters — most of whom, polls consistently show, support legal marijuana. Civil rights groups also have raised their voices in legalization discussions.

Now social justice provisions can be found in legalization proposals in both blue and red states, including several of the states where voters will face ballot measures on the issue in November. Social justice also is a talking point for opponents, who argue that allowing weed sales would hurt — not help — low-income and minority people.

“We don’t want either extreme. We don’t want incarceration, and we don’t want legalization and commercialization,” said Kevin Sabet, the president and CEO of Smart Approaches to Marijuana, a coalition based in Alexandria, Virginia, that is opposing legalization efforts in multiple states.

Many state lawmakers say they back legalization because, first and foremost, it can be an opportunity to make changes to the criminal justice system and repair the harm done to groups disproportionately arrested for using the drug.

“For me, the social justice piece of it is much larger than, I think, the taxing and regulating — although that is important,” said New York Assemblywoman Crystal Peoples-Stokes, a Democrat who represents part of the city of Buffalo and has put forward a bill to legalize weed.

The bill Peoples-Stokes has proposed and a companion bill in the New York state Senate would allow people to possess, use, buy or transport up to 2 pounds of marijuana; reduce penalties for some marijuana crimes; make it easier for people to get criminal records sealed for such crimes; and disburse some tax revenue to nonprofits in communities “disproportionately affected” by former drug policies.

Some 800,000 New Yorkers have been arrested on charges of marijuana possession over the past 20 years, according to the coalition of organizations supporting the bill, Sensible Marijuana Access through Regulated Trade or SMART. In New York City, the vast majority of people arrested are black and Latino, advocates said.

The proposed legislation also would make it easier for people to get in on the marijuana boom by creating inexpensive small-business licenses and making them available to people with drug convictions. It’s not fair, Peoples-Stokes said, for people who got in trouble for handling pot in the past to now get shut out of the legal industry.

Sabet’s group has been lobbying against legalization in New York. He said that while the organization agrees with the criminal justice and social justice aspects of the legislation, he doesn’t think it’s necessary to legalize pot to achieve those goals.

Today nine states and the District of Columbia allow adults to use small amounts of marijuana for fun, and 23 others allow certain patients to use the drug medicinally. Now that most Americans support legalization, for many pot proponents the question isn’t whether weed will be legalized. It’s how.

For instance, advocates are using ballot initiatives to address regulatory issues that policymakers struggled with in the past. An extreme example of the change is California’s 2016 ballot initiative, which filled more than 60 pages and covered everything from rules for marijuana testing laboratories to expungement of marijuana crimes from criminal records. 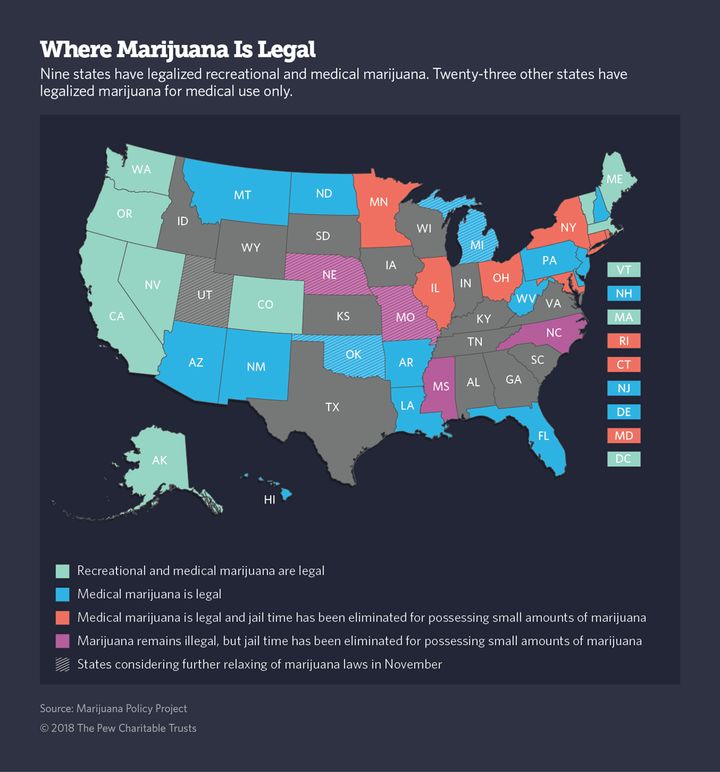 The California initiative allowed people with drug convictions to obtain marijuana licenses. It set aside $10 million a year to pay for services such as job placement, legal help, and mental health and addiction treatment for residents of communities hit hard by former drug laws. Passed by 57 percent, the initiative’s success showed that voters support justice and equity provisions — or at least aren’t dissuaded by them, Armentano said.

“Not only did that measure pass, but I would argue more importantly, there was very little public opposition raised during the campaign,” he said, referring to the provisions. “Once we saw that, it was clear that people were comfortable with those provisions.”

This year that theory will be tested in more conservative states.

Missouri has four pot legalization initiatives on the ballot this fall; three focus on allowing medical use of the drug and the fourth on recreational use. The recreational use initiative by Total Legalization, a volunteer operation that isn’t backed by national pro-weed groups, also would require prisoners incarcerated for nonviolent marijuana-related crimes to be released within 30 days and would expunge nonviolent marijuana-related criminal records.

Becca Loane, a member of the board of directors for the campaign committee backing the initiative, said her team wants to legalize marijuana completely without waiting for the Legislature to work out the details. “It’s something that needs to be done.”

Those communities would be determined by the state Department of Licensing and Regulatory Affairs, but in essence it means minority communities, said Josh Hovey, a spokesman for the Coalition to Regulate Marijuana Like Alcohol campaign based in Lansing, Michigan.

Backers of the Michigan initiative wanted to add expungement provisions but decided not to after being told by legal experts that the state constitution requires ballot initiatives to address only one issue, Hovey said.

The argument that marijuana legalization will help poor black and Latino people has been made vociferously in New York and New Jersey, where national groups that back legalization, such as the Drug Policy Alliance, have teamed up with clergy and civil rights groups.

New Jersey Gov. Phil Murphy, a Democrat, called marijuana legalization a social justice issue during his campaign last year. New York gubernatorial candidate Cynthia Nixon, also a Democrat, has said she supports legalization because “we have to stop putting people of color in jail for something that white people do with impunity.”

New York Gov. Andrew Cuomo, a Democrat, has not taken a position on recreational marijuana legalization. His Republican challenger, Marc Molinaro, has said he wants to see expanded access to medical marijuana.

Legal weed backers in New Jersey say they want legislation that — like Peoples-Stokes’ bill in New York — would make it easier for people to expunge criminal records, set aside money for neighborhoods most impacted by marijuana-related arrests and incarceration, and remove barriers to participation in the industry. 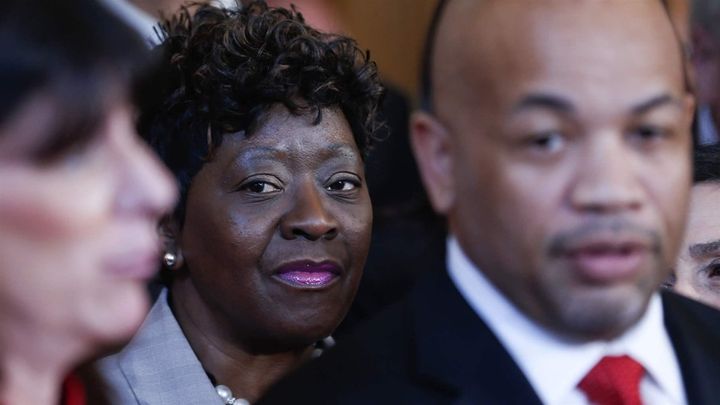 “It’s been a massive effort on our part to get it done, and get it done in the correct way,” said Safeer Quraishi, administrative director of the New Jersey NAACP state conference.

Several marijuana legalization bills have been introduced in New Jersey, including most recently a bill from state Sens. Nicholas Scutari and Stephen Sweeney, both Democrats. Quraishi said the NAACP doesn’t support the Scutari bill because it doesn’t include automatic expungements or do enough to promote minority-owned businesses, among other concerns.

Meanwhile the chairman of the Legislative Black Caucus, Democratic state Sen. Ronald Rice, strongly opposes marijuana legalization. He said drug use and addiction have led to violence and financial ruin for many people in his Newark district, and that legalizing marijuana will encourage more people to use what he considers a gateway drug.

He’s frustrated that legislation he introduced in February that would eliminate criminal penalties for possessing 10 grams of marijuana or less — but would still fine people for possession — hasn’t gained more support. It’s currently in the Senate Judiciary Committee.

“The conversation is about — social justice, some black people can make some money, expunging records and stuff,” he said. “Well, we can do all that without legalizing.”

The NAACP doesn’t support a bill that would only decriminalize marijuana, because such bills don’t do enough to repair the harm done to communities, Quraishi said. “Any bill that doesn’t take it far enough, we don’t support.”

Nearly two-thirds of black, Hispanic and multiracial people supported marijuana legalization, according to a Stockton University poll of New Jersey adults this spring. That was a higher share than support among white adults, according to a breakdown by race and ethnicity shared with Stateline.

Smart Approaches to Marijuana, which helped write Rice’s decriminalization bill, Sabet said, has recently helped defeat or delay proposals to legalize weed in New Jersey, New Hampshire, Connecticut, Rhode Island and Delaware and to allow commercial sales in Vermont. The group also lobbied against legalization in New York, where bills in the past two legislative sessions have had little success.

Peoples-Stokes, the New York assemblywoman, said that she doesn’t think marijuana is a gateway drug or that it’s addictive. Some doctors and public health experts disagree.

But she does see a divide in attitudes toward legalization, she said. “I think it’s fair to say that there are significant numbers of black and brown people that have the old attitude about marijuana — that it’s a negative.”

People need to be taught to think about pot differently, she said. It’s used as medicine, and it’s related to hemp, a crop that’s legal to grow in New York under a pilot program. “The reason why it was considered in a negative way is that it was a reason to lock people up.”