Reacting to the “terrible” by-election results in Wakefield and Tiverton and Honiton, Lord Frost, who resigned from the Government earlier this year, took to Twitter to puncture Labour leader Sir Keir Starmer’s glee at the double humiliation for Boris Johnson. It came shortly after the Prime Minister had suffered his first Cabinet resignation with party chairman Oliver Dowden walking out of his government warning that Conservatives are “distressed and disappointed”.

In his damning analysis for Starmer, Lord Frost pointed out that the turnout in Wakefield where Labour won was a mere 20 percent – one of the lowest in history.

Despite being a key “Red Wall marginal” only slightly more voters turned out than when Labour won the safe seat of Manchester Central in 2012 with the 18.2 percent turnout still being the lowest on record.

It feeds into criticism of Starmer from his own MPs that he is “boring” and “uninspiring” and cannot win an election by himself.

Lord Frost noted that the victories for the two pro-EU parties, who appear to have an unofficial election pact, was more a result of Conservative voters staying at home. 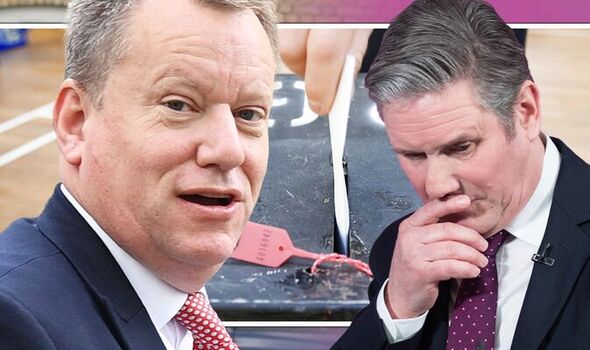 He said: “It’s important to cut through the noise and spin on the Wakefield and Tiverton results.

“Both are terrible for @Conservatives. Neither is particularly good for @labour or @LibDems.”

“In Tiverton there was some Lab/Lib switching, but their total vote as a share of the whole *electorate* only went up from from 25% to 29%.

He went on: “In Wakefield turnout was extremely low. The Lab/Lib vote actually fell, from 28% to 20%.

However, he also made it clear that the Conservatives need to change as well with a strong hint that Mr Johnson needs to go. 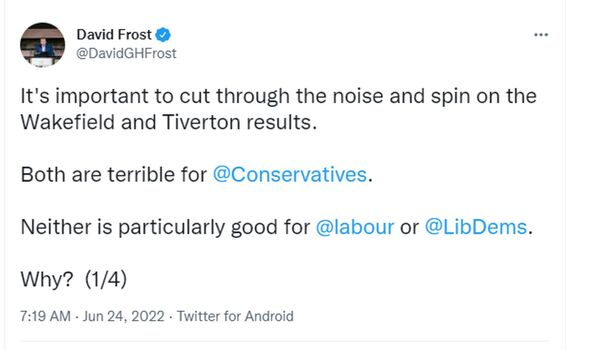 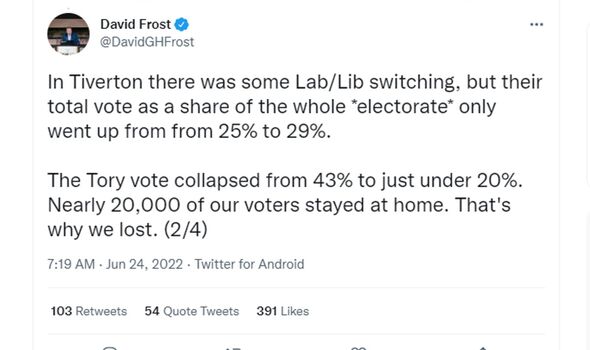 He said: “So, in contrast to many ‘normal’ mid-term by-elections, these do not show strong protest votes for the opposition.

“They show people who voted for us in 2019 refusing to come out and do so again.

“We as @Conservatives must decide why that is, and what we do about it.”

With the Prime Minister 4,000 miles away at the Commonwealth summit in Rwanda, the assessment of his former ally will undermine is position further.

However, Starmer is also set to find out in days whether he will be fined over the so-called beergate allegations in Durham last year where he is alleged to have broken lockdown rules.

If he resigns it will trigger chaos in the Labour Party as well with a new leadership contest.

Brexit is at risk: There is now proof of a Labour – Lib Dem pact [INSIGHT]

Brexit POLL: Do you agree with Lord Frost that Brexit is working? [REACT] 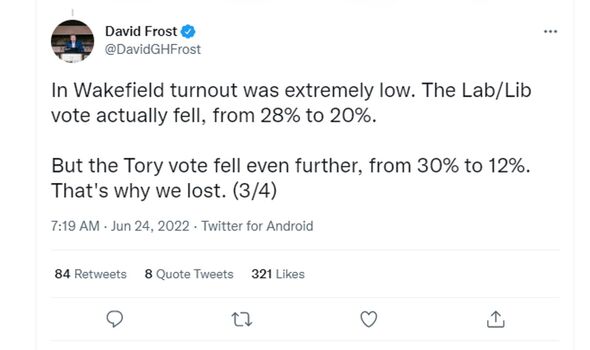 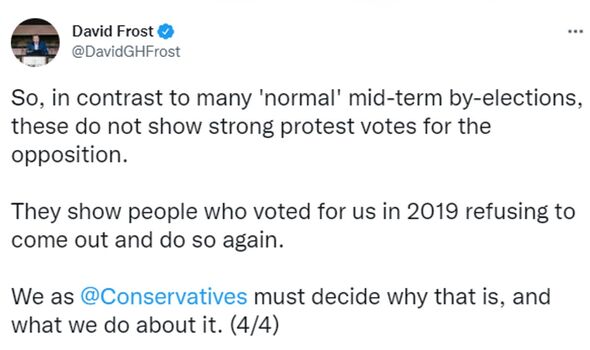