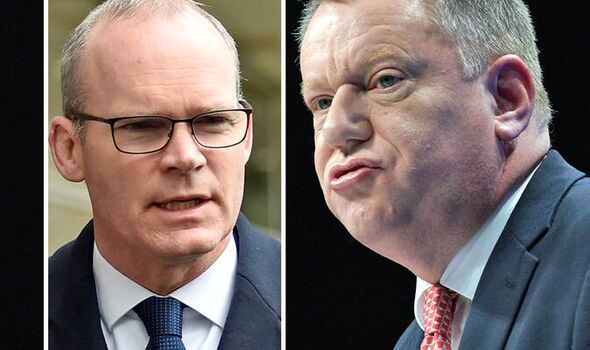 The former Brexit minister accused Dublin of failing to respect Northern Ireland’s place in the UK.

He said that Ireland was failing to accept there was an international border between the province and the Republic.

Lord Frost was responding to a statement from Ireland’s foreign secretary Simon Coveney, attacking the Government for the “regrettable” decision to impose border clearance requirements on EU citizens crossing the border into Northern Ireland.

He said No10 had “ignored” concerns raised by Dubin and that the new requirements were contrary to the work done over “many years to protect free movement on the Island of Ireland for everyone”.

In the House of Commons last night, non-Irish EU citizens will be required to apply online for pre-travel clearance – known as Electronic Travel Authorisation (ETA) – when entering any part of the UK.

Critics have warned the checks risk border checks being imposed on those crossing from the Republic of Ireland to the northern province.

The UK has pledged the new legislation will do nothing to harm the Good Friday Agreement and will continue to allow free travel for Britons and Irish citizens.

“One could be forgiven for thinking occasionally from Irish government public statements that sometimes they forget that.

“Obviously we must have rules for third country nationals entering the UK via that border just as at all others.

“And, for the avoidance of doubt, though after all these years it shouldn’t need saying, that does not of course mean those rules have to be enforced at the border.”