Liz Truss warned she could be falling into EU army trap

Liz Truss is asked whether Emmanuel Macron is a 'friend'

The Prime Minister has been warned not to allow the UK to be dragged into an EU Army by accident after she signed a military deal this week at Emmanuel Macron’s European Political Community (EPC) summit in Prague. The decision to go into part of the PESCO has alarmed some Brexiteers who fear it could undermine the UK’s sovereignty. 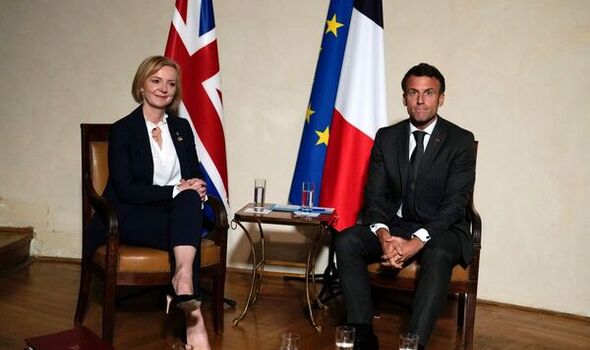 Former defence minister Sir Gerald Howarth, a leading Brexiteer has led the campaign to resist joining PESCO for many years.

He said: “This is very serious and we must be very careful. The issue around PESCO is that the structures are permanent.

“We must not sign up to anything which undermines our sovereignty and where we do not have a veto.

“Second, we must not do anything that undermines NATO. If we have learnt anything over the last few months is that we need NATO for the defence of western values and Europe against our enemies which at the moment is clearly Russia.”

At the EPC meeting on Thursday, the EU member states voted unanimously to allow the UK to join the the mobility project that would allow the UK to move troops and military equipment more quickly.

The UK Government decided to enter the strand in case Britain is called upon as a NATO ally to defend the Baltic states from a Russian invasion.

Fears have heightened over the prospect of Putin pushing military into Lithuania, Latvia and Estonia after his invasion of Ukraine.

One senior Brexiteer, former Armed Forces Minister, Mark Francois, who now chairs the powerful group of Tory Brexiteers the European Research Group (ERG), said he believes that the move was the right one.

He said: “As we are outside the EU, we can opt in to individual PESCO projects if they have merit and looking at how we could speed up reinforcing the Baltic States from the UK, across internal EU borders, may well have military advantages.

“However, it is NATO that remains the bedrock of our security, especially in deterring further Russian adventurism and we should never forget that.”

But David Banks, of Defence Policy Research, fears the move is part of a slippery slope to joining an EU army.

There are concerns that senior figures in the civil service at the Ministry of Defence and Foreign Office would like Britain to join an EU army.

He said: “There is something like a 10 stage process of application, checking, negotiation and signing of binding commitments before the PESCO states even get to a vote.

“How has it come this far between Whitehall and EU apparatuses (European Defence Agency and Political and Security Committee) and we didn’t even know. People saying that US is already in Military Mobility but they were only invited.

“I’m not aware of any vote and deal of this kind.”