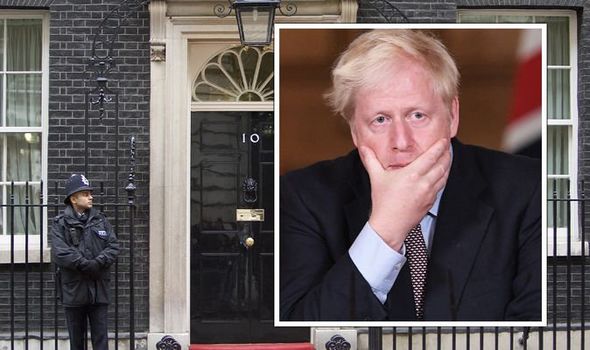 More than 100 workers were asked to the Downing Street ­bash when meetings of more than two people were banned, a leaked email from aide Martin Reynolds, left, has revealed.

He asked guests to bring drinks and “make the most of the lovely weather” at the party. The alleged event is said to have taken place on May 20, 2020, when the rest of the country was banned from group social gatherings outdoors.

And last night the Prime Minister’s former adviser Dominic Cummings claimed the PM was there.

The latest revelations have led to fresh calls for Mr Johnson to be questioned as part of the internal inquiry into reports of a series of parties in Downing Street.

Around 40 staff are understood to have attended on May 20, eating picnic food and drinking, say ITV.

The email was sent to staff members from No.10, including the PM’s advisers, speechwriters and door staff.

In it, Mr Reynolds says: “Hi all. After what has been an incredibly busy period it would be nice to make the most of the lovely weather and have some socially distanced drinks in the No.10 ­garden this evening.

Please join us from 6pm and bring your own booze.”

The email follows allegations about staff gathering in the garden on a separate occasion on May 15.

A photograph had emerged of Mr Johnson and his wife Carrie sitting with No.10 staff, including Mr Reynolds, on the terrace with a bottle of wine and cheese.

Downing Street has previously insisted that the photograph showed a work meeting.

But the email about the “drinks” on May 20 makes it clear that this was a plan for a social gathering.

Less than an hour before the planned gathering, the then-culture secretary Oliver Dowden had reminded the rest of England they must only meet in pairs outdoors.

On May 20, 2020, he said: “You can meet one person outside of your household in an outdoor, public place provided that you stay two metres apart.”

The PM plunged England into its first lockdown in March 2020. It was not until June 1 that groups of up to six were allowed to meet outdoors.

On May 10, the PM had announced a slight relaxing to the lockdown rules – from May 13, two people from separate households were permitted to meet outside in a public place provided they stayed two metres apart.

At the same time, he increased fines for people flouting the rules to at least £100.

The cabinet office inquiry into Downing Street party allegations is currently being carried out by senior civil servant Sue Gray.

She took over from Cabinet Secretary Simon Case due to allegations that he knew of at least one party himself.

The alleged drinks party on May 20 will form part of the ongoing investigations, with the inquiry due to report back this month.

When Mr Johnson was asked yesterday if he and his wife attended the party on May 20, he replied: “All that, as you know, is the subject of a proper ­investigation by Sue Gray.” Hannah Brady, spokeswoman for Covid-19 Bereaved Families For Justice, said: “My dad died just four days before this email was sent out. He was only 55 and was a fit and healthy key worker.

“Just like the rest of the country, my family had done everything we could to keep him and others safe during the lockdown.

“Those days will stay with me for the rest of my life, just like the families of the 353 people that died that day.

“To think that while it was happening Boris Johnson was making the ‘most of the weather’ and throwing a party for 100 people is truly beyond belief. At the time, everyone would have known that going to a party was wrong.

“So how can those running the country have thought it was OK? Could there be a more disgraceful example of ‘one rule for them, and another rule for the rest of us?’

“In September last year, I sat in that same garden, looked the PM in the eyes and told him how my dad had died. He told me he had ‘done everything he could’ to protect my dad, knowing he had partied in that spot the very day that dad’s death certificate was signed. It makes me feel sick.”

Human rights lawyer Adam Wagner, who interprets regulations on Twitter for the public, said the alleged event looked “unlikely to be legal for attendees”.

A Met police spokesman said: “The Met is aware of widespread reporting relating to alleged breaches of the Health Protection Regulations at Downing Street on May 20 2020 and is in contact with the Cabinet Office.”