Emmanuel Macron and Brigitte arrive in Cornwall for G7 Summit

The French President offered “le reset” of relations with the UK after a breakdown in trust between the two sides. The peace offering was made at the first in-person bilateral talks between the two leaders since the end of the EU transition period on December 31.

Frictions over the implementation of the Northern Ireland Protocol and fishing rights for French vessels have been continued points of friction since the UK broke free from the bloc’s control.

Mr Macron is understood to have told the Prime Minister the UK and France had plenty of common interests to co-operate on, but relations would only flourish if Britain backed down in rows over Brexit.

“The president told Boris Johnson there needed to be a reset of the Franco-British relationship,” a source, who spoke on condition of anonymity, said.

“This can happen provided that he keeps his word with the Europeans.” 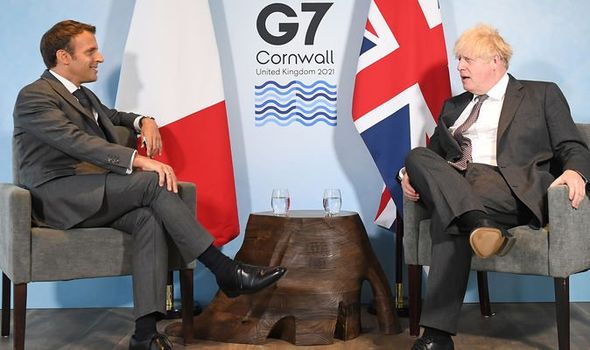 Despite Mr Johnson being fluent in French, having spent a number of years growing up and working in Brussels, it is understood the two leaders communicated in English throughout their meeting.

Mr Johnson is meeting a number of EU leaders for Brexit talks on the side of the G7 summit this morning.

After holding discussions with Mr Macron he held a meeting with Germany’s Angela Merkel.

He has also had discussions with the European Commission President Ursula von der Leyen and Europen Council President Charles Michel.

Brexit minister Lord Frost has joined Mr Johnson in Cornwall for the G7 and is expected to have sat in on the talks with the EU leaders.

Mr Macron, Ms Mekel, Italy’s Mario Draghi and the EU’s institutional leaders all met for talks yesterday afternoon to ensure they presented a united front in their individual talks with Mr Johnson.

Is is understood the EU told the Prime Minister they were ready to start a trade war with the UK over the fallout from Brexit.