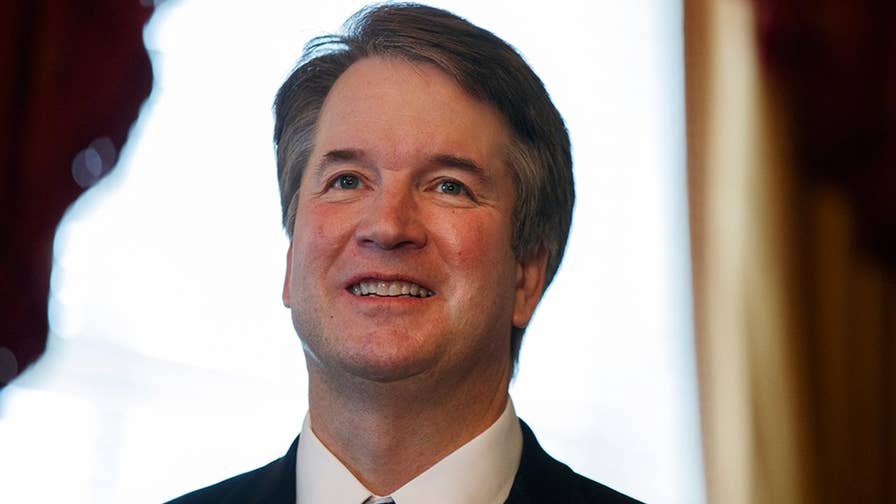 Democrats, Planned Parenthood and others on the left are trying to generate pseudo-hysteria by falsely demonizing Judge Brett Kavanaugh as being anti-woman in the days leading up to the Senate confirmation hearing Tuesday on his nomination to the U.S. Supreme Court.

While trying to portray themselves as champions of womankind, those fighting the nomination of Kavanaugh are instead insulting the intelligence of women and men with their absurd attacks.

The Kavanaugh opponents are trying to stir up uncontrolled and extreme emotions relating to the Roe v. Wade – the 1973 Supreme Court decision legalizing abortion nationwide – in their campaign to keep Kavanaugh off the nation’s highest court.

No one can credibly claim that Kavanaugh is not qualified to sit on the Supreme Court. He’s been a judge on the U.S. Circuit Court of Appeals for the District of Columbia since 2006. He has a sterling record since graduating from Yale Law School in 1990, including serving as a Supreme Court clerk, a lawyer in the White House Counsel’s Office, and White House staff secretary for President George W. Bush.

Judge Kavanaugh has shown beyond a shadow of a doubt that has an intentional, extraordinary record of helping women.

So instead of examining his qualifications or judicial record, those opposed to Kavanaugh are working overtime to smear his reputation with false charges.

And in addition to trying to derail the judge’s nomination, those opposing him are engaged in a cynical propaganda campaign of political fundraising. They are urging donors to give money to Democrats to defeat Republicans in the November midterm elections in order to block the confirmation of future judicial nominees advanced by President Trump.

The campaign to keep Kavanaugh off the Supreme Court has taken some strange and frankly disgusting turns. For example, a lame Planned Parenthood video, made with the help of the group’s friends at “Funny or Die,” tries to inject humor into the deadly serious topic of abortion. Excuse me for not laughing.

It used to be that abortion was discussed in a sober manner, even by those on the left. Remember when they claimed they actually wanted abortion to be “safe, legal, and rare?” Sadly, those days are long gone.

Now the pro-abortion forces are trivializing the pain and struggle of women confronted with the terrible choice of whether to have an abortion or instead grant their unborn child the right to live a full life.

In the Planned Parenthood video, which is designed to mobilize opposition to Kavanaugh’s nomination, an actor who is playing the part of a dumb and clueless conservative addresses women and says: “Basically, I’m here to explain to you, as a man, that you’re wrong about Brett Kavanaugh.”

Ha! See what they did there? Because only men support Kavanaugh, you see. So clever. The joke continues for what seems like an eternity, and the faux-conservative actor points out that Kavanaugh will be good for women because he has a “female wife, female mother, and female mother-in-law.”

The actor even says “ladies, let me talk to you like a lady” and switches to a falsetto voice. Thankfully, he doesn’t put on a wig and a dress for added comedic effect.

They make millions with these jokes. They kill at the Oscars.

But millions of women recognize this nonsense as phony, not funny. They reject the assumption that those of us who support the right to life for the unborn are anti-woman, and that pro-life women are traitors to the cause of women’s rights.

Instead of engaging conservative women in a respectful way and debating the record of Judge Kavanaugh, opponents of his nomination prefer to mock the pain of millions of women as one big joke. For example, NARAL Pro-Choice Oregon has partnered with an ice cream shop to sell abortion-themed ice cream. The oh-so clever flavor is called “Rocky Roe v. Wade.”

Why? Because the pro-abortion groups want women to celebrate abortions and promote them to girls.

Concerned Women for America (CWA), the organization I lead, has thousands of members around the country who support Judge Kavanaugh because he is a man of integrity who will uphold the Constitution as written, instead of bending it and giving it new meaning to promote his personal preferences.

I have written about Kavanaugh’s substantive record and why we can trust him. Our “Women for Kavanaugh” bus tour visited seven key states (Iowa, Indiana, West Virginia, Missouri, North Dakota, Alabama, and Florida) to win the support of senators for Kavanaugh. We have felt overwhelming support for the judge from women in those states and elsewhere once they look at his record.

But the Hollywood elites and others on the left will not engage conservative women in a meaningful way. So many of them live in a bubble where everyone thinks alike and everyone who doesn’t is dismissed outright. Their idea of engaging conservative women is “comedian” Michelle Wolf’s shameful treatment of Sarah Huckabee Sanders at the White House Correspondents’ Dinner in April, to the cheers of the liberal media.

With this myopic view of women, Kavanaugh’s opponents can say ridiculous things – like claiming that anyone who supports Judge Kavanaugh is “complicit in evil.” They can talk about “back-alley abortions” and make absurd claims that Kavanaugh “has a long history of not caring for women.” They know it is all lies, but they are hoping they will galvanize liberal support.

American women are not stupid. Millions are seeing clearly that we are being told lies about President Trump’s Supreme Court nominee. We realize that anyone nominated by this president to the Supreme Court – no matter how qualified – would face a torrent of opposition.

Judge Kavanaugh has shown beyond a shadow of a doubt that has an intentional, extraordinary record of helping women. In a letter to the Senate Judiciary Committee, all the women who served Kavanaugh as law clerks (unless prevented because of “current or pending employment”) wrote that he “has been one of the strongest advocates in the federal judiciary for women lawyers.”

Even many on the left are not buying what the radical left is doing with the nomination of such a well-qualified nominee.

Liberal feminist lawyer Lisa Blatt, who has argued more cases before the Supreme Court than any other woman, wrote for Politico: “Sometimes a superstar is just a superstar. That is the case with Judge Brett Kavanaugh, who had long been considered the most qualified nominee for the Supreme Court if Republicans secured the White House. The Senate should confirm him.”

Blatt has personal experience in her law career working with Kavanaugh that gives her a good perspective on the type of justice he will be.

Blatt had to admit, though, that “my friends on the left will criticize me for speaking up for Kavanaugh.” Yes. She is not toeing the liberal line, and there are real consequences for this.

Here’s the bottom line: Donald Trump is the duly elected president of the United States, even though that continues to drive his opponents crazy. He has carried out his duty to nominate an eminently qualified judge to serve on the Supreme Court.

The Senate should do its job and confirm Judge Brett Kavanaugh because he will clearly be an outstanding member of the United States Supreme Court.

Penny Young Nance is president and CEO of Concerned Women for America, the nation’s largest women’s public policy organization. She is the author of the book "Feisty and Feminine: A Rallying Cry for Conservative Women" (Zondervan 2016).

Trump’s Supreme Court nominee Kavanaugh: A look into his finances

Trump’s 8-9% prediction for US growth is just not possible, strategist says

Even More Evidence That Russia Is Still Meddling in U.S. Politics
Politics News