One of Sen. Kamala Harris’ most powerful messages while speaking during Judge Amy Coney Barrett’s Supreme Court confirmation hearing on Monday was also one of the most silent.

The Democratic vice presidential nominee prominently displayed a children’s book about the life of the late Supreme Court Justice Ruth Bader Ginsburg as she spoke out against President Donald Trump’s nomination of Barrett to replace the legal and feminist icon.

The book, “I Dissent: Ruth Bader Ginsburg Makes Her Mark,” appeared over Harris’ shoulder while the senator vocally dissented against Barrett’s appointment, arguing that it jeopardizes everything Ginsburg fought to protect.

“Justice Ruth Bader Ginsburg devoted her life to fight for equal justice and she defended the constitution,” Harris said. “She advocated for human rights and equality. She stood up for the rights of women. She protected workers. She fought for the rights of consumers against big corporations. She supported LGBTQ rights, and she did so much more.”

“But now, her legacy and the rights she fought so hard to protect are in jeopardy,” she continued. “By replacing Justice Ruth Bader Ginsburg with someone who will undo her legacy, President Trump is attempting to roll back American’s rights for decades to come.” 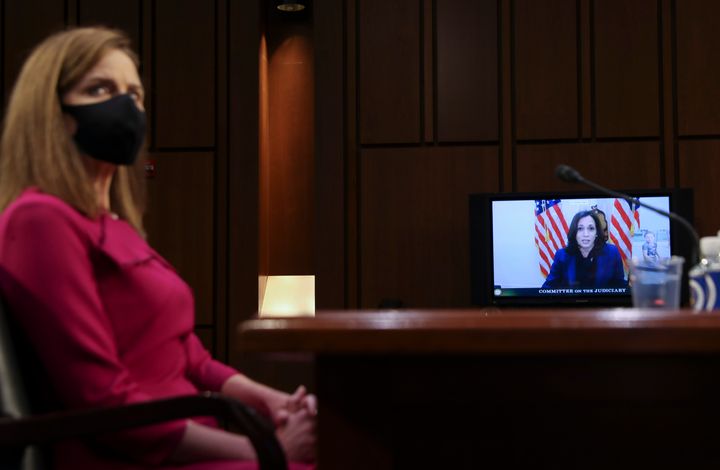 Prior to selecting Barrett to replace Ginsburg, Trump said he would appoint justices who would overturn the landmark Supreme Court decision in Roe v. Wade that protects the right to abortion.

Upon nominating Barrett, who is a strict Catholic, the president called her “conservative in her views” and rulings and said it “is certainly possible” that she could help overturn the historic 1973 decision.

Barrett, speaking before the Senate on Monday, expressed her own respect and admiration of Ginsburg and said that the Supreme Court must be independent and interpret the Constitution and laws “as they are written.”

“I have been nominated to fill Justice Ginsburg’s seat, but no one will ever take her place,” Barrett said. “I will be forever grateful for the path she marked and the life she led.”