The pro-Trump insurrectionists who stormed the Capitol on Wednesday got words of respect from Ivanka Trump.

While echoing her father Donald Trump’s halfhearted plea for the rioters to be “peaceful,” the lame duck president’s daughter deferentially addressed the mob as “American Patriots.”

“American Patriots ― any security breach or disrespect to our law enforcement is unacceptable,” wrote Trump, who holds a job as White House adviser. 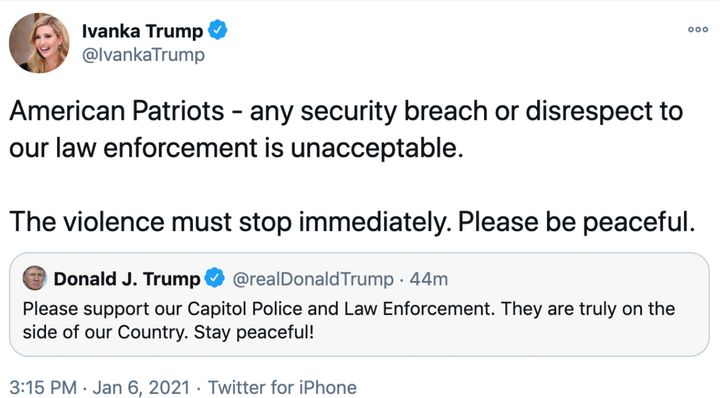 White nationalists, neo-Nazis and QAnon followers were reportedly among those Confederate flag-waving “patriots.”

CNN White House correspondent Kate Bennett asked Trump to clarify if she was calling the rioters “patriots,” prompting the White House adviser to walk back her wording.

“No. Peaceful protest is patriotic,” she said. “Violence is unacceptable and must be condemned in the strongest terms.”

Politico’s Jake Sherman, locked down during the siege, responded angrily. “American patriots? I’m sitting here in lockdown. The capitol has been breached and people have guns drawn. What are you talking about?” he wrote.

TheGrio White House correspondent April Ryan also chimed in. “You can delete the tweet, but you calling rioters ‘American Patriots’ will live on!” she wrote.

The president’s other adult children tried to meet the moment on social media.

Donald Trump Jr. urged followers not to “start acting like the other side.”

Eric Trump called for wrongdoers to be prosecuted.

And Tiffany Trump retweeted her father’s promise of a peaceful transition “even though I totally disagree with the outcome,” and she sent a much-maligned birthday wish to Eric amid the violence.