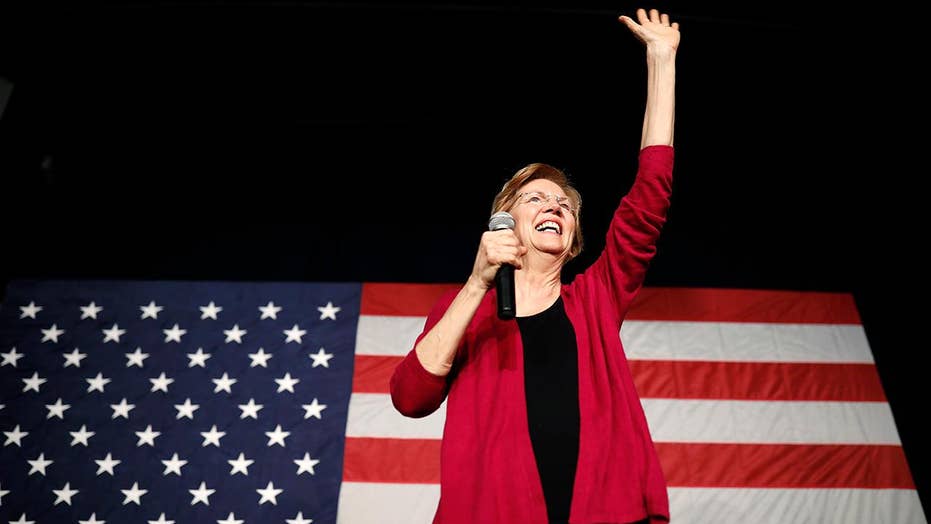 “The question isn’t whether he should be impeached anymore, he’s the most corrupt president in American history and we all know it,” blared an ad sponsored by potential Democratic presidential candidate and California billionaire Tom Steyer. “The question now is: how fast can we move past this president, so we can build a more just and prosperous future?”

While those ads were airing in the first in the nation primary state, Sen. Elizabeth Warren, D-Mass, was on the ground taking a totally different approach – barely ever mentioning the President by name.

“I think that our 2020 issue is how we talk about what we stand for, our affirmative vision as to how we build a country that reflects our best values,” Warren told FOX News.  “That’s what I try to talk about every chance I get.”

Warren outlined her biography and a platform that would focus heavily on regulating big corporations in a series of events statewide that attracted more than a thousand people.

WHO’S SERIOUS ABOUT RUNNING IN 2020? LOOK AT WHO’S CALLING THE POWERBROKERS

Twenty activists are now attached to a “Draft Beto,” movement, including a sought-after strategist in South Carolina.

Joe Biden apparently isn’t impressed with O’Rourke or Warren or anyone else in the field, so now he is weighing a campaign of his own.

“If you can persuade me there is somebody better who can win, I’m happy not to do it, but I don’t see the candidate who can clearly do what has to be done to win,” Biden is quoted by the New York Times as telling a Democratic official.

And he’s thinking about a presidential campaign too.

“I think we’re going to know within the next two months, I mean we have to,” Brown’s wife, Connie Schultz, said on CNN.

Even if a potential presidential candidates waits a little while to make up his or her mind – they’re likely to find a receptive audience by some likely caucus goers in Iowa.

“I’d like to hear a few more people, definitely,” Molly Wood said at a Warren event in Des Moines.  “I’ve liked her for a long time, but I’d definitely like to hear some other people, see what they’ve got going on.”

“There are so many running,” Whitehead, who says he likes Warren, said. “I’m not one to wait very long to decide. As soon as I’ve seen a few of them and seen more coverage on the news, and I do follow the news, I’ll make a decision.”

Sen. Joni Ernst says Senate has been damaged by the Kavanaugh confirmation process States With the Highest Number of COVID-19 Cases Texas says new coronavirus cases jumped by more than 10,000 for the first time

Upcoming Movies That Are Being Released Despite Coronavirus