Mike Bloomberg is trying to meme his way to the Democratic nomination for president, one sponsored Instagram post at a time.

On Wednesday evening, more than a dozen of the biggest meme accounts on Instagram shared screenshots of direct-message conversations with the former New York City mayor. In those posts, which are approved and paid for by Bloomberg’s campaign, he appears to make fun of himself for being old, rich and out of touch.

“Can you make a meme that lets the younger generation know I’m the cool candidate?” the 77-year-old billionaire appears to write in one DM conversation. “Please fax it over before the markets close.” Collectively, the meme accounts running these ads for Bloomberg have more than 60 million followers. 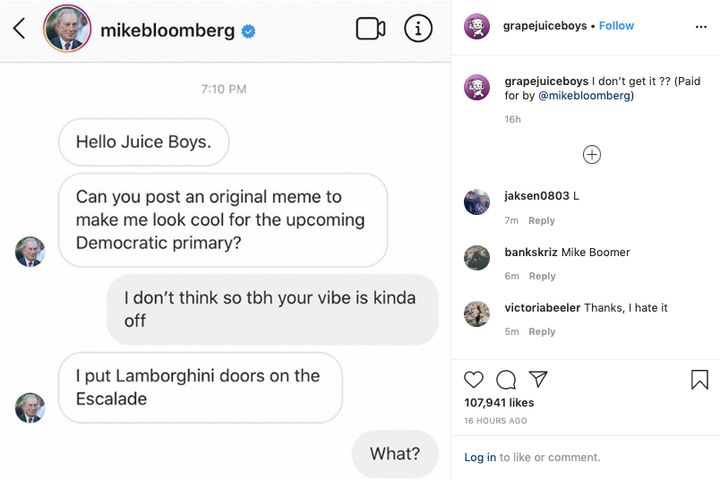 The memes are a joke, but they’re also emblematic of a campaign that’s spending extraordinary amounts of money to win support and gloss over his controversial record as mayor of New York City, during which he aggressively enforced stop-and-frisk policing and arresting marijuana users. The same night the sponsored Instagram posts went up, the Associated Press surfaced remarks that Bloomberg made in 2008 blaming the end of “redlining” — a discriminatory housing practice — for that year’s economic collapse.

Now, he’s using his colossal wealth to buy exposure online — and many influencers are helping him do it.

But at least one memer apparently declined the campaign’s proposition. Josh Ostrovsky, the man behind the Instagram account @thefatjewish (which has 11 million followers), left a comment on another user’s post claiming he had refused to run a Bloomberg ad for political reasons: “They asked me to do it, I said no. I grew up in New York City so I can tell you firsthand, Bloomberg is a colossal shitbag,” he wrote.

“From the subjugation of minorities through stop and frisk policies to his hardline anti-marijuana stance, dude is a total hoe,” added Ostrovsky, who was raised in Manhattan’s Upper West Side and briefly attended New York University while Bloomberg was mayor.

Bloomberg’s sponsored content blitz is a first among presidential candidates, marking a rare blend of political and influencer marketing. It comes on the heels of a Daily Beast report on the former New York City mayor’s plans to pay popular social media figures to boost his popularity. His campaign partnered with Meme 2020, a new digital media firm, to orchestrate the stunt, The New York Times reported. Its cost remains unclear.

The meme barrage is also a transparent attempt to make a joke out of  Bloomberg’s exorbitant campaign spending, which dwarfs that of his competitors, including fellow billionaires Donald Trump and Tom Steyer. Since joining the race in late November, Bloomberg has funneled more than $300 million of his own fortune into political advertising, and recently announced his intention to double that figure.

In one sponsored DM post, @fuckjerry, which has nearly 15 million followers, tells Bloomberg it will cost “like a billion dollars” to post a meme for him, to which Bloomberg replies, “What’s your venmo?”

In another, after the 3.5-million-follower page @kalesalad pushes back against a similar request to post a meme, Bloomberg counters, “I’ll give you a billion dollars.”

Bloomberg’s campaign did not respond to HuffPost’s request for comment. 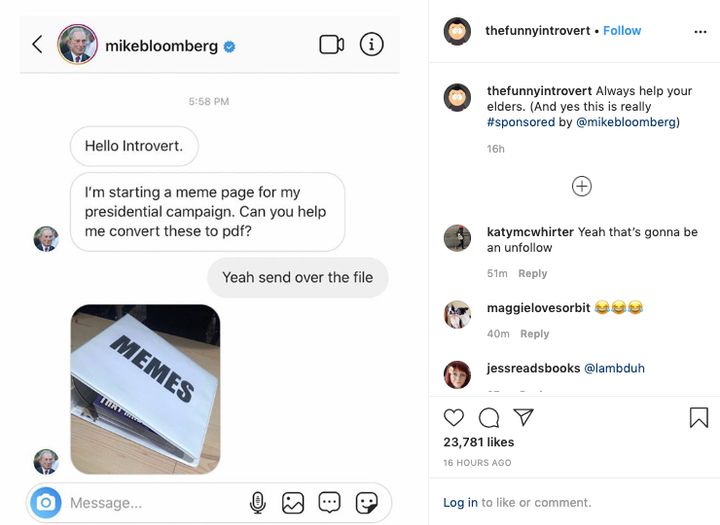 This isn’t the first time Bloomberg’s team has tried to use shock humor for political purposes. During a Democratic debate in January, for which Bloomberg did not qualify, his team sent out a series of bizarre tweets from the official @Mike2020 account. One post featured a picture of four meatballs with Bloomberg’s face photoshopped onto one and a caption that read, “Test your political knowledge: SPOT THE MEATBALL THAT LOOKS LIKE MIKE.”

Another tweet, which was later deleted, said, “When choosing your candidate, remember…Mike can fit nine D batteries in his mouth at one time.”

Bloomberg has also been trying to court young voters on Snapchat, where he has spent more than $500,000, once again blowing other candidates’ spending out of the water. There, his ads focus on climate change, gun safety and attacking Trump.

By Thursday morning, Instagrammers were using Bloomberg’s own meme against him.

The account @lushsux took a jab at the billionaire by posting a photoshopped DM conversation transcribing recently leaked audio in which Bloomberg made bigoted remarks about racial profiling. “Ninety-five percent of your murders — murderers and murder victims — fit one M.O. You can just take the description, Xerox it and pass it out to all the cops. They are male, minorities, 16 to 25. That’s true in New York, it’s true in virtually every city,” Bloomberg appears to write to the influencer.

“Bro I am worth $61.8 billion dollars. I do not give a single fuck if I have to pay each and every American directly to vote for me,” Bloomberg is shown saying in another fake, unsponsored conversation with @neighborhoodguymemes.

“I am going to buy the presidency.”