Home » Politics » Inaugural Security Is Fortified in D.C. as Military and Police Links Are Eyed in Riot

Thousands of armed National Guard troops were on their way to Washington to bolster security for next week’s inaugural celebration as federal investigators turned their attention to the difficult question of how many military and police personnel took part in the violent attack on the Capitol, a law enforcement official said on Thursday.

Adding to the tensions, dozens of people on a terrorist watch list were found to have been in Washington on Jan. 6 for pro-Trump events that ultimately devolved into the assault on the Capitol, according to two government officials briefed on the Justice Department investigation into the riot.

Most were suspected white supremacists, according to The Washington Post, which earlier reported on their status on the list. It was not clear how many people on the watch list were part of the mob that stormed the Capitol, but their presence in the capital adds to the urgent questions about security preparations for the events of Jan. 6.

The nationwide dragnet for those responsible for the worst incursion on the home of Congress since the War of 1812 has now entered its second week, and investigators are increasingly concerned that some of the attackers may have brought specialized skills to bear on the assault. So far, two off-duty police officers from a small town in Virginia and a retired Air Force lieutenant colonel from Texas are among the suspects with police or military links — a tiny fraction of the more than 100 people who have been taken into federal custody.

Still, videos and photos posted online have shown chilling scenes of rioters in tactical gear moving through the chaos inside the Capitol complex in tight formation and sometimes using hand signals to communicate with one another. Investigators are eager to determine whether any of these plotters were working together or had ties to law enforcement or the military.

The Pentagon was sufficiently concerned that members of the military might have taken part in the attack — or at least supported it — that the Joint Chiefs of Staff issued an unusual message to all military personnel this week, reminding them that President-elect Joseph R. Biden Jr. would soon be their commander in chief and that they were duty bound to defend the Constitution.

The Defense Department declined on Thursday to directly address whether any members of the military were in fact involved in the assault.

“We in the Department of Defense are doing everything we can to eliminate extremism,” said Garry Reid, the Pentagon’s director for defense intelligence. Mr. Reid added that all members of the military, including those in the National Guard, undergo extensive screening for participation in hate groups and militias.

Federal officials have already concluded that the swearing-in next week of Mr. Biden is a likely target for armed extremists and are expected to flood Washington with more than 20,000 members of the National Guard from 13 states.

The Secret Service, which is leading the effort to secure the ceremony, announced on Thursday that it would establish a “green zone” in downtown Washington this weekend, shutting down traffic and train stations as troops continue to flood into the increasingly militarized city. In a statement, the Secret Service added that most of the streets around the Lincoln Memorial and the Capitol would be closed from Saturday morning until the day after the inauguration.

And Customs and Border Protection planned to deploy aircraft to Washington to conduct surveillance over the inauguration, the agency said in a statement. Agents on the ground can watch video footage of the event in real time to spot potential threats.

Such preparations and precautions were necessary because the F.B.I. had picked up “an extensive amount of concerning online chatter” and was trying to discern between “aspirational” plots and actual threats, the bureau’s director, Christopher A. Wray, said in a televised briefing with Vice President Mike Pence. Mr. Wray said the scores of arrests already made in last week’s riot — and the fact that agents have so far identified about 200 suspects altogether — should “serve as a very stern warning to anyone else who might be inclined” to return to Washington to commit more violence.

“We know who you are, if you’re out there, and F.B.I. agents are coming to find you,” Mr. Wray said, adding, “Anyone who plots or attempts violence in the coming week should count on a visit.” 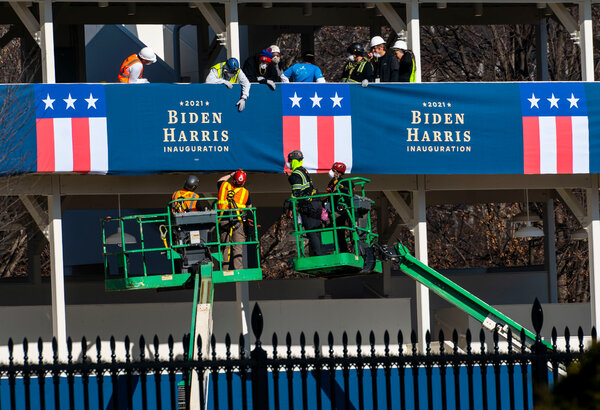 On Thursday alone, federal prosecutors unsealed charges against 12 defendants across the country, including one man who was captured last week in a viral image carrying a Confederate battle flag through a hallway of the Capitol. According to court documents, the man, Kevin Seefried of Delaware, went to Washington on Jan. 6 with his son, Hunter, to hear President Trump address a crowd outside the White House. Mr. Seefried brought along the Confederate flag that hung outside his home where, court papers said, it was “usually displayed.”

Prosecutors also charged Robert Sanford, a retired firefighter from Chester, Pa., in connection with the assault of a Capitol Police officer with a fire extinguisher. Like the Seefrieds, Mr. Sanford had gone to the White House to listen to Mr. Trump deliver his speech then moved on to the Capitol, following “the president’s instructions,” court papers say.

Mr. Sanford’s arrest was unrelated to the death of a Capitol Police officer, Brian Sicknick, who was said to have been struck in the head by a fire extinguisher, according to two law enforcement officials.

Later in the day, charges were unsealed against a man accused of beating a police officer on the Capitol grounds with a flagpole flying the American flag. According to a criminal complaint, the man, Peter Stager, claimed he thought the victim of the assault was a member of Antifa, the loose collective of leftist activists who have often sparred with far-right protesters, even though the words “Metropolitan Police” were clearly written on the officer’s uniform.

“Everybody in there is a treasonous traitor,” Mr. Stager said, in an apparent reference to the Capitol, according to a video obtained by the F.B.I. “Death is the only remedy for what’s in that building.”

Even as they pursued new leads and suspects, federal investigators also sought to verify an incendiary charge raised this week by several lawmakers: that some members of Congress had helped coordinate the attack.

On Wednesday, Representative Mikie Sherrill, a New Jersey Democrat and a former Navy pilot, called for an investigation, with more than 30 of her colleagues, into what they described as “suspicious” visits by outside groups to the Capitol on the day before the riot at a time when most tours were restricted because of the coronavirus pandemic. On Thursday, another lawmaker, Representative Mary Gay Scanlon, Democrat of Pennsylvania, said she had personally witnessed a tour of the building before the Jan. 6 attack by people who were “Trump supporters.”

A law enforcement official said investigators had yet to discover any evidence that members of Congress were involved in helping plan the attack, and cautioned that the inquiry was vast and that all leads needed to be carefully vetted.

The flurry of arrests and investigations added an air of nervous activity to a city that already seemed to be under siege. The area around the National Mall on Thursday was crammed with military vehicles and cut off from its surroundings by imposing lengths of metal fencing, creating what the Secret Service agent in charge of inaugural security called “a bubble that is safe and secure.”

As of Thursday afternoon, about 7,000 National Guard troops were in Washington, a number that was expected to rise to more than 20,000 by the time of Mr. Biden’s inauguration.

That, officials said, was roughly three times the total number of American troops deployed in Iraq, Afghanistan, Somalia and Syria.

Mr. Pence sought to reassure Americans about the inauguration.

“We are going to ensure that we have a safe inauguration, and President-elect Joe Biden and Vice President-elect Kamala Harris are sworn in as the president and vice president of the United States in a manner consistent with our history and traditions,” he said.