Home » Politics » In String of Wins, ‘Biden Democrats’ See a Reality Check for the Left

In String of Wins, ‘Biden Democrats’ See a Reality Check for the Left

Progressives are holding their own with moderates in fights over policy. But off-year elections suggest they need a new strategy for critiquing President Biden without seeming disloyal. 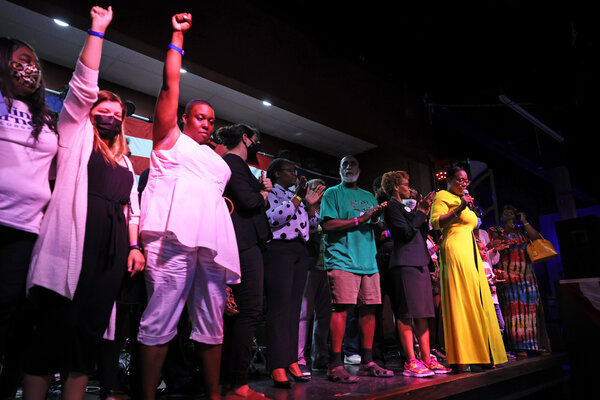 Nina Turner, the hard-punching Bernie Sanders ally who lost a special election for Congress in Ohio this week, had unique political flaws from the start. A far-left former state legislator, Ms. Turner declined to endorse Hillary Clinton over Donald J. Trump in 2016. Last year, she described voting for President Biden as a grossly unpalatable option.

There were obvious reasons Democratic voters might view her with distrust.

Yet Ms. Turner’s unexpectedly wide defeat on Tuesday marked more than the demise of a social-media flamethrower who had hurled one belittling insult too many. Instead, it was an exclamation mark in a season of electoral setbacks for the left and victories for traditional Democratic Party leaders.

In the most important elections of 2021, the center-left Democratic establishment has enjoyed an unbroken string of triumphs, besting the party’s activist wing from New York to New Orleans and from the Virginia coastline to the banks of the Cuyahoga River in Ohio. It is a winning streak that has shown the institutional Democratic Party to be more united than at any other point since the end of the Obama administration — and bonded tightly with the bulk of its electoral base.

In Ohio, it was a coalition strong enough to fell Ms. Turner, who entered the race to succeed Marcia Fudge, the federal housing secretary, in Congress as a well-known, well-funded favorite with a huge lead in the polls. She drew ferocious opposition from local and national Democrats, including leaders of the Congressional Black Caucus who campaigned for her opponent, Shontel Brown, and a pro-Israel super PAC that ran advertisements reminding voters about Ms. Turner’s hostility toward Mr. Biden.

Representative Hakeem Jeffries of New York, a top member of House leadership, said in an interview Wednesday that Democratic voters were clearly rejecting candidates from the party’s most strident and ideological flank.

Where some primary voters welcomed an angrier message during the Trump years, Mr. Jeffries said, there is less appetite now for revolutionary rhetoric casting the Democratic Party as a broken institution.

“The extreme left is obsessed with talking trash about mainstream Democrats on Twitter, when the majority of the electorate constitute mainstream Democrats at the polls,” Mr. Jeffries said. “In the post-Trump era, the anti-establishment line of attack is lame — when President Biden and Democratic legislators are delivering millions of good-paying jobs, the fastest-growing economy in 40 years and a massive child tax cut.”

In Washington, Democrats have worked to keep a delicate peace between the party’s centrist and left-wing factions, viewing collaboration as vital to enacting any kind of ambitious legislative agenda. The tense give-and-take has yielded victories for both sides: This week, a group of insurgent House progressives, led by Representative Cori Bush of Missouri, pressured Mr. Biden into issuing a revised eviction moratorium even after he had questioned his power to do so.

But moderate party leaders on Capitol Hill and in the White House are greeting the results from the off-year elections with undisguised glee, viewing them as a long-awaited reality check on the progressive wing’s claims to ascendancy. Mr. Biden’s advisers have regarded the off-year results as a validation of his success in 2020 — further proof, they believe, that the Democratic Party is defined by his diverse, middle-of-the-road supporters.