Home » Politics » In A Purple State That Trump Won, Andrew Gillum Is Happy To Hit Back

In A Purple State That Trump Won, Andrew Gillum Is Happy To Hit Back NORTH MIAMI, Fla. — Tallahassee Mayor Andrew Gillum hit back at President Donald Trump on Thursday during a visit to a largely Haitian community as part of his early-voting bus tour.

“I want to be clear about pushing back on the Trump-izing of America,” the Democratic nominee for Florida governor told a couple of hundred cheering supporters near the E. May Avil North Miami Public Library, his voice hoarse from weeks on the road. “He insults people who are different than he is. He wants us to strip away each other’s humanity so we don’t see each other as brothers and sisters anymore. I reject that brand of politics. We have to reject that brand of politics.”

Gillum is the first African-American nominee for governor in Florida history. Trump and GOP nominee Ron DeSantis spent much of their Wednesday night rally in Fort Myers attacking Gillum and warning their supporters that he was a “radical socialist” who would, if elected, turn Florida into Venezuela.

And DeSantis used his strongest language yet regarding an ongoing FBI probe into a lobbyist and longtime friend of Gillum and his dealings with the Tallahassee city government. In an exurban hockey arena across the state in deeply Republican Fort Myers, DeSantis said that while Gillum believes Trump should be impeached, Gillum had “accepted bribes” from an undercover FBI agent.

“Maybe we should impeach him!” DeSantis said, to which the crowd of 8,000 chanted, “Lock him up! Lock him up!”

There is no indication that Gillum is under investigation, and he has said the FBI told him he is not a target of the probe.

He did not address the charges in his remarks Thursday afternoon. He spent much of his time on the stage, set up in a parking lot across from North Miami High School, running through the highlights of his stump speech, including a promise to raise teacher pay and expand health care coverage.

He told his supporters that the best way to respond to Trump and DeSantis is to vote against them in early voting or on Election Day. “We have an opportunity on Nov. 6 to send a message to Donald Trump and to Ron DeSantis, to let them know that their politics have reached their limit,” he said. “If we vote, we win.”

That message was falling on receptive ears, in a poor community that has become a center for Haitian immigrants in recent decades.

“Andrew Gillum’s the guy,” said Pierre Charles, who teaches algebra to high school and community college students. He was born in Haiti and has lived in North Miami for 22 of his 47 years. He said that he and his colleagues have been underpaid forever and that he thinks Gillum would fix that. “We need someone to stand up for us.”

Camille Papin similarly planned to cast his ballot for Gillum inside the library. “I want a change,” said the 78-year-old Haitian native, adding that Republicans in Tallahassee have not helped him in the two decades he has lived in Miami. “These guys are doing nothing for me.” 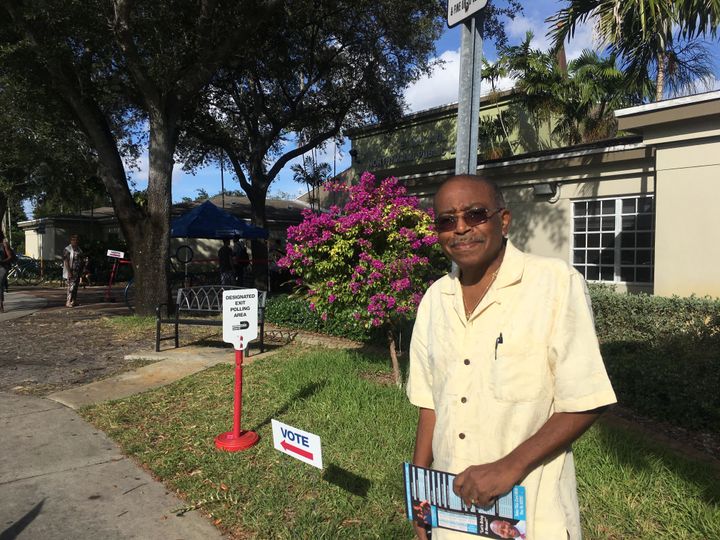 Gillum has spent the past eight days on a bus tour of the state to promote early voting. While he has flown ahead on some legs of the drive, he has been making multiple stops per day. Thursday morning began in Key West, the southernmost point in the continental United States and 832 miles by road to Pensacola, where the motor coach emblazoned with his likeness appeared on Wednesday.

While DeSantis has had Trump’s support since even before he officially started his campaign, Gillum had the endorsement of progressive favorite and likely 2020 presidential candidate Sen. Bernie Sanders ahead of the August primary, and since his surprise victory, has received campaign help from party stars like former Vice President Joe Biden and California Sen. Kamala Harris. On Friday he will be the beneficiary of the Democrats’ biggest name, former President Barack Obama, who is set to headline a rally for him in Miami.