The House of Representatives voted to strip Rep. Marjorie Taylor Greene (R-Ga.) of her committee assignments on Thursday over her embrace of racist and anti-Semitic conspiracy theories, as well as her support for executing prominent Democrats.

The Democratic-controlled House voted 230-199, mostly along party lines to pass a resolution to remove Greene from two influential committees: the House Education and Labor Committee and the Budget Committee. Only 11 Republicans voted for the resolution.

Democrats introduced the rare disciplinary measure this week after Republicans indicated they would not take steps to punish Greene after a wave of recent news reports further exposed her bigotry and conspiracy theory-addled worldview.

“None of us should take any pleasure in what we must do today,” Rep. Steny Hoyer (D-Md.) said in a speech just before the vote. “To do nothing would be an abdication of our moral responsibility to the House, to our colleagues, to the truth and to our oath. Yesterday, the Republican conference chose to do nothing.”

House Minority Leader Kevin McCarthy (R-Calif.) issued a statement on Wednesday that simultaneously denounced Greene and argued she should face less-harsh consequences for her actions.

“Past comments from and endorsed by Marjorie Taylor Greene on school shootings, political violence, and anti-Semitic conspiracy theories do not represent the values or beliefs of the House Republican Conference,” McCarthy said.

McCarthy added that he had offered Democrats a compromise — which reportedly would have seen Greene assigned to a single, lesser committee — but that the offer was declined. He called the Democratic resolution an “unprecedented step to further their partisan power grab.”

Democrats’ rare maneuver this week to independently remove a member of the opposition party from their committee assignments underscores the severity of Greene’s transgressions.

Greene, a fanatically loyal supporter of former President Donald Trump who came into office as a known believer in the unhinged QAnon conspiracy theory, was among the Republican lawmakers who helped incite the right-wing mob that stormed the Capitol on Jan. 6.

More recently, unearthed social media posts have shown Greene to be a believer in a multitude of other offensive conspiracy theories.

Media Matters also found that Greene had agreed with a commenter on Facebook who stated that the Sept. 11 terror attacks were “done by our own gov[ernment].” Another report showed Greene believed in the anti-Semitic conspiracy theory that a rich Jewish family was using space lasers to start forest fires.

Greene claimed in response to the CNN report that multiple people managed her Facebook account, and that some of the posts she liked and shared did not “represent” her views. 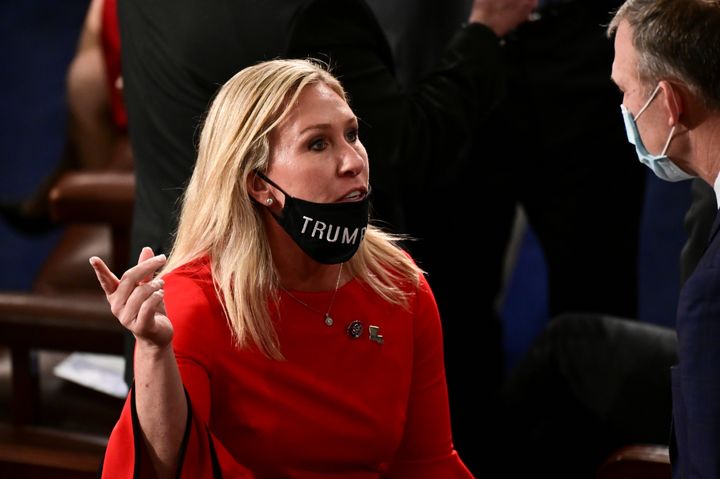 Greene reportedly apologized to her fellow Republicans for her embrace of conspiracy theories during a closed-door GOP meeting in the House on Wednesday. Sources told The Hill that Greene told her GOP colleagues “she made a mistake by being curious about ‘Q,’” — a conspiracy theory that baselessly claims Democrats are operating a global pedophile ring.

However, she sidestepped accepting blame for endorsing the school shooting conspiracy theories, according to The Hill, nonsensically claiming “she had personal experience with a school shooting.”

It’s unclear if she addressed her support for killing Democrats.

Some Republicans gave Greene a standing ovation after her remarks, according to multiple reports.

Greene also delivered a bizarre speech on the House floor Thursday ahead of the vote on whether to take away her committee assignments.

Although she conceded that school shootings were “absolutely real” and that the 9/11 attack “absolutely happened,” Greene still appeared to downplay the extremism of the QAnon movement. She claimed the media is “just as guilty as QAnon of presenting truth and lies to divide us.”

Her Democratic counterparts were unimpressed.

“I did not hear an apology or denouncement for the claim, the insinuation that political opponents should be violently dealt with … or retract the anti-Semitic or Islamophobic remarks,” Rep. Jim McGovern (D-Mass.) told the House in a speech after Greene’s remarks.

And Rep. Don Beyer (D-Va.) tweeted that Greene’s speech was “filled with whataboutism that concluded with comparing American journalists to violent QAnon conspiracy theories. She continued claiming to be a victim. She took no responsibility for advocating violence. She did not apologize.”

Prior to her speech on the House floor, Greene had launched a fundraising campaign off of Democrats’ efforts to oust her from her committees.

“UNREAL! $175,000!!,” Greene tweeted Wednesday night about the fundraiser. “Thank you to every single America First Patriot who donated to protect my Congressional seat from the Democrat mob. They are attacking me because I’m one of you.”

“We will not back down,” she wrote. “We will never give up!”

Some Democrats in the House are introducing resolutions to altogether expel Greene from the House, although the measures are unlikely to pass.

Lauren Boebert, who once expressed support for QAnon, accused Democrats of being 'obsessed with conspiracy theories'