More than a million ordinary Hong Kongers thronged the streets of the city and shut the government down in a stiffer-than-expected resistance to the growing power of China’s Communist Party, and delivered a stinging blow to Chinese President Xi Jinping.

The Hong Kongers, mostly young with a deep preference for democracy and elections over communism, showed nearly 30 years to the day after the Chinese massacre of students at Tiananmen Square that people can defeat the all powerful party.

While their massive protests have so far only delayed indefinitely the feared extradition bill, which Hong Kongers fear would extend the grip of China to their home city, Ho-Fung Hung, a professor at John Hopkins University, told Business Insider it’s still a win.

“I think it is a kind of a victory,” he said. “The one million people on the streets on Sunday caught people by surprise. The scale of the protest and the militancy of some of the protesters… nobody expected one week or two ago.”

And, according to Hung, that victory for ordinary Hong Kongers, translates to a loss for Xi, who counts on having total control of the government, military, and press to implement his policies and quiet any dissent.

“Beijing cannot, dare not push it too hard,” he said. Instead, Hung said, China is “worried that bigger turmoil will invoke international backlash they don’t want to bear,” so it will probably back off the bill.

That the Hong Kong protests remained completely leaderless also means it won’t be easy for Beijing to target any key figures, and must instead rehabilitate its image on the island through slower, more traditional means.

Xi’s loss of face in Hong Kong may have exposed the weakness of his authoritarian regime outside the mainland, and that’s unlikely to go away. 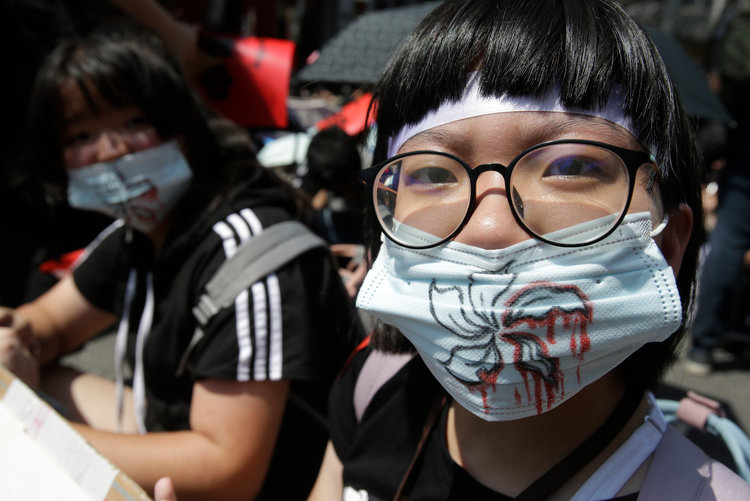 Supporters wear masks with bloody flowers painting for mourning to proposed extradition bill outside of the Legislative Yuan in Taipei, Taiwan, Sunday, June 16, 2019. Hong Kong residents Sunday continued their massive protest over an unpopular extradition bill that has highlighted the territory’s apprehension about relations with mainland China, a week after the crisis brought as many as 1 million into the streets. (AP Photo/Chiang Ying-ying)Associated Press

Recent reports from Taiwan, another breakaway province of China, indicates that even the country’s pro-China party has taken notice and come down on Hong Kong’s side of things. Taiwan’s current president, Tsai Ing-Wen, supports a more independent Taiwan, while her opposition has traditionally supported reconciliation with the mainland.

But following the Hong Kong protests, all of Taiwan seemed united against Beijing.

Asked if he would accept Taiwan getting closer to China by accepting the “one country, two systems” arrangement seen in Hong Kong, Han Kuo-yu, Tsai’s opposition, said ” over my dead body.”

Additionally, many Hong Kongers have moved to Taiwan over the years, with the pace accelerating after 2014 anti-China protests in Hong Kong.

But for the Chinese still living under the Communist party rule on the mainland, Hung said they’re unlikely to stand up to Xi.

Read more:The US just quietly challenged China on something Beijing promised to go to war over

If Chinese on the mainland ever protested like they did in Hong Kong, “the government can crack down more harshly like inXinjiang,” he said, referencing China’s far western province where reports indicate some one million ethnic and religious minorities have been imprisoned in reeducation camps, completely inaccessible to human rights investigators and the world.

“There’s no limit to how harsh they can go,” against the Chinese living on the mainland, Hung said.

But for the average youths in Hong Kong, they have dealt perhaps the world’s most powerful man a devastating slap in the face that will ring throughout the region for some time.