Many of the world’s most high-profile cultural, political and business powerhouses are willing to downplay or outright ignore China’s human abuses, which both the Trump and Biden administrations have said includes committing genocide against the Uyghur population.

Even amid calls for the U.S. and other countries to boycott the 2022 Beijing Winter Olympics, China can still depend on friendly treatment from around the globe, including from high-profile Americans.

Los Angeles Lakers star LeBron James, who hasn’t hesitated to take shots at Republican legislators and even Kyle Rittenhouse, has faced criticism for his posture toward the Chinese Communist Party. 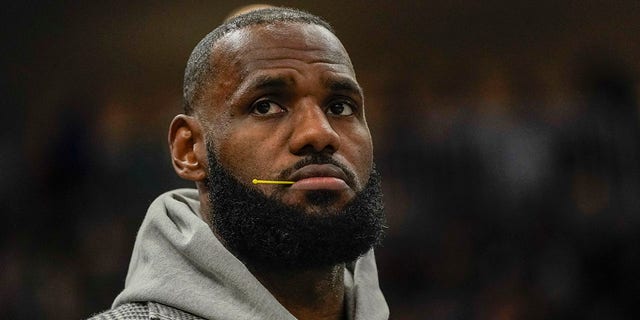 Los Angeles Lakers’ LeBron James watches from the bench during the second half of an NBA basketball game against the Milwaukee Bucks Wednesday, Nov. 17, 2021, in Milwaukee. The Bucks won 109-102.
(AP Photo/Morry Gash)

“I’m not here to judge how the league handled the situation,” James initially said in a scrum with reporters in October of last year. “I just think that, when you’re misinformed or you’re not educated about something – and I’m just talking about the tweet itself – you never know the ramifications that can happen.”

“We all see what that did, not only did for our league but for all of us in America, for people in China as well. Sometimes you have to think through the things that you say that may cause harm not only for yourself but for the majority of people. I think that’s just a prime example of that.”

In fact, the NBA itself came under fire after the organization called the Houston Rockets general manager’s post “regrettable” and said the post did not “represent the Rockets or the NBA.”

Enes Kanter of the Boston Celtics — a vocal critic of James and the Chinese Communist Party (CCP) — recently criticized the Lakers star for his sneakers showing “The King” bowing down to Chinese President Xi Jinping.

James isn’t the only player in the NBA kowtowing to the CCP, either — Brooklyn Nets star James Harden, while playing for the Rockets at the time, apologized to China for Morey’s comment.

The Lakers did not respond to Fox News’ request for comment.

Republicans have accused Special Presidential Envoy for Climate John Kerry of lobbying against a congressional ban on Uyghur forced labor in order to protect climate talks.

Kerry raised eyebrows earlier this month while responding to a question about whether or not he discussed the issue of Chinese forced labor used in developing technologies, like the production of solar panels.

The climate envoy said U.S. concerns regarding forced labor have been “articulated” to Chinese officials, but added, “That’s not my lane here.”

A spokesperson for the State Department defended Kerry’s stance at the time saying, “Secretary Kerry has a 37-year record as a senator and secretary of state standing up for human rights and defending democracy.

“As Secretary Kerry has said from the start, the United States and China have mutual interests in solving the climate crisis while there’s still time, even when we fundamentally disagree on other critical issues,” the spokesman added. 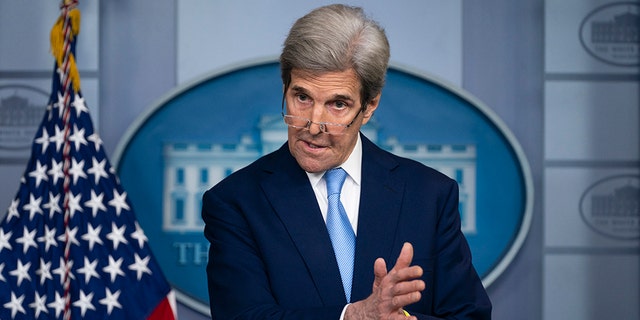 The criticism came two months after Kerry answered a question about China’s human rights abuses by explaining that “life is always full of tough choices” and that “first and foremost, this planet must be protected.”

“Well, life is always full of tough choices and the relationship between nations,” Kerry said at the time.

The former secretary of state then recalled when former President Reagan met with Soviet Union President Mikhail Gorbachev at the Reykjavík Summit in 1986, which ultimately resulted in the 1987 Intermediate-Range Nuclear Forces Treaty between the two countries. Kerry said Reagan “thought the Soviet Union was the Evil Empire” and yet still was able to sit down at the table.

“The point I’m making is that even as there were egregious human rights issues, which Ronald Reagan called them out on it, we have to find a way forward to make the world safer, to protect our countries and act in our interests,” he said.

“We can do and must do the same thing now,” he continued. “Yes we have issues, a number of different issues, but first and foremost, this planet must be protected.”

The World Health Organization’s coziness with the CCP has been a recurring story line of the COVID-19 pandemic, right from the start. On Feb. 4, 2020, the WHO warned against banning travel to and from China even as COVID-19 cases surged past 20,000. In the ensuing months, the WHO was quick to steer critics away from accusations of a cover-up, praising the CCP’s response instead.

The WHO joint report with China on the origins of the pandemic this past July had glaring errors even after it was delayed multiple times, sparking concern that the CCP was trying to skew the report to shift blame for the pandemic away from China.

Scrutiny of the report forced the WHO to promise to fix numerous “unintended errors” in the joint report with the communist party, including “changing the virus sequence IDs associated with three of the 13 early patients listed in a chart in the report and will clarify that the first family cluster was not linked to the Huanan seafood market in Wuhan.”

Most recently, while naming the new omicron coronavirus variant — all new strains have been named going down the Greek alphabet — the WHO opted to skip the letters “nu” and “xi” because “‘nu’ is too easily confounded with ‘new,’ and ‘xi’ was not used because it is a common last name.” Observers were quick to point out that the Chinese president’s last name is Xi.

The WHO did not respond to Fox News’ request for comment.

Nike CEO John Donahoe said on an earnings call in June that the shoe giant is “a brand of China and for China.”

“And the biggest asset we have in China is the consumer equity,” Donahoe said. “Consumers feel a strong, deep connection to the Nike, Jordan and Converse brands in China. And it’s real.”

Donahoe went on to say that the company intended to keep investing in its China operations as it reported better-than-expected revenues in its fiscal fourth quarter at that time. Its sales in China missed Wall Street expectations.

Sen. Tom Cotton, R-Ark., criticized the shoe company for the CEO’s comments, quipping that Nike’s stance on the Uyghur Muslim genocide happening in the country runs parallel with its slogan.

Nike did not respond to Fox News’ request for comment.

Similar to Nike, Apple has faced many controversies over the company’s labor choices when it comes to overseas manufacturing in China.

Between sweatshop accusations, noxious fumes, and factory suicides, Apple has struggled to quell concerns of its supply chain practices.

The company’s closeness with the Chinese government, including in its data operations, has also alarmed human rights advocates for years.

Apple has also folded to Chinese censorship demands time and time again, including in 2019 when it pulled an app used by Hong Kong protesters from its online store. The deletion came less than 24 hours after Apple was attacked by Chinese state media for not censoring the app.

Apple did not respond to Fox News’ request for comment.

Disney actively censors American media in Chinese markets to keep the CCP happy, going so far as to censor a Tiananmen Square joke from an episode of “The Simpsons” that was set in Hong Kong. 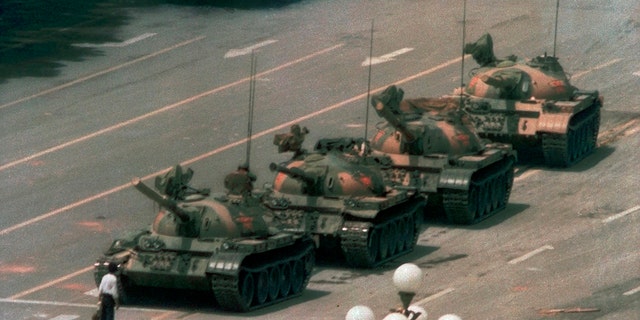 Disney’s penchant for complying with China’s communist censors is nothing new — the issue is so prominent that “South Park” famously lampooned Disney and other Hollywood giants in a 2019 episode responding to Chinese censorship of the show.

The company also came under fire last year after it was revealed that its live-action remake of the classic animated film “Mulan” was filmed in the Xinjiang region, where the CCP is alleged to have subjective Uyghurs to forced labor, forced political indoctrination, eugenics and internment camps.

Disney CFO Christine McCarthy later said that the footage it took in the Xinjiang region has “generated a lot of issues” for the company — even though Disney gave a special thank-you to the CCP government in Xinjiang for letting it film there.

Disney did not respond to Fox News’ request for comment.

JPMorgan Chase & Co CEO Jamie Dimon recently made headlines after he apologized for a joke about the CCP.

“I made a joke the other day that the Communist Party is celebrating its 100th year – so is JPMorgan,” Dimon said during an interview at Boston College last week. “I’d make a bet that we last longer.” 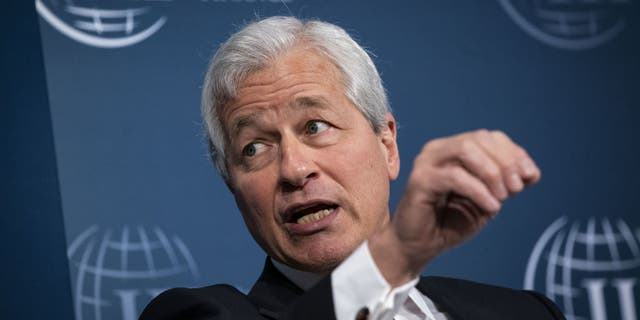 “I can’t say that in China,” he added. “They are probably listening anyway.”

A day later, Dimon walked back his comments — the latest instance in a long line of doing so.

“I was trying to emphasize the strength and longevity of our company,” he added.

A JPMorgan spokesperson emphasized that Dimon “acknowledges he should not speak lightly or disrespectfully about another country or its leadership” and “strongly supports a constructive and detailed economic dialogue with China.”

The reversal comes after Dimon made a visit to Hong Kong last week, his first since the COVID-19 pandemic began. During the 32-hour visit, Dimon stirred up controversy when he was able to skip quarantine after being granted an exemption by the Hong Kong government. Visitors typically are quarantined in a hotel for two to three weeks at their own cost.

Recently, Dimon has looked to expand the investment bank’s business in China. In March, JPMorgan announced a 10% stake in China Merchant Bank’s wealth management unit. JPMorgan also received approval from the China Securities Regulatory Commission in August to become the first full foreign owner of a securities brokerage in the country.

Dimon and and JPMorgan Chase did not return Fox News’ requests for comment.