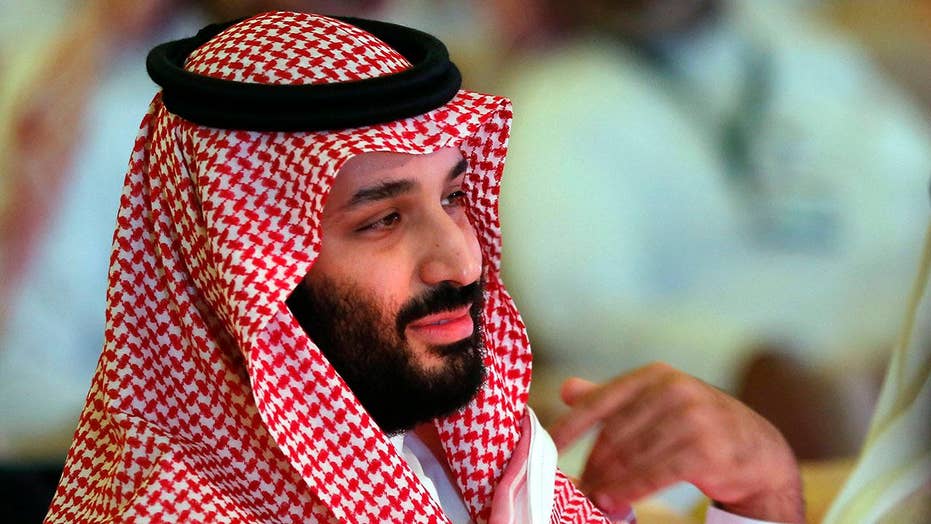 Senate looks to pull US support for Saudi forces in Yemen

Senate responds to Trump’s support of Saudi Arabia with a bill that would pull U.S. support from Saudi-led forces fighting in Yemen; Lt. Col. Bob Maginnis weighs in.

Republican senators briefed Tuesday by CIA Director Gina Haspel on the killing of Jamal Khashoggi immediately turned up the heat on Saudi Arabia Crown Prince Mohammed bin Salman, saying they are convinced more than ever that the prince was involved in the activist's death.

"If he was in front of a jury, he would be convicted in 30 minutes, guilty," Senate Foreign Relations Committee Chairman Bob Corker told reporters after the briefing.

South Carolina Sen. Lindsey Graham, who says he will push the Senate to vote on a resolution that finds the crown prince complicit in the murder, said one would have to "be willfully blind" not to come to the conclusion that Khashoggi's death was orchestrated and organized by people under the crown prince.

"There's not a smoking gun. There's a smoking saw," Graham said, referring to reports from the Turkish government that said Saudi agents used a bone saw to dismember Khashoggi after he was killed in the Saudi consulate in Istanbul.

Said Durbin in a statement: “While I cannot discuss the content of the briefing, it certainly reinforced my support for the bipartisan joint war powers resolution to end unauthorized U.S. military involvement in Yemen and the need for a stronger response by the U.S. and the Trump Administration to the murder of Jamal Khashoggi. Every Senator should hear what I heard this afternoon. CIA Director Haspel must brief the full Senate immediately.”

Schumer chimed in: “CIA Director Haspel should brief the full Senate without delay.”

Last week, Haspel did not attend a briefing about Khashoggi's killing that was given to all senators by Defense Secretary James Mattis and Secretary of State Mike Pompeo. Her absence upset lawmakers on both sides of the aisle, with Graham vowing to hold up Congress' agenda for the current lame-duck session until he heard from the CIA director.

Senators overwhelmingly voted last week to move forward on a resolution curtailing U.S. backing for the Saudi-led war in Yemen.

It's unclear whether or how that resolution will move forward. The vote last week set up debate on the measure, which could happen as soon as next week, but senators are still in negotiations on whether to amend it and what it should say.

TRUMP UNSURE WHETHER SAUDI CROWN PRINCE KNEW OF KHASHOGGI MURDER: ‘MAYBE HE DID AND MAYBE HE DIDN’T!’

Pompeo and Mattis tried to dissuade senators from punishing Saudi Arabia with the resolution, saying U.S. involvement in the Yemen conflict is central to the Trump administration's broader goal of containing Iranian influence in the Middle East. Human rights groups say the war is wreaking havoc on the country and subjecting civilians to indiscriminate bombing.

“Saudi Arabia is a strategic ally,” Graham tweeted after Tuesday’s briefing. “The relationship is worth saving. But not at all costs.”

U.S. intelligence officials reportedly have concluded that the crown prince, known informally as "MBS," must have at least known of the plot. However, the CIA's findings have not been made public and President Trump has equivocated over who was to blame. Following the Nov. 28 briefing, Pompeo and Mattis told reporters there was no direct evidence tying MBS to Khashoggi's murder.

Khashoggi was killed Oct. 2 in what U.S. officials have described as an elaborate plot at the Saudi Consulate in Istanbul, which he had visited for marriage paperwork.

Trump has said it may never be known who was responsible for the killing, and in public comments — and a long and unusual statement last week — he reinforced the United States' long alliance with the Saudis.

California Gov. Brown on Trump: ‘Something’s got to happen to this guy…he’s going to undermine America’

Taibbi: Chatting With Bernie Sanders About a Looming Financial Crisis

Vote no on Brett Kavanaugh’s confirmation