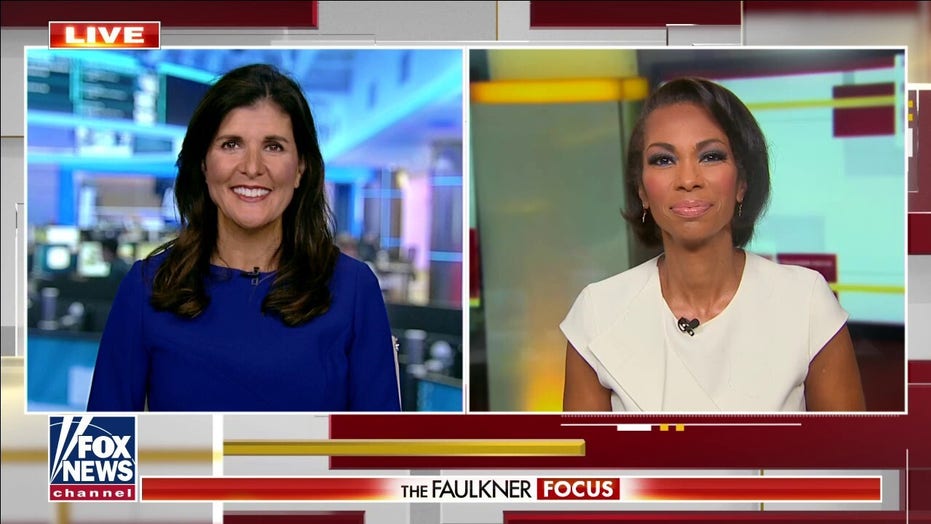 Nikki Haley: Biden admin trying to scare parents into not pushing back on local school boards

Former U.N. ambassador Nikki Haley on GOP attorneys general slamming the Department of Justice for targeting parents who push back against school boards.

Republican members of the Senate Judiciary Committee sent a letter to Attorney General Merrick Garland calling on him to tell Americans that the Justice Department will not and should not attempt to silence people who vocalize opposition to their state and local school board policies. The letter was a response to a memo sent to DOJ employees that sparked concern federal authorities would investigate those who do just that.

Garland’s memo discussed efforts to have federal authorities intervene in order to combat violence, threats, harassment and intimidation against school officials. Republicans have expressed concern that this is too vague and broad and that it gives the impression that parents who strongly voice their opposition to policies will find themselves facing federal investigation.

“We are concerned about the appearance of the Department of Justice policing the speech of citizens and concerned parents,” the letter, sent Thursday by senators led by committee ranking member Sen. Chuck Grassley, R-Iowa, stated. “We urge you to make very clear to the American public that the Department of Justice will not interfere with the rights of parents to come before school boards and speak with educators about their concerns, whether regarding coronavirus-related measures, the teaching of critical race theory in schools, sexually explicit books in schools, or any other topic. Furthermore, we urge you to instruct the FBI and the various United States Attorneys to make clear in the meetings discussed above that speech and democratic processes, like those that occur at a local school board meeting, must be respected.”

The Republicans acknowledged that actual violence and clear threats of imminent violence “are not protected speech and have no place in the public discourse of a democracy,” while stating that many examples that have been given were nothing more than “heated encounters.”

Garland’s memo came days after the National School Boards Association sent a letter asking the Biden administration to help combat attacks, threats and intimidation against school officials. The letter called for the use of various measures including the PATRIOT Act – a tool used to combat terror – to address their concerns.

“‘True threats’ encompass those statements where the speaker means to communicate a serious expression of an intent to commit an act of unlawful violence to a particular individual or group of individuals,” the Republicans’ letter said, referencing a legal standard established in a 2003 Supreme Court decision. “Parents who are angry at school board members, and even verbally attack them on a personal level, are not necessarily making true threats, and it is not the job of law enforcement – and cannot be the job of law enforcement, especially the FBI – to make sure parents are nice to their elected officials. They are certainly not domestic terrorists who require the use of tools such as the PATRIOT Act and the expertise of the National Security Division.”

The GOP committee members pointed to how the NSBA’s letter referenced a news article in which several incidents were mentioned, such as large crowds showing up at meetings to address issues that were not on the agenda, and people refusing to to wear masks at a meeting in protest of a school district’s requirement for students to wear masks.

“Large numbers of citizens expressing their concerns in an appropriate forum is not a matter for law enforcement, and it is even more difficult to imagine what role federal law enforcement would play in such a scenario,” the letter states.

The Republicans also stated that the mask refusal looks “a lot like civil disobedience in protest of public policy, a tactic often embraced as virtuous by Democrats when it comes to policies they oppose.”

Even if not wearing masks did violate the law, they said, “at most it is a petty offense wholly unworthy of the federal government’s attention[.]”

The letter concluded by saying that it is inappropriate for the federal government to use its “awesome powers” in order “to quash those who question local school boards.”

“By even suggesting that possibility,” it added, “important speech by American citizens will be chilled in school board meetings across this country. Your job now is to make clear to all stakeholders and the American people that such action is decidedly not the role of the federal government nor the role of any other government in the United States – in fact, it can never be.”

At a hearing earlier this week, Deputy Attorney General Lisa Monaco claimed that the government would only be getting involved in actual violence – despite the memo’s inclusion of harassment and intimidation – and that it would not be monitoring school board meetings.