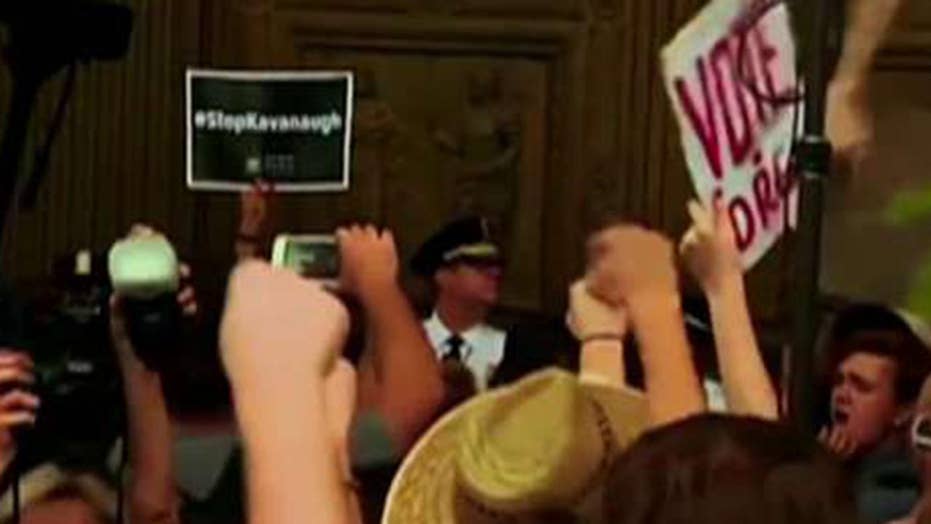 RNC spokeswoman Ronna McDaniel calls for a return to civility ahead of the midterm elections.

Liberal protesters – egged on by Democratic politicians – are openly embracing a more confrontational and aggressive approach, banging on the doors of the Supreme Court, confronting lawmakers outside their offices and chasing GOP officials out of restaurants.

And Republicans are quickly seizing on that spectacle to hammer a new midterm message, decrying the “mob” behavior and warning that Democrats would bring that mentality into the majority should they prevail in November's election.

"The radical Democrats have turned into an angry mob," President Trump said at one of many recent campaign-style rallies, a message he's repeated over and over.

The video includes footage of former Attorney General Eric Holder saying, “When they go low, we kick them." It shows California Democratic Rep. Maxine Waters saying, “If you see anybody from that Cabinet in a restaurant, in a department store, at a gasoline station, you get out and you create a crowd and you push back on them and you tell them they’re not welcome anymore, anywhere.”

It shows House Democratic leader Nancy Pelosi saying, "I just don't even know why there aren't uprisings all over the country.” It shows New Jersey Democratic Sen. Cory Booker telling protesters to “get up in the face of some congresspeople.” And it shows Hillary Clinton, in a television interview this week, saying, “You cannot be civil with a political party that wants to destroy what you stand for, what you care about.”

Over those comments is footage of Sen. Ted Cruz, R-Texas, and his wife Heidi being recently hounded out of a restaurant by protesters peppering the senator with questions about Kavanaugh and chanting “we believe survivors.” It also showed footage of protesters banging on the doors of the Supreme Court.

But Democrats — as well as some sympathetic figures in the media — are defending the protests and arguing the “mob” label is unfair, even though the term was regularly used by critics to refer to the Tea Party protests during the Obama administration.

“Women across the country came together around this nomination to say #MeToo, to stand up against sexual abusers and harassers,” Senate Democratic Leader Chuck Schumer, D-N.Y., tweeted this week, referring to the protests against Supreme Court Justice Brett Kavanaugh. “And all Donald Trump, Mitch McConnell, and Republican leaders have to say to them is that they're a mob. Disgraceful.”

Some media figures, including CNN anchors Don Lemon and Brooke Baldwin, also have taken offense at the word “mob” being used to describe protesters.

“Is it mob behavior? No, it’s not mob behavior. It’s people who are upset and they’re angry with the way the country is going,” Lemon said this week.

In another television segment this week, Baldwin took exception to the use of the term when discussing Cruz and his wife being pestered out of a restaurant by protesters.

“Oh, you’re not going to use the mob word here,” Baldwin said to a guest, adding: “Stop, stop. A mob is what we saw in Charlottesville, Virginia two Augusts ago.”

Guest Mary Katharine Ham chimed in, “If it were Tea Partiers, we’d call it a mob.”

During the Tea Party movement, where conservative grassroots activists rallied against big government and taxes after Barack Obama’s election to president, it was not uncommon for media figures to call the protests a “mob.”

“Beneath the surface, the Tea Party is little more than a weird and disorderly mob,” Rolling Stone writer Matt Taibbi wrote in 2010.

“Mob” is defined as “a disorderly or riotous crowd of people,” according to Dictionary.com.

Meanwhile, Republicans, like Rep. Steve Scalise, R-La., who was critically wounded at a Republican baseball practice last year, are warning the heated protests could lead to worse.

SCALISE: WHEN DEMS CALL FOR VIOLENCE, THAT’S A DIRECT THREAT TO OUR DEMOCRACY

“As a survivor of a politically motivated attack, it is tragic to think this is an acceptable state of political discourse in our country,” Scalise wrote in a Fox News op-ed this week. “I refuse to stand for this and I will continue to call for an end to it. A healthy, strong democracy is not possible if anyone lives in fear of expressing their views.”

Sen. Rand Paul, R-Ky., who was at the baseball practice when Scalise was shot and later had six ribs broken after being tackled in his yard, said in a radio interview this week he is concerned things could become deadly.

"I fear that there's going to be an assassination," Paul told a Kentucky radio show. "I really worry that somebody is going to be killed, and that those who are ratcheting up the conversation … they have to realize they bear some responsibility if this elevates to violence."

The confrontational tone, though, has flared on both sides. Pennsylvania GOP gubernatorial candidate Scott Wagner is taking heat for a video where he threatened to "stomp" on Gov. Tom Wolf's "face with golf spikes." A spokesman for Wagner, Andrew Romeo, said Friday, “Scott's comments were not to be taken literally. He wanted them to be a metaphor for how he will approach the final stretch of the campaign.”

Rosh Hashana has a message for people of all faiths