Home » Politics » From icy stares to fiery floor speeches, Democrats are demanding contrition from the Republicans tied to the January 6 MAGA attack before they'll work together again

From icy stares to fiery floor speeches, Democrats are demanding contrition from the Republicans tied to the January 6 MAGA attack before they'll work together again

Riot-rattled Democrats want to hold accountable — and in their dream scenarios, squeeze remorse out of — Republican lawmakers who voted January 6 to overturn the presidential election results.

The pressure campaign ranges from shooting icy stares in the US Capitol’s marble hallways and blasting conspiracy theorists in fiery floor speeches to reconsidering past alliances that have helped shepherd personal interests through the hyperpartisan body.

“There are other Republicans that I can work with,” Sen. Mazie Hirono, a Democrat of Hawaii, told Insider on Capitol Hill.

Hirono is one of seven senators who asked the Senate Ethics Committee to investigate Republicans Ted Cruz and Josh Hawley’s involvement in the electoral challenges that helped spur on the pro-Trump mob.

She’s putting the onus on the insurrectionists to fix things.

“If they want to work with me on something, they should contact me. But I’m not holding my breath,” Hirono said. “I”m not vetoing anything from them. But I need to see some effort on their part.”

More than two months since the attack on the Capitol left lawmakers — and much of the nation shaken — tensions remain high on the House side as well.

“Any elected Member of Congress who aided and abetted the insurrection or incited the attack seriously threatened our democratic government,” Lofrgen wrote, adding that the Trump enablers “betrayed their oath of office and would be implicated in the same constitutional provision cited in the Article of Impeachment.”

One thing Rep. Madeleine Dean, a Democrat of Pennsylvania said she took away from January 6 is being choosier about legislative partners.

“I don’t want to be co-lead with somebody who voted against certification,” she told Insider March 10 during a Clubhouse event.

Dean said she’s talked about this new stance with Republicans who’ve worked with her before. “I hope you will support worthy legislation. And I hope you’ll respect the line I need to draw,” is part of her updated pitch, she said.

But owning up to egregious mistakes has to be a part of it. “They say, ‘You know what, I got it wrong. That vote was a mistake. The president’s lie was a lie.’ Then I’m happy to work with them,” Dean said.

Republicans who endorsed throwing out electoral votes that put President Joe Biden in the White House maintain they haven’t noticed much difference as far as legislating is concerned.

The Senate Republicans who sought to disqualify the 2020 electoral results from Pennsylvania after witnessing the deadly Trump-supporter led riot on Capitol Hill included Cruz of Texas, Hawley of Missouri, Cindy Hyde-Smith of Mississippi, John Kennedy of Louisiana, and Rick Scott of Florida. New arrivals Cynthia Lummis of Wyoming, Roger Marshall of Kansas, and Tommy Tuberville of Alabama also joined in.

A majority of House Republicans — nearly 140 — did their part to placate former President Donald Trump, voting to invalidate the same results.

Whereas some may struggle to shore up support for pet projects as still shell-shocked Democrats weigh their allegiances more carefully, Scott has already found several takers.

A handful of Senate Democrats have cosponsored bills Scott introduced since the riot. Current collaborators include Kyrsten Sinema of Arizona, Jacky Rosen of Nevada, and Connecticut colleagues Richard Blumenthal and Chris Murphy. Scott told Insider he’s also hashing out a project with Maria Cantwell of Washington.

Others may discover that willing partners are in short supply. 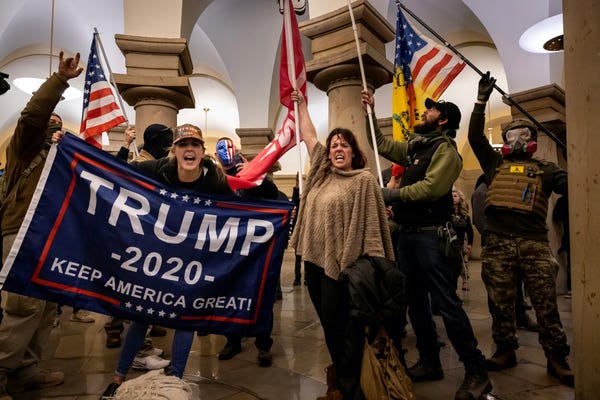 Kaine, who joined Hirono, Blumenthal, Sheldon Whitehouse of Rhode Island, Tina Smith of Minnesota, Ron Wyden of Oregon, and Sherrod Brown of Ohio in lodging the ethics complaint in the Senate, said he did so in order to ratchet down hostilities.

“There were those who were calling for them to resign or to be censured,” Kaine said of the immediate aftermath.

He decided that the best course of action was to “give it to the most bipartisan committee there is.”

“They’ll get the fairest hearing there. And then let’s set it aside and just go forward,” Kaine said of his thinking in calling for an official investigation.

Writing people off just isn’t his style, he added.

“Ted and I are on Foreign Relations together,” Kaine told Insider.  “So when we can find common cause, my door’s open and I imagine his is too.”

Blumenthal didn’t mention his work with Scott but spoke cautiously about other potential entanglements. “I am not working on any specific legislative proposal right now with either Hawley or Cruz,” he told Insider.

It’s too early to tell if that pullback becomes the norm for the Senate’s resident bomb-throwers.

One bellwether may be if Tammy Duckworth, a Democrat of Illinois, withholds her support for Hawley’s latest boating safety bill. Duckworth cosponsored previous drafts but has not yet signed onto the 2021 proposal.

Duckworth’s office did not immediately respond to questions about working with Republicans who challenged the election results.

Scott said he’s been treated the same before and after January 6.

“They didn’t talk to me before that,” he told Insider. “Nothing’s changed.”

He said he’s used to being ignored by now-Senate Majority Leader Chuck Schumer of New York and Democratic Whip Dick Durbin of Illinois.

“This place is so partisan, they don’t come sit and talk to me. I mean, Joe Manchin’s almost it,” he said, citing the centrist from West Virginia who wields a lot of power in the narrowly divided Senate.

Instead, Scott said he focuses on building relationships at the committee level. That’s where he’s connected with Sinema, Rosen, and others.

Cruz told Insider no Democrats, so far, have refused to work with him as punishment for the January 6 vote.

Cruz declined to mention any projects he’s sought bipartisan support for in recent weeks, saying only that he’s working on “the business of the Senate.” He’s introduced 18 bills so far this session, none of which have drawn Democrat cosponsors.

Freezing out the other party entirely is simply untenable, the majority of lawmakers who spoke to Insider for this story agree — even though Democrats have so far gone it alone on the $1.9 trillion stimulus Biden signed into law Thursday.

Murphy of Connecticut, though disappointed by the January 6 vote, said holding grudges accomplishes nothing.

“As distasteful as it was to see a dozen of my colleagues attempt to overturn a Democratic election, we still have to do the business the country demands,” he told Insider.

Republicans clearly didn’t bite on the partyline-passed relief plan. But Murphy said there are glimmers of hope for cooperation elsewhere.

“They continue to support the president’s nominees. And I don’t see any outward signs that they are completely abandoning the prospects of working together,” he said.

Sen. Robert Menendez was blunter about having to reach across the aisle in the 117th Congress.

“You still gotta get 60 votes here,” the New Jersey Democrat, told Insider. ” I learned how to count to that in grade school.”