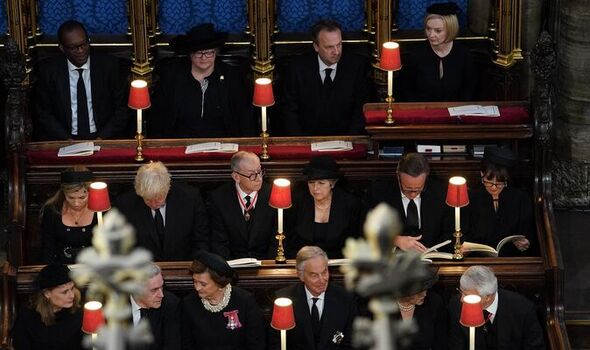 Sir John Major, Sir Tony Blair, Gordon Brown, David Cameron, Theresa May and Boris Johnson arrived together with their spouses. The former premiers spoke to the Queen every week during their tenures and have told how they relied on the wisdom and advice she gave during the private meetings.

Liz Truss, who became Prime Minister in an audience with the Queen just two days before her death, read the second lesson for mourners gathered in Westminster Abbey.

Taken from John 14, the lesson is one of comfort, evoking the promise of eternal life in Heaven.

World leaders were among the 500 guests who attended the funeral.

Most gave up their usual motorcades to be bussed in from Chelsea under the tightly controlled security operation that has been in the planning for decades.

US President Joe Biden and first lady Jill Biden were granted permission to arrive in “the Beast”, the fortified presidential limousine.

But Russia and Belarus were excluded following the invasion of Ukraine while Taliban-ruled Afghanistan, Myanmar’s military junta and Syria’s Bashar Assad were also left off the guest list.

Chinese vice-president Wang Qishan was allowed to attend in place of President Xi Jinping, despite fury from MPs and peers after seven UK MPs and peers were sanctioned by Beijing.

The funeral was also attended by Cabinet ministers, including Business Secretary Jacob Rees-Mogg, who arrived wearing a black top hat.

In a sign of the political change in Northern Ireland since the end of the Troubles, Sinn Fein vice president Michelle O’Neill also paid her respects to the Queen.

Labour leader Sir Keir Starmer said the service was a time for “reflection and deep respect” and described how the events of the past 10 days had united people.

“It showed the United Kingdom for what it really is, this fantastic country able to convene and bring people together,” he said ahead of the service.

As well as the global political elite, the funeral brought together ordinary citizens who have made a difference through public service.

Almost 200 people who were recognised in the Queen’s Birthday Honours were invited, including those who made extraordinary contributions to the response to the Covid-19 pandemic and those who have volunteered in their local communities.