Rep. Val Demings launched her 2022 U.S. Senate campaign against Sen. Marco Rubio on Wednesday accusing the incumbent Republican of failing to show up for Florida while promising she’d “never tire” of doing the right thing on behalf of the Sunshine State.

“My mother told me when someone gives you the opportunity to do something big: Do not disappoint them,” Demings, D-Fla., said in her campaign kickoff video. “I’m running for the United States Senate because of two simple words, never tire.”

In an interview with the Orlando Sentinel, Demings acknowledged she’s in for a “tough fight” against the two-term senator and former presidential candidate, but called out Rubio for voting against coronavirus relief aid this year, which included another round of stimulus checks. She said she’d stand up against laws that suppress voting and discriminate against transgender youth and would vote to eliminate the Senate filibuster to protect “basic rights.”

“We are dealing with some critical issues,” Demings told the paper. “And we need bold, courageous leaders to deal with those issues. And the bottom line is, too many times Marco Rubio did not show up. And when he did, he did not have enough courage to fight for Florida.”

Demings spent nearly three decades in law enforcement, rising through the ranks to become the Orlando Police Department’s first female police chief. Last year, she was seriously considered as then-presidential nominee Joe Biden‘s running mate. Because of her background, some Democrats say it would be hard for Republicans to pin the “socialist” label on her.

But Rubio was quick to tie Demings to the most far-left elements of the Democratic Party.

“None of them will admit to being a socialist,” Rubio told Fox News in a recent interview. “She probably won’t. But she certainly has voted for socialist things.” 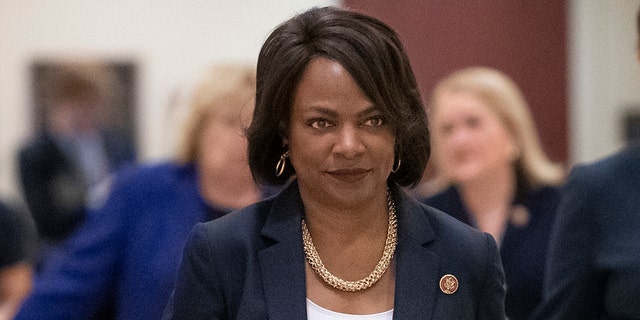 Demings announcement video was heavy on her biography – growing up “poor, Black and female” in Jacksonville, advancing her police career as a “working mom” and rising through the ranks to eventually become Orlando Police chief where her campaign touted her efforts to drive down violent crime. Demings said she’s been inspired by her mother’s motto of “never grow tired of doing good” as she entered a career of public service as a congresswoman.

Demings alluded to her high-profile role as an impeachment manager in prosecuting the first case against former President Trump saying she “brought law and order to a lawless president.” Now, Demings said she’s running against Rubio to fight against “backwards solutions” and “old tired ways of doing business.”

Rubio’s campaign immediately shot back and accused Demings of being too similar to House Speaker Nancy Pelosi, D-Calif.

“Marco’s contrast with Val Demings could not be greater because she has no record of results for Florida,” said Rubio campaign manager Mark Morgan. “Since coming to Washington, she has voted with Nancy Pelosi nearly 100% of the time. She supported efforts to defund the police, opposed tax relief for working families, and led the effort to put Washington in charge of Florida’s elections.

“Florida deserves a Senator with a proven track record of fighting, and winning, for Florida families,” Morgan said.