Elizabeth Warren Wants To Give Social Security Beneficiaries A Raise Democratic presidential hopeful Elizabeth Warren unveiled another plan Thursday, this time to increase Social Security benefits across the board and extend the program’s solvency by 19 years.

The senator from Massachusetts is proposing increasing monthly benefits for current and future beneficiaries of the retirement, disability and survivors insurance program by $200 a month for a total of $2,400 more a year. That top-line benefit increase ― along with an assortment of other benefit improvements ― would lift an estimated 4.9 million people out of poverty, according to an independent analysis of the plan conducted by Mark Zandi, the chief economist of Moody’s Analytics, which Warren’s campaign released alongside the proposal.

Her plan finances the changes by increasing taxes on the 2% of Americans making $250,000 a year or more. The additional revenue is enough to push back the date of the program’s impending funding gap from 2035 to 2054, according to Zandi.

“We need to get our priorities straight,” Warren wrote in a Medium post outlining the plan. “We should be increasing Social Security benefits and asking the richest Americans to contribute their fair share to the program.” 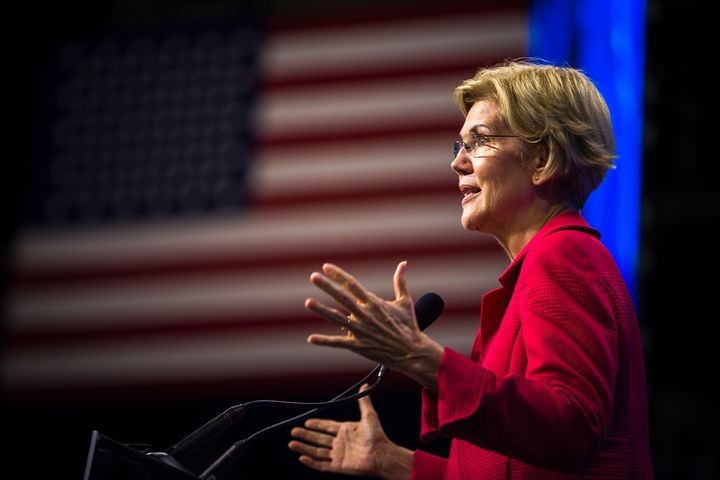 Warren’s reform plan would also switch the program to a more generous cost-of-living adjustment (COLA) formula to account for seniors’ health care costs, resulting in higher year-over-year benefit growth. The additional $200 a month that beneficiaries would receive would become part of a base benefit subject to the new COLA formula, which is designed to insulate benefits from the effects of inflation.

And in addition to the proposed across-the-board benefits, Warren calls for targeted benefit increases that aim to shore up some of the most vulnerable populations.

Many of the provisions have been in other recent progressive Social Security reform proposals. She would, for example, establish a special minimum benefit of 125% of the federal poverty level; allow caregivers of young children, seniors or people with disabilities to count caregiving work toward their earnings; reinstate and expand on the defunct “student benefit” enabling the children of a deceased worker to receive cash payments through the age of 24 if they pursue a higher education; and eliminate an obscure penalty on select state and local government employees who received some pension benefits in lieu of Social Security.

Warren’s plan to finance the higher Social Security benefits ― and patch up the program’s funding gap in the process ― also builds on elements already in circulation. Unlike some other progressive reform plans, though, she maintains present tax rates for workers earning $250,000 a year or less.

Currently, American workers contribute payroll taxes into Social Security on the first $132,900 that they earn each year, leaving the incomes of higher earners untouched. Warren would create a new payroll tax bracket on earnings over $250,000, including investment income not currently taxed for Social Security. Her plan would subject that income to a 7.4% tax on the employee and the employer both (14.8% total) while maintaining the 6.2% rate on income below the current taxable maximum.

But what distinguishes Warren’s plan from other recent reform proposals, including Rep. John Larson’s Social Security 2100 Act and Sen. Bernie Sanders’ Social Security Expansion Act, is the simplicity and universality of its across-the-board increase. The additional flat dollar amount would make it less abstract than the more technical changes in other proposals, such as modifications to the benefit formula.

It’s the additional $200 a month above all that gives Warren license to claim that her plan offers “the biggest and most progressive increase in Social Security benefits in nearly half a century.” And, as with her plan to cancel most Americans’ student debt, Warren has created an online calculator for people to see how their Social Security benefits would change under her plan.

In the Medium post, Warren documented in detail the growing importance of Social Security as a source of retirement income in light of slow wage growth and the decline of defined-benefit pensions. Among workers approaching retirement ― ages 50 to 64 ― the average 401(k) balance is less than $15,000, Warren noted. As a result, Social Security provides 90% of the income for 1 in 4 senior households, and a majority of the income for at least half of those households.

Warren framed her decision to back a major expansion of Social Security benefits as part of a larger commitment to fighting for consumers and struggling families that dates back to her days as a bankruptcy law expert.

“I’ve dedicated most of my career to studying what’s happening to working families in America,” she wrote. “One thing is clear: it’s getting harder to save enough for a decent retirement.”

As with the cause of adopting a “Medicare for All,” single-payer health care system, Warren is typically less closely associated with grassroots efforts to defend and expand Social Security than Sanders, her closest ideological counterpart in the Democratic presidential primary field. Sanders led opposition to then-President Barack Obama’s efforts to reduce Social Security benefits as part of a “grand bargain” with Republicans prior to Warren’s arrival in the Senate.

But after Warren took office in 2013, she quickly became a pivotal figure in progressive efforts to reorient the Social Security debate from one centered on alarmism about the program’s finances to a discussion of the role it could play in addressing a growing retirement income crisis. In a speech on the Senate floor in November 2013, Warren made the case for expanding Social Security benefits, sparking criticism from Third Way that resulted in several members of Congress distancing themselves from the business-friendly think tank.

Many Social Security advocates regard the speech ― and the response it evoked ― as a key turning point in the public debate on Social Security. She subsequently sponsored a nonbinding budget amendment in March 2015 calling for “sustainable expansion” of Social Security benefits; all but two of the Senate Democrats present voted in favor.

Warren “is a powerful leader in the movement to expand Social Security,” said Nancy Altman, a co-founder of the nonprofit Social Security Works, which has been working with Warren on the issue since her first Senate campaign. “All Americans owe her a debt of gratitude for standing up for our Social Security system.”

The greatest political vulnerabilities of Warren’s plan are its failure to fully close Social Security’s long-term funding gap and its expansion of benefits for all workers, not just those with the greatest needs. Larson’s bill, for example, would extend Social Security’s solvency for the entirety of the 75-year outlook that the program’s actuaries examine.

But Warren is not the first progressive Social Security advocate to chafe under the program’s 75-year outlook. Aside from Medicare Part A, Hospital Insurance, there are few if any major government programs required to plan so far into the future.

And when it comes to the effect of her proposed reforms on the neediest in the population, Warren can point to ample evidence that her plan is weighted toward those with the least. Benefits would increase for workers in the bottom half of the earnings scale by 25% on average, while the top 10th of workers would see their benefits increase by less than 5%, according to the analysis conducted by Zandi of Moody’s Analytics.