Donald Trump is no stranger to comically stupid scandals.

He was impeached for an open attempt to illegally leverage congressionally approved military aid so a newly elected Ukrainian president would investigate rival Joe Biden and announce it on television. “Stupid Watergate,” HBO’s John Oliver called it.

It’s no surprise, then, that Trump’s blatant and racist effort to steal an election he lost by 82 electoral votes and 5.8 million popular votes and counting is also really, really stupid.

First, Trump telegraphed the entire scheme to steal the election ahead of time, like a Bond villain explaining his entire plot, thus exposing the true purpose of his ensuing frivolous lawsuits. If it looked like he would lose, he planned to claim that late-counted absentee ballots were fraudulent and illegal and to file lawsuits to stop the certification of results in states where he trailed. The hope then was that Republican-controlled legislatures or governors would just hand him their state’s electoral votes. Whether or not this was legal didn’t seem to matter.

Those lawsuits claiming election and voter fraud have almost all been laughed out of court in embarrassing fashion after Trump’s own lawyers admitted they had no evidence of said fraud. Republican state lawmakers all said they wouldn’t be switching electoral votes to Trump. Law firms then dropped Trump as pressure mounted for them not to help him undermine democracy, which left former New York City Mayor Rudy Giuliani to step in as counsel.

Giuliani delivered a performance worthy of the bumbling Simpsons lawyer Lionel Hutz in which he lied about his standing with the District of Columbia Bar, rambled about the long-dead Chicago Mayor Richard Daley, demonstrated an incapacity to understand basic legal practices and could not properly define the word “opacity.”

“I’m not sure what ‘opacity’ means,” Giuliani said. “It probably means you can see.”

It’s easy to laugh at a former mayor who was recently caught with his hand down his pants in a “Borat” movie be-clowning himself in court.

But just because this is all incredibly dumb and has no chance of successfully overturning Biden’s win doesn’t mean it’s not incredibly dangerous. The entire scheme involves the delegitimization and disenfranchisement of voters in predominantly Black municipalities.

It undermines his supporters’ faith in democracy. And it could be used in years to come to justify unnecessary and damaging voting restrictions that would disproportionately affect Black voters. 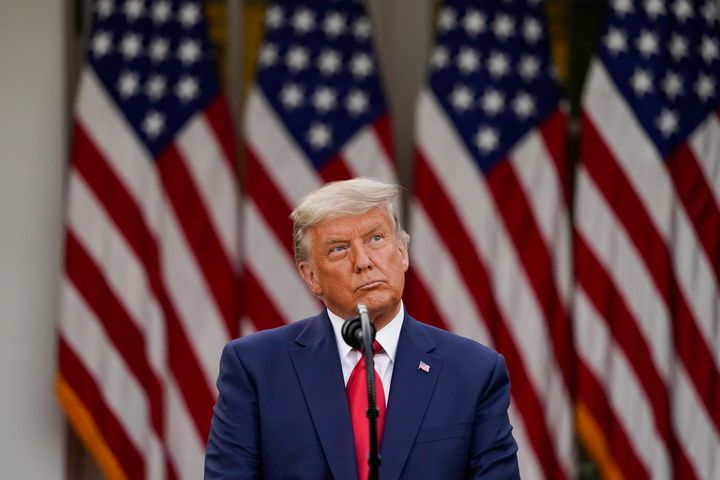 Political partisans often feel like elections were stolen from them. Shock and disbelief are, after all, the first stage of grief. But never before has a president of the United States led the charge in creating that false impression. Nor has any prior president refused to abide by the peaceful transfer of power inaugurated first by President George Washington’s decision not to run for a third term and President John Adams’ peaceful transfer to Thomas Jefferson after the two ran against each other in 1800.

Trump has turned this 200-year-plus tradition, the bedrock of American democracy, on its head through a disinformation campaign designed to maintain his power within the Republican Party and its aligned media system.

Like everything else Trump has done as president, his entire scheme to steal the election is not meant to succeed in reality — reality, in this case, being judged by actual courts and judges. It is, rather, intended to succeed on television or social media by making his supporters believe that Trump lost due to fraud and not think of him as a loser.

So far, it is working. The majority of Republicans state a belief that the election was rigged against Trump. (It wasn’t.) And nearly every Republican Party politician has either backed Trump’s false allegations of mass voter fraud or refused to accept that Biden won and is now president-elect.

The reason why is because of the nature of the Republican Party, which is actually just a hollowed-out shell filled by the ever-mutating conservative movement.

The conservative movement, born out of the 1964 Barry Goldwater presidential campaign and brought to power by Ronald Reagan in 1980, is openly antagonistic to Republican Party regulars and opposes any evidence of cooperation or appeasement with the enemy: Democrats.

To appease the movement, Republican politicians must pay strict attention to the far-right fringe of their party in order to stave off the looming threat of primary challenges. Once Trump conquered the party in 2016, Republicans seeking to avoid right-wing primary challenges had to adapt to his neo-personalist style of rule. This meant supplementing support for extremist right-wing policies and rhetoric with obsequious fealty to Trump and his family members. (With the only exception being when Trump suggests using the government to distribute wealth in an equitable manner.)

In 2020, this means echoing Trump’s false claims of fraud as he tries to steal the election ― or at the very least not rejecting them as the dangerous absurdity they are. Republicans now face a litmus test of endorsing a belief that the 2020 election was unfair, a position that undermines the necessary peaceful transfer of power that American democracy would not exist without. 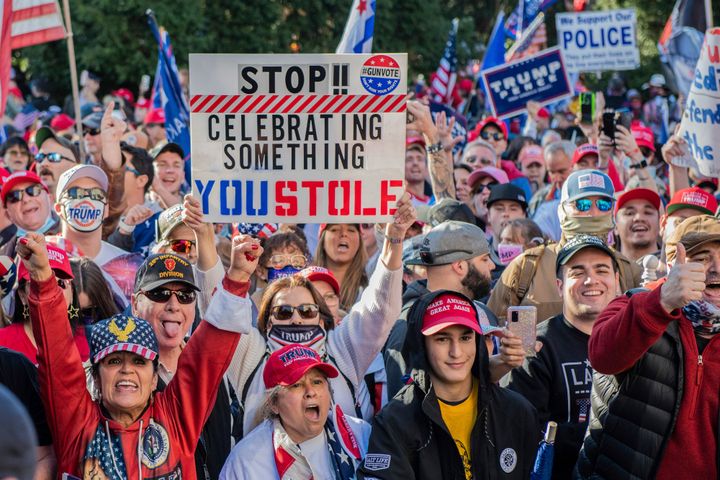 This has trickled down to even the most local level of politics. On Tuesday, two Republican Party members of the Wayne County Board of Canvassers in Michigan initially voted against certifying the county’s election results. They were just following the president’s openly stated scheme to prevent the certification of election results in states he lost and to somehow get Republican state legislators to ignore the state’s popular vote and hand him its electoral college votes.

Initially, Republican board member Monica Palmer said she would have been happy to certify the vote from Wayne County’s predominantly white suburbs, but not from nearly 80% Black Detroit. But after nearly three hours of angry calls from the public lambasting the racist effort to disenfranchise Detroit citizens, she and the other Republican board member reversed themselves and voted to certify the results.

But not before Trump could tweet that they were heroes for trying to throw out votes cast by Black voters.

In Pennsylvania, Trump sued (and lost) to stop the certification of votes in Philadelphia, which is over 40% Black. In Wisconsin, he has filed for a partial recount in Milwaukee and Dane counties, where he alleges fraud without evidence. These two Wisconsin counties contain 74% of the state’s Black population. In Georgia, Sen. Lindsey Graham (R-S.C.) reportedly asked Republican Secretary of State Brad Raffensperger if he could find a way to throw out all absentee ballots in counties with high rates of signature mismatch. (Graham denies this.) Studies show that Black voters are disproportionately punished for signature mismatches.

These efforts will all fail. But they augur a terrible turn to the past in the long-standing effort to limit Black voter participation in elections. It harkens back to the long history of racist disenfranchisement perpetrated by the white majority on Black Americans.

Republicans, taking Trump’s lead, today call to “count every legal vote.” In the past, the phrase “legal votes” came up most frequently in relation to two particular episodes, according to the Philadelphia Inquirer: the initial disenfranchisement of Black men outside of the South beginning in 1810, and the Compromise of 1877 that ended post-Civil War Reconstruction and set the South on the path to Jim Crow.

This could all be laughed off as the absurd theater that it no doubt is, but this narrative is taking root within the Republican Party and will likely structure American politics in the years to come. And that’s not funny.