The Department of Homeland Security (DHS) this week will begin reuniting a handful of families who were separated under the Trump administration’s “zero-tolerance” policy on illegal immigration.

President Biden’s administration said Monday that its reunification task force will bring together its first four families that were separated by the policy, which resulted in thousands of migrant parents being separated from their children.

“The Family Reunification Task Force has been working day and night to address the prior administration’s cruel separation of children from their parents. I’m proud to announce we will begin to reunite the first of those families,” Homeland Security Secretary Alejandro Mayorkas said Monday.

“Today is just the beginning. We are reuniting the first group of families, many more will follow, and we recognize the importance of providing these families with the stability and resources they need to heal,” he added.

The “zero-tolerance” policy was only in effect for a handful of months in 2018 before it was enjoined by a federal court. And by late 2018, according to a 2019 report by the Department of Health and Human Services (HHS) Inspector General, over 2,100 families had been reunited under the Trump administration.

But more than 5,000 families in total were separated, according to court filings. And the executive director of Biden’s reunification task force, Michelle Brane, says the administration believes more than 1,000 families remain separated.

That means the efforts by the task force so far have made just a small dent in the total number of families that remain separated. But the task force is still early in its work, with its initial report not due until June 2.

The news comes as the Biden administration is still dealing with a massive influx of migrants on the southern border, which has led to unaccompanied children in many cases being placed into crowded processing facilities. 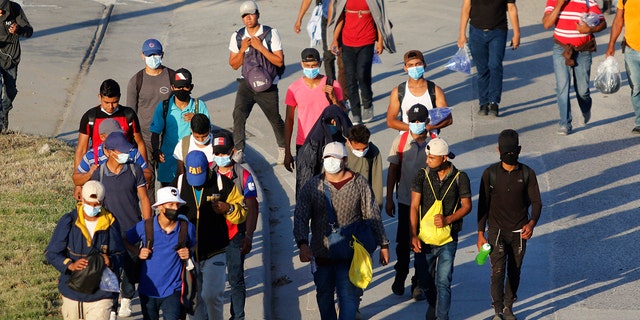 Migrants who aim to reach the U.S. walk along a highway as they leave San Pedro Sula, Honduras, early Tuesday, March 30, 2021. As the Biden administration deals with a new surge of migrants, a task force it set up has begun reuniting some migrant families that were separated under a previous Trump administration policy. (AP Photo/Delmer Martinez)
((AP Photo/Delmer Martinez))

Republicans blame Biden and his campaign rhetoric for creating incentives for migrants to come to the U.S., thus overwhelming facilities on the southern border. Biden and his administration say that former President Donald Trump left federal departments, including the DHS, which is responsible for the border, “hollowed out,” making it impossible for the new administration to handle the emergency.

Other agencies involved in the reunification task force include the State Department, Justice Department, and the Department of Health and Human Services, according to DHS.

“The first families reuniting this week are mothers. They are sons. They are daughters. They are children who were 3 years old at the time of separation. They are teenagers who have had to live without their parent during their most formative years,” Mayorkas also said Monday.

He added: “We are pleased that the process of reunifications is beginning this week and that these four mothers will be hugging their children after so many years.”