Democrats say climate change caused wildfire explosion in the West. Did it? 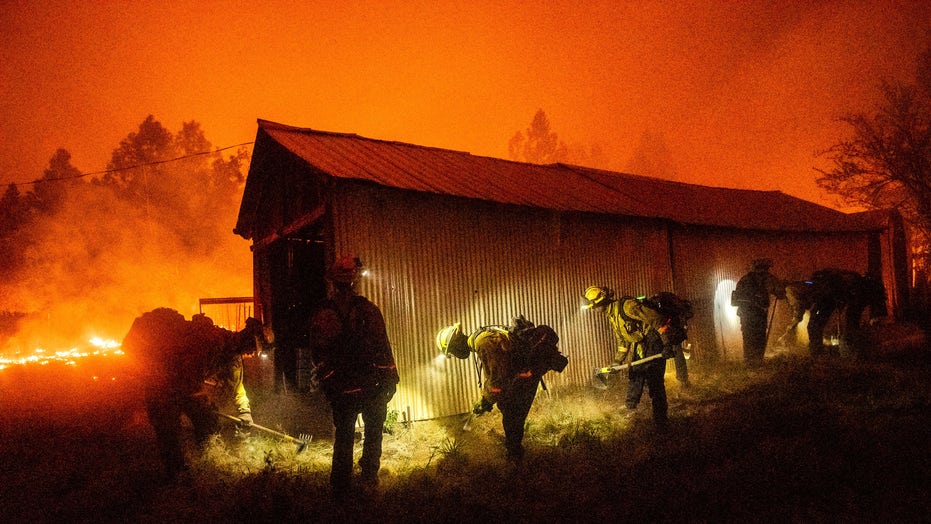 California, in the middle of a 20-year drought, is battling more than two dozen wildfires, including three of its five largest ever.

Cal Fire, the state’s fire agency, reported Thursday that firefighters were battling 28 major fires across the state and more than 3.1 million acres have burned this year.

The sky on much of the West Coast has been painted an eerie burnt orange, and flames have left entire towns in dust.

“Mother earth is angry, she is telling us. Whether she’s telling us with hurricanes in the Gulf Coast, fires in the West, whatever it is, the climate crisis is real,” House Speaker Nancy Pelosi said this week on MSNBC.

“If anyone needed any proof of how disastrously and quickly climate change is affecting our globe, look out West,” Sen. Minority Leader Chuck Schumer told reporters this week.

“The data is self-evident, the experience that we have in the state of California just underscoring the reality of the ravages of climate change,” California Gov. Gavin Newsom said.

He used the fires to push for a more aggressive climate change goal, calling the state’s already-ambitious goal of using 100% clean energy by 2045 “inadequate.”

California Republican state Sen. Jim Nielsen and Assemblyman James Gallagher countered that the cause of recent devastating wildfires and blackouts “is decades of bad policy enacted by Democrats, not climate change.”

“The excuse of climate change cannot be used to deflect from the fundamental failure to address the fuels build-up in our forests that are the cause of these devastating fires,” they said in a statement. “These same misguided policy decisions have led to rolling blackouts and an energy grid that is falling apart.”

Others lay blame at those who sparked the fire – arsonists in Oregon or a gender reveal party gone wrong in California.

Logging practices set the scene for today’s fires, according to Greg Giusti, forests and wildland ecology expert with the University of California Agriculture and Natural Resources. 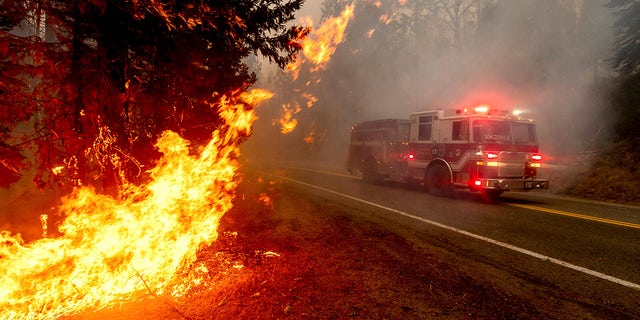 In this Sept. 7, file photo a firetruck drives along state Highway 168 while battling the Creek Fire in the Shaver Lake community of Fresno County, Calif.

“A lot of it has to do with 20th-century logging practices that converted relatively resistant old-growth forests to something else – forests that have a lot more trees per acre and a lot more understory brush and flammable fuels,” Giusti told Fox News in an interview.

He said the cause of the spark, typically humans, is “really irrelevant.” “When conditions are right any little spark can start a conflagration.”

Harmful logging practices after World War II were followed by a population explosion in the Golden State. “People like their trees, they like to grow their trees, and they don't like to cut trees, which increases the level of burnable material,” Giusti said.

And while fires are destructive to human property, much of the plant life cycle depends on a burn. A century-long policy of complete and total fire suppression may be boiling over the surface.

“Many seeds won't germinate unless exposed to the heat of fire,” Giusti said. “From a human standpoint we look at fires as destructive. But from a plant’s perspective, fire is often an act of rejuvenation. Whole plant communities are waiting to be burned.”

Giusti added that while fires threatening human population need to be quelled, some of the flames ripping through national forest land are doing what they've always done.

But climate change has exacerbated blazes' intensity, Giusti added. Fewer foggy days on the California coast and a shorter rainy season have left the ground ideal for flames.

While Congress pays much lip service to climate change, it is slow to help maintain public lands, which make up nearly half of California’s space, and are owned mostly by the federal government. 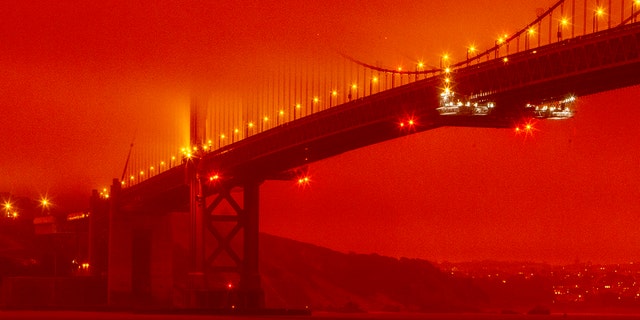 In this photo provided by Frederic Larson, the Golden Gate Bridge is seen at 11 a.m. PT, Sept. 9, in San Francisco, amid a smoky, orange hue caused by the ongoing wildfires. (Frederic Larson via AP)

Timber harvests have in the past been treated as a money-making operations, but the trees that need to be cleared are not lucrative on the commercial market.

Giusti also noted that firefighting is a “huge jobs program” on the West Coast.

“Cal Fire is arguably the best firefighting force in the world. The men and women there put lives on the line every day,” Giusti said. “But firefighting in the West is a huge jobs program. California spends a half billion per year fighting fire.”

He called for a paradigm shift, where resources spent on fighting fires would be reallocated to preventing fires. “It’s going to be a rough pill for some people to swallow, I appreciate that,” he said. “But areas will keep being ready to burn again if you just let nature take its course.”