The Democrat spent part of his news conference peddling New York State-branded hand sanitizer, boosting he invented the floral-scented product and joking with female reporters that the government germ-killer is better than anything on the commercial market.

“How remarkable was this product,” Cuomo gushed with one local reporter in New York who had admitted she’s tried the sanitizer. “Maybe I didn’t invent Google, but I did invent New York State Clean hand sanitizer.”

The reporter laughed and agreed with the governor.

“Put that in my eulogy,” Cuomo quipped. 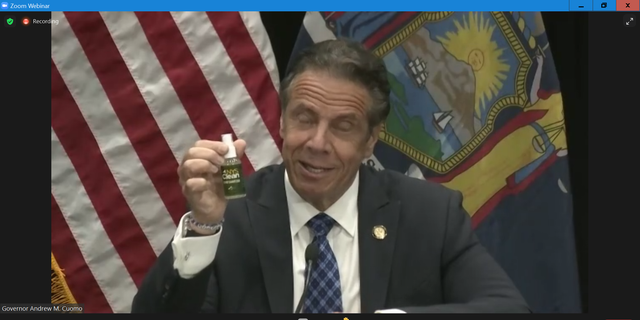 The hand-picked questions came from local reporters who asked about access to the new broadband program and coronavirus restrictions. Cuomo used the opportunity with seemingly non-hostile media to press two female reporters on whether they have NYS Clean hand sanitizer, as he held up his bottle for the camera.

When one reporter said she already had plenty of other sanitizers, Cuomo insisted she needed his version because it’s much “better.” He then went on to tick off three reasons why.

“Second, my hand sanitizer has a special scent that also clears the sinus passages, so you’re not only sanitizing your hands you’re also clearing your sinus passages at the same time,” Cuomo continued with the light-hearted banter. “Third, mine is free.” 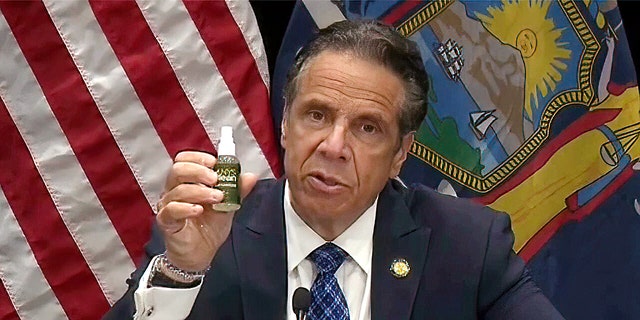 The reporter went on to ask Cuomo about the broadband program and gun violence in New York, but the governor, who has seemed convinced he can ride out his scandals, then found a way to pivot back to his favorite prop.

“I’m going to bring you the purse size New York State Clean [santizer],” Cuomo told the reporter. “… I want you to have this.”

Cuomo announced the creation of the hand sanitizer last March at the start of the coronavirus pandemic that would be made by New York prison inmates who reportedly work for less than 65 cents an hour.

The germ-killer production line started as a way to fight price gouging and sanitizer supply issues. The inmate-produced “NYS Clean Hand Sanitizer” was to be free to New York residents and issued to state and local government agencies and prisons.

It has a “floral bouquet,” Cuomo boasted at the time.