Fox News senior meteorologist Janice Dean, who lost her in-laws living in assisted living facilities to COVID-19, says while New York Gov. Andrew Cuomo ‘accepts his award, many of us just accepted caskets and urns of our loved ones.’

New York Gov. Andrew Cuomo received the Founders Award "in recognition of his leadership during the Covid-19 pandemic and his masterful use of television to inform and calm people around the world" at Monday's International Emmy Awards ceremony.

Cuomo was announced as an award recipient Friday, sparking significant backlash because of his controversial nursing home policy that has been linked to the deaths of thousands of elderly residents.

GOV. ANDREW CUOMO TO RECEIVE EMMY AWARD FOR HIS 'LEADERSHIP' DURING THE PANDEMIC, TWITTER GOES NUTS

"Andrew Cuomo deserves to be on trial for the elderly people his nursing home order directly murdered. Instead, he's getting an Emmy," The Federalist's Ben Domenech wrote on Twitter.

According to the Emmys, its Founder's Award is given to those who "cross cultural boundaries to touch our common humanity." Past recipients include former Vice President Al Gore, Oprah Winfrey, and Steven Spielberg. 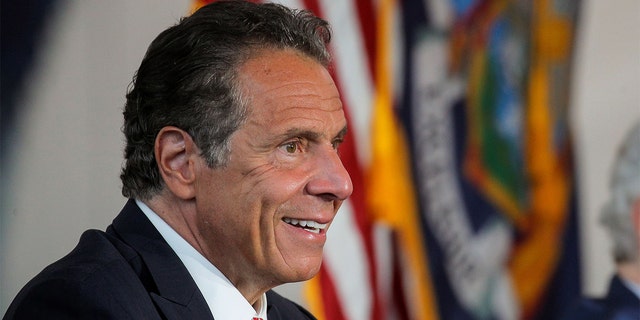 In the early weeks of the pandemic, Cuomo was hailed by Democrats and members of the media for his daily briefings tackling the coronavirus. However, the governor has since been scrutinized for his order that required nursing homes in his state to admit COVID-19 patients. While that order has since been reversed, the policy has been heavily attributed to New York's record-breaking death toll, which includes many senior citizens living in nursing homes.

Cuomo, as well as New York City Mayor Bill de Blasio, have also been slammed for their crackdown of Orthodox Jews and recent closure of NYC schools.