Members of Congregation Shomrei Emunah, a small Orthodox Jewish synagogue in northern New Jersey, are preparing for a Passover that will be different from any other in recent memory.

There’s no minyan, the quorum of 10 men needed for communal prayer, so congregants won’t be able to hear special scriptures recited for Passover, the synagogue’s Rabbi Menachem Genack told HuffPost. Instead of meeting Genack in person to sell their chametz, the leavened foods prohibited during Passover, congregants will have to fill out forms online. Plus, the community’s keilim mikva, a small pool used to purify dishes and utensils for use in a kosher kitchen, is closed ― which complicates preparations for a holiday where food is a focal point.

But the biggest difference will be the empty seats around the table when Passover begins on April 8. Genack said was he planning to celebrate with his elderly mother-in-law, his children and their families. The rabbi was looking forward to hearing his grandchildren ask the four questions, a part of the feast that is always assigned to the youngest guests.

Those plans have been scrapped because of COVID-19, the fast-spreading illness caused by a novel strain of coronavirus. Not having family around during the holiday is going to be a tough change ― but a mandatory one, Genack said, given the seriousness of the disease.

“That’s something we’re just going to have to adjust to,” he said. “The impact is quite profound, but quite necessary.” 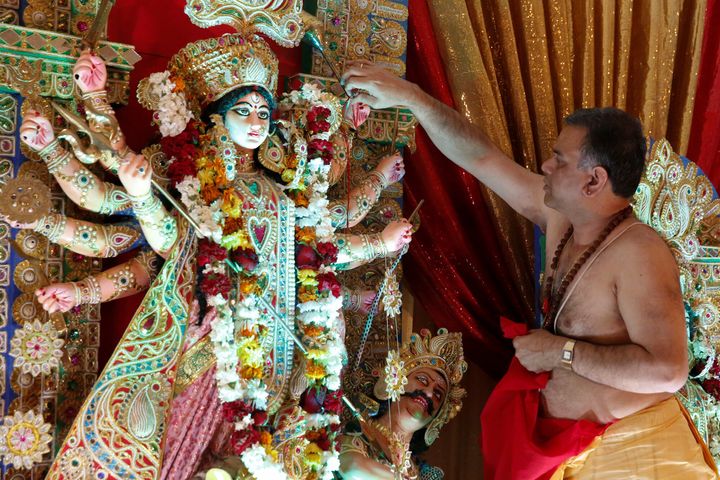 As Americans enter another month of fighting COVID-19, the country’s major religious groups are heading into one of the holiest seasons on their calendars. Nearly ever major American religious group has a holiday in April. Christians, Jews and Muslims, will observe Easter, Passover and Ramadan. Hindus honor the birth of the Lord Rama on Rama Navami this month. Buddhists who belong to the Jodo Shinshu tradition are preparing for Hanamatsuri, which celebrates the birth of the Buddha. Sikhs will commemorate Vaisakhi in recognition of the moment Sikhism was born as a collective faith. And at the end of April, Bahá’ís will celebrate Ridvan, to honor when their faith’s founder declared himself to be a manifestation of God.

In normal circumstances, these holidays would be occasions for large gatherings ― parades, concerts, packed houses of worship, living rooms full of visiting extended family and friends. But this year, the parades are canceled, pews will lie empty, and many people of faith are counting on watching livestreamed services while staying at home.

Many Hindus opened this month by celebrating Chaitra Navaratri, a nine-night festival devoted to the divine feminine that began on March 25 this year. The festival is particularly popular among Hindu Americans who trace their ancestry to north and northeastern India, where the goddess Durga is a treasured form of the divine, according to Anantanand Rambachan, a scholar of Hinduism at Minnesota’s St. Olaf College. During Chaitra Navaratri, devotees fast, perform nightly worship, and recite sacred texts about the goddess.

The final night, which fell on April 2, is set aside as Rama Navami, the birth of the Lord Rama. On this day, devotees rock icons of Rama as a baby in cradles with lullabies and listen to a recital of the story of his birth from the ancient Sanskrit epic, the Ramayana. The birth of Rama’s most famous servant, Hanuman, will be celebrated on April 8.

These rituals are usually performed in Hindu temples and homes ― but they’ve been affected by limitations on social gatherings caused by the virus, Rambachan said. His own temple in Maple Grove, Minnesota, livestreamed rituals performed by priests.

“Clearly, while there are limits, such as not being able to receive the sacred flames (arati), sip the water used in worship (charanamrit), receive food offerings made to God (prasada), and join in congregational singing (bhajan), Hindus are utilizing technology to adapt worship in a pandemic,” Rambachan told HuffPost in an email. 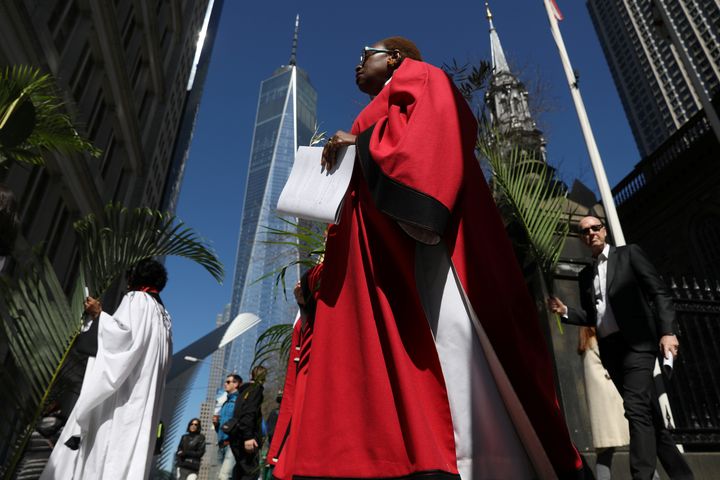 Holy Week, which commemorates the events leading up to Jesus’ resurrection on Easter, is a particularly sacred time for Roman Catholics, Episcopalians, Methodists, and members of other Christian denominations. Holy Week begins with Palm Sunday on April 5 this year, but many of the beloved traditions that make this period special won’t be possible. Churches won’t be holding Palm Sunday processions. Priests can’t perform the rite of foot washing for parishioners, in imitation of what Jesus did for his disciples on Holy Thursday. There will be no candlelit, communal Easter vigil services and no festive Easter brunches with family.

Instead, most churches will be livestreaming their services. In Seattle, the Rev. Steven Thomason, dean of Saint Mark’s Episcopal Cathedral, advised parishioners to look for ways to replicate some Holy Week rituals at home. In a YouTube video, he advised members to assemble home altars, find branches in their yards to use in place of palms, and to wash each other’s feet at home in basins. For those living alone, the washing of one’s own hands during this time is also a powerful gesture, he said.

“In this time of a pandemic, when we wash our hands, we’re actually serving others by caring for them and wanting to keep them healthy,” Thomason said. “And that, of course, is what Maundy [Holy] Thursday is about, the call into our servanthood, one with another.”

Passover begins on April 8 this year. The highlight of the holiday is the seder, a ritual-packed feast that dramatically retells the emancipation of the Israelites from slavery in ancient Egypt.

America’s largest Jewish denomination, the Reform movement, has put together a set of online resources for those who are celebrating Passover in quarantine, along with tips for how to host or attend virtual seders.

This year’s holiday will be particularly tough on elderly Jewish Americans, who are left to clean their houses of chametz and assemble what’s needed for the Passover table all by themselves. In addition, more traditionally observant Jewish Americans forgo electricity during the seder, which means they can’t join family members online. 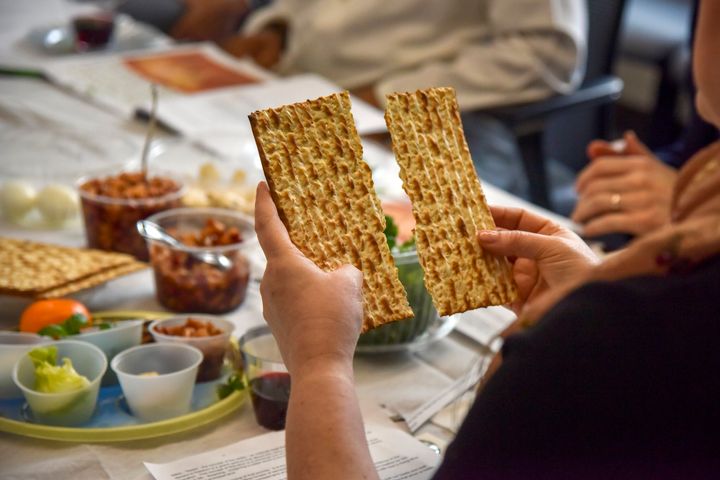 In Miami-Dade County, which has a significant number of Holocaust survivors, the Jewish Community Services of South Florida has teamed up with a local caterer to deliver 500 seder boxes to homebound community members. The boxes contain all the essentials for a Passover meal, including fresh-cooked food, wine and a Passover Haggadah (the text recited at the seder), according to Jacob Solomon, president of the Greater Miami Jewish Federation, which oversees JCS.

Solomon said he’s been inspired by how his community is coming together to make sure everyone’s spiritual and physical needs are met.

“It’s a confusing and frightening time as far as the reality of every day, but the values that we abide by and the traditions we abide by are still really important and they challenge us to be creative and energetic,” Solomon said. 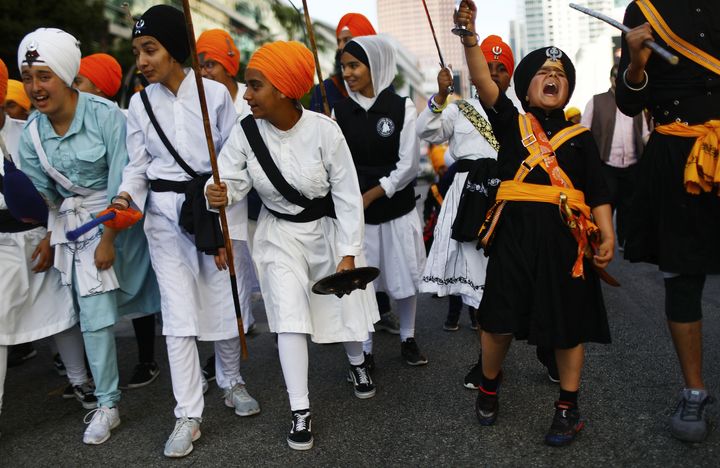 One of the Sikh’s community’s most significant annual gatherings, Vaisakhi, falls in mid-April. Vaisakhi honors the day in 1699 when Guru Gobind Singh, the 10th Sikh guru, established the Khalsa, the community of baptized Sikhs. Sikhs mark the date by gathering at houses of worship, or gurdwaras, for religious services. Many communities will also hold large processions involving the singing of hymns.

Satjeet Kaur, executive director of the advocacy group Sikh Coalition, said that many Sikh American communities were holding on to the hope that social distancing guidelines would be lifted by the time Vaisakhi arrived. But it’s clear that’s no longer possible, she said.

“We have seen cancellations or postponing of major events in accordance with local city and state recommendations, and we expect to see more, given that the community is working hard to take serious precautions against COVID-19,” Kaur told HuffPost. “Sikhs will instead participate in prayer and reflection at home as well as online spaces created to bring communities together.” 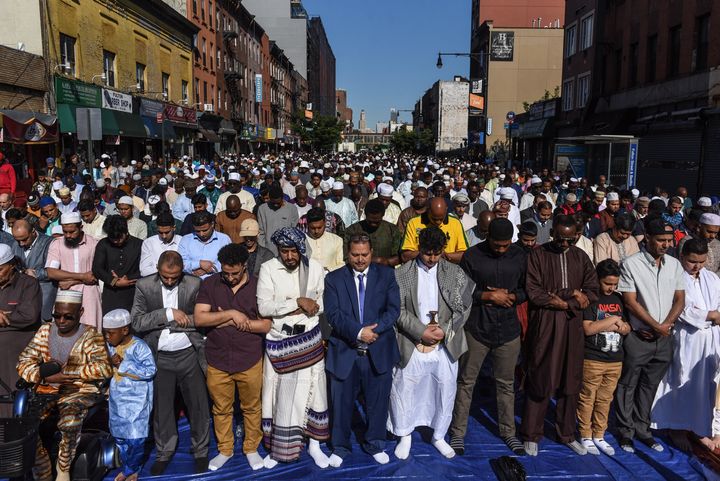 For Muslims, the holy month of Ramadan is expected to begin on April 23. Ramadan commemorates the revelation of the Quran to the Prophet Muhammad. Along with fasting during daylight hours, many observe the month by studying the Quran, increasing their charitable giving and attending daily services at their mosques.

During the last 10 days of Ramadan, some Muslims decide to participate in an intensive spiritual retreat known as itikaf, in which they spend several days in the mosque worshiping, praying and studying. That won’t be possible this year.

It’s also common to visit the houses of extended family members and friends for iftar, an evening meal that breaks the daily fast.

Losing the social elements of Ramadan is going to be the toughest adjustment this year, according to Hossam AlJabri, a board member and lay imam for the Muslim American Society of Boston.

He’s encouraging members of his community to concentrate on the positive. An unexpected plus of social distancing and quarantine will be the opportunity to strengthen the bonds within one’s immediate family and focus on one’s own spirituality, he said.