WASHINGTON (Reuters) – Confusion, missing mail-in ballots and long lines at some polling centers marred primary elections on Tuesday in eight states and the District of Columbia, the biggest test yet of voting during the coronavirus outbreak. 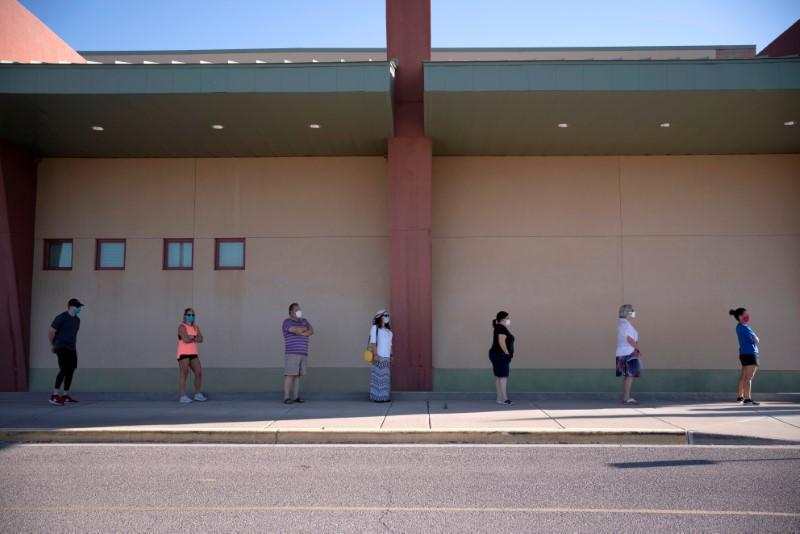 The most extensive balloting since the pandemic sparked lockdowns in mid-March served as a dry run for the Nov. 3 general election. It offered a glimpse of the challenges ahead on a national scale if that vote is conducted under a lingering threat from COVID-19.

All of the states voting on Tuesday encouraged or expanded mail-in balloting as a safe alternative during the outbreak, and most sharply reduced the number of in-person polling places as officials struggled to recruit workers to run them.

That led to record numbers of mail-in ballots requested and cast in many states, along with an explosion of complaints about delayed ballots and questions about where to vote after polling places were consolidated.

Polling places in at least four Pennsylvania counties opened late, and voting machines failed in at least three of the state’s counties, including Philadelphia, according to the Pennsylvania Election Protection Coalition voting rights group.

While most in-person voting locations featured extensive safety protocols – including masks, sanitizer and social distancing for lines – there were lapses.

“It is a mess in there. People confused. No social distancing, it is packed with machines, tables and people,” Rich Garella, of the voting rights group Protect Our Vote Philly, said of one south Philadelphia location.

The voting in some areas also was complicated by massive protests after an African-American man died in police custody in Minnesota last week. Philadelphia Mayor Jim Kenney said a city curfew would not be enforced until 30 minutes after polls close. In Washington, voters and poll workers will be exempt from that city’s curfew, Mayor Muriel Bowser said.

Robert Wood, 54, said he considered not going to the polls given the dual threat of the coronavirus and riots. But the South Philadelphia resident said he thought last week’s events made it even more important.

“As a black man, I know a lot of people lost their lives so that I can vote. I take that seriously,” Wood said.

Counting the flood of mail-in ballots could delay the results, officials said. In Pennsylvania, Governor Tom Wolf extended the deadline for receiving mailed ballots postmarked by June 2 to June 9 in six counties, including Philadelphia.

Pennsylvania and three of the other states voting – Indiana, Maryland and Rhode Island – had delayed their nominating contests from earlier in the year to avoid the worst of the coronavirus outbreak that has killed more than 105,000 people in the United States. Iowa, Montana, New Mexico, South Dakota and the District of Columbia also were voting on Tuesday.

The primaries come amid a partisan brawl over voting by mail, which Democrats support as a safe way to cast a ballot and Republican President Donald Trump condemns as ripe for fraud. Numerous studies have found little evidence of voting fraud tied to mail-in ballots.

Former Vice President Joe Biden has essentially wrapped up the Democratic presidential nomination to face Trump in November, but seven of the states also will have primaries for state and congressional offices.

Among the top races contested on Tuesday is a Republican congressional primary in Iowa. U.S. Representative Steve King, who has a long history of making racially charged remarks, faces a stiff re-election challenge after being largely abandoned by party leadership.

Harris goes after Biden on race in U.S. presidential debate