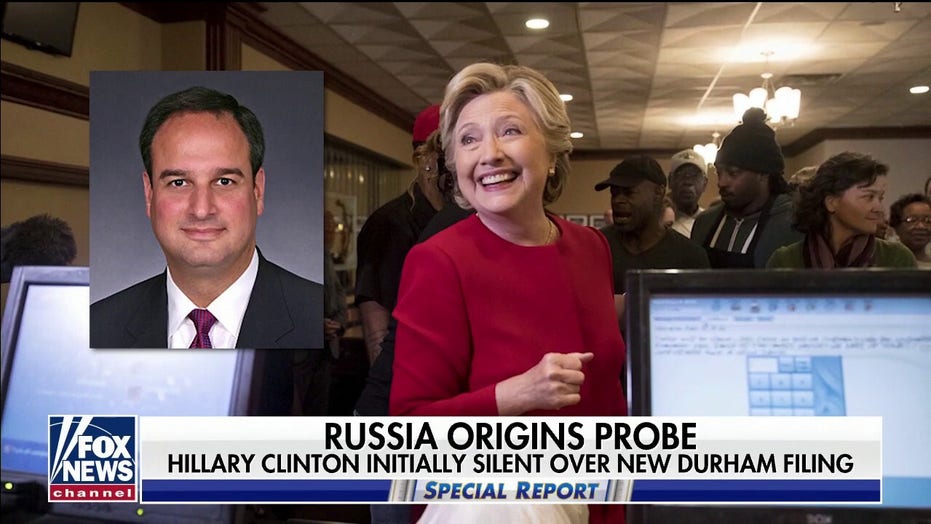 Fox News correspondent David Spunt has the latest on allegations against Michael Sussmann on ‘Special Report.’

Attorneys for Clinton campaign lawyer Michael Sussmann filed a motion Thursday to dismiss the case against him in Special Counsel John Durham’s investigation, claiming a case of “extraordinary prosecutorial overreach.”

“Defendant Michael A. Sussmann, by and through undersigned counsel and pursuant to Federal Rule of Criminal Procedure 12(b)(3)(B), respectfully moves this Court to dismiss the Indictment because the single count therein “fail[s] to state an offense,’” the filing reads.

Sussmann has been charged as part of Durham’s investigation with making a false statement to a federal agent. Sussmann has pleaded not guilty.

Durham’s indictment against Sussmann, says he told then-FBI General Counsel James Baker in September 2016, less than two months before the 2016 presidential election, that he was not doing work “for any client” when he requested and held a meeting in which he presented “purported data and ‘white papers’ that allegedly demonstrated a covert communications channel” between the Trump Organization and Alfa Bank, which has ties to the Kremlin.

But in the motion to dismiss Thursday, Sussmann’s legal team called the case one of “extraordinary prosecutorial overreach.”

“Accordingly, where individuals have been prosecuted for providing tips to government investigators, they have historically been charged with making a false statement only where the tip itself was alleged to be false, because that is the only statement that could affect the specific decision to commence an investigation,” the lawyers wrote. “Indeed, the defense is aware of no case in which an individual has provided a tip to the government and has been charged with making any false statement other than providing a false tip. But that is exactly what has happened here.”

The lawyers argued that Sussmann “voluntarily” met with the FBI in the fall of 2016 to “pass along information that raised national security concerns.”

“He met with the FBI, in other words, to provide a tip,” Sussmann’s lawyers wrote. “There is no allegation in the indictment that the tip he provided was false. And there is no allegation that he believed the tip he provided was false. Rather, Mr. Sussmann has been charged with making a false statement about an entirely ancillary matter—about who his client may have been when he met with the FBI—which is a fact that even the Special Counsel’s own Indictment fails to allege had any effect on the FBI’s decision to open an investigation.”

“Mr. Sussmann did not make any false statement to the FBI,” the lawyers wrote.

“Allowing this case to go forward would risk criminalizing ordinary conduct, raise First Amendment concerns, dissuade honest citizens from coming forward with tips, and chill the advocacy of lawyers who interact with the government,” his lawyers argued.

“The Special Counsel’s unprecedented and unlawful overreach should not be countenanced, and the single count against Mr. Sussmann should be dismissed…,” they added.

Sussmann’s legal team’s request for dismissal of the case comes after Durham, on Feb. 11, filed a motion focused on potential conflicts of interest related to the representation of Sussmann.

Included in the “factual background” section of Durham’s filing alleged Sussmann, and a “Tech Executive-1,” now identified as Rodney Joffe, and his associates, “exploited” internet traffic pertaining to a “particular healthcare provider,” Trump Tower, Trump’s Central Park West apartment building, and the Executive Office of the President of the United States in order to “establish ‘an inference’ and ‘narrative’” to then bring to federal government agencies tying Trump to Russia.

In the section titled “Factual Background,” reveals that Sussmann “had assembled and conveyed the allegations to the FBI on behalf of at least two specific clients, including a technology executive (Tech Executive 1) at a U.S.-based internet company (Internet Company 1) and the Clinton campaign.”

Durham’s Feb. 11 filing said Sussmann’s “billing records reflect” that he “repeatedly billed the Clinton Campaign for his work on the Russian Bank-1 allegations.”

Sussmann and his legal team, on Monday, though, demanded that the court “strike” the “factual background” section of Durham’s filing, arguing it will “taint the jury pool.”

“Unfortunately, the Special Counsel has done more than simply file a document identifying potential conflicts of interest,” Sussmann’s attorneys wrote. “Rather, the Special Counsel has again made a filing in this case that unnecessarily includes prejudicial—and false—allegations that are irrelevant to his Motion and to the charged offense, and are plainly intended to politicize this case, inflame media coverage, and taint the jury pool.”

Sussmann’s attorneys added: “Sadly, the Special Counsel seems to be succeeding in his effort to instigate unfair and prejudicial media coverage of Mr. Sussmann’s case.”

Sussmann’s legal team called for the court to “strike the Factual Background portion of the Special Counsel’s motion pursuant to the Court’s inherent power to ‘fashion an appropriate sanction for conduct which abuses the judicial process.’”

The “factual background” section of Durham’s filing alleged that Sussmann and the Tech Executive had met and communicated with another law partner, who was serving as General Counsel to the Clinton campaign. Sources told Fox News that lawyer is Marc Elias, who worked at the law firm Perkins Coie.

Durham’s filing alleged that in July 2016, the tech executive worked with Sussmann, a U.S. investigative firm retained by Law Firm 1 on behalf of the Clinton campaign, numerous cyber researchers and employees at multiple internet companies to “assemble the purported data and white papers.”

“In connection with these efforts, Tech Executive-1 exploited his access to non-public and/or proprietary Internet data,” the filing states. “Tech Executive-1 also enlisted the assistance of researchers at a U.S.-based university who were receiving and analyzing large amounts of Internet data in connection with a pending federal government cybersecurity research contract.”

“Tech Executive-1 tasked these researchers to mine Internet data to establish ‘an inference’ and ‘narrative’ tying then-candidate Trump to Russia,” Durham states. “In doing so, Tech Executive-1 indicated that he was seeking to please certain ‘VIPs,’ referring to individuals at Law Firm-1 and the Clinton campaign.”

Durham also wrote that during Sussmann’s trial, the government will establish that among the Internet data Tech Executive-1 and his associates exploited was domain name system (DNS) internet traffic pertaining to “(i) a particular healthcare provider, (ii) Trump Tower, (iii) Donald Trump’s Central Park West apartment building, and (iv) the Executive Office of the President of the United States (EOP).”

Durham also writes that during Sussmann’s trial, the government will establish that among the Internet data Tech Executive-1 and his associates exploited was domain name system (DNS) internet traffic pertaining to “(i) a particular healthcare provider, (ii) Trump Tower, (iii) Donald Trump’s Central Park West apartment building, and (iv) the Executive Office of the President of the United States (EOP).”

“Upon identifying DNS queries from Russian-made Yota phones in proximity to the Trump campaign and the EOP, respected cyber-security researchers were deeply concerned about the anomalies they found in the data and prepared a report of their findings, which was subsequently shared with the CIA,” Joffe’s spokesperson said.

In Sussmann’s meeting with the second U.S. government agency, Durham says he “provided data which he claimed reflected purportedly suspicious DNS lookups by these entities of internet protocol (IP) addresses affiliated with a Russian mobile phone provider,” and claimed that the lookups “demonstrated Trump and/or his associates were using supposedly rare, Russian-made wireless phones in the vicinity of the White House and other locations.”

“The Special Counsel’s Office has identified no support for these allegations,” Durham wrote, adding that the “lookups were far from rare in the United States.”

“For example, the more complete data that Tech Executive-1 and his associates gathered–but did not provide to Agency 2–reflected that between approximately 2014 and 2017, there were a total of more than 3 million lookups of Russian Phone-Prover 1 IP addresses that originated with U.S.-based IP addresses,” Durham wrote. “Fewer than 1,000 of these lookups originated with IP addresses affiliated with Trump Tower.”

Durham added that data collected by Tech Executive-1 also found that lookups began as early as 2014, during the Obama administration and years before Trump took office, which he said, is “another fact which the allegations omitted.”

“In his meeting with Agency-2 employees, the defendant also made a substantially similar false statement as he made to the FBI General Counsel,” Durham wrote. “In particular, the defendant asserted that he was not representing a particular client in conveying the above allegations.”

“In truth and in fact, the defendant was representing Tech Executive-1–a fact the defendant subsequently acknowledged under oath in December 2017 testimony before Congress, without identifying the client by name,” Durham wrote.

A spokesperson for the CIA did not immediately respond to Fox News’ request for comment.

At this point, Durham has indicted three people as part of his investigation: Sussmann in September 2021, Igor Danchenko on Nov. 4, 2021 and Kevin Clinesmith in August 2020.

Danchenko was charged with making a false statement and is accused of lying to the FBI about the source of information that he provided to Christopher Steele for the anti-Trump dossier.

Kevin Clinesmith was also charged with making a false statement. Clinesmith had been referred for potential prosecution by the Justice Department’s inspector general’s office, which conducted its own review of the Russia investigation.

Specifically, the inspector general accused Clinesmith, though not by name, of altering an email about Page to say that he was “not a source” for another government agency. Page has said he was a source for the CIA. The DOJ relied on that assertion as it submitted a third and final renewal application in 2017 to eavesdrop on Trump campaign aide Carter Page under the Foreign Intelligence Surveillance Act (FISA).