Home » Politics » California’s 2 Emergencies: How To Shelter People Fleeing Wildfires In A Pandemic

California’s 2 Emergencies: How To Shelter People Fleeing Wildfires In A Pandemic

This is Rachel Beer’s third time organizing a wildfire evacuation shelter. Part of her job as a parks and recreation worker in Sonoma County, California, is disaster preparedness and response. She helped organize and manage shelters during the Tubbs Fire in 2017 (at the time the state’s most destructive fire in history) and the similarly devastating Kincade Fire in 2019.

But now, as more than 560 fires blaze up and down the entire state of California, Beer’s job is significantly more complicated: She’s trying to put together a shelter amid a pandemic that’s killed 175,000 people in the U.S. alone, and climbing.

“My biggest concerns are safety for any at-risk, vulnerable or immunocompromised populations,” Beer said on Wednesday. “I worry that people will not evacuate when told to do so because they are afraid to stay in a shelter or feel that they have nowhere to go.”

Without a coronavirus vaccine or even widely available rapid testing for COVID-19, it’s even more difficult for Beer and others to find safe spaces for people during a fire. It’s a monumental task to provide immediate shelter for hundreds of frightened people fleeing a raging fire while maintaining all the necessary precautions required by an uncontrolled virus: social distancing, masks and frequent cleaning. It’s a job Beer never imagined eight months ago.

“We are having to alter our plan tremendously,” she said.

California saw a huge surge of COVID-19 cases after businesses began to reopen in June and July, and the state quickly surpassed New York to record the most confirmed cases in the country. Sonoma County, in the northern part of the San Francisco Bay Area, was not immune to this surge; earlier this week, six skilled nursing residents died of the virus, and more than 4,700 people have been infected in the county of nearly 495,000 people.

While the virus spreads, so too do the fires across the state and in Northern California specifically. Gov. Gavin Newsom (D) declared a statewide emergency on Wednesday. More than 8,000 residents in Sonoma County had been ordered to evacuate, as of Tuesday, amid several fires continuing to spread throughout the area.

“We are going to try to work to reduce the stress and reduce the need,” Newsom said at a Tuesday news conference. “But these next few days, we are anticipating being challenged as it relates to all of these conditions that have precipitated at once in this historic moment.”

Beer is preparing to open shelters should more people be ordered to evacuate in her area. To protect against COVID-19, staff members ― those who are willing and able to work in a shelter, that is ― will have to do constant health and wellness screenings and temperature checks, as well as set up isolation units for those who do get sick. Beer is working on mapping out each facility to allow for social distancing between cots and common areas. Sanitation stations and cleaning measures will need to be increased to comply with recommendations from the County Health Officer and the Centers for Disease Control and Prevention. 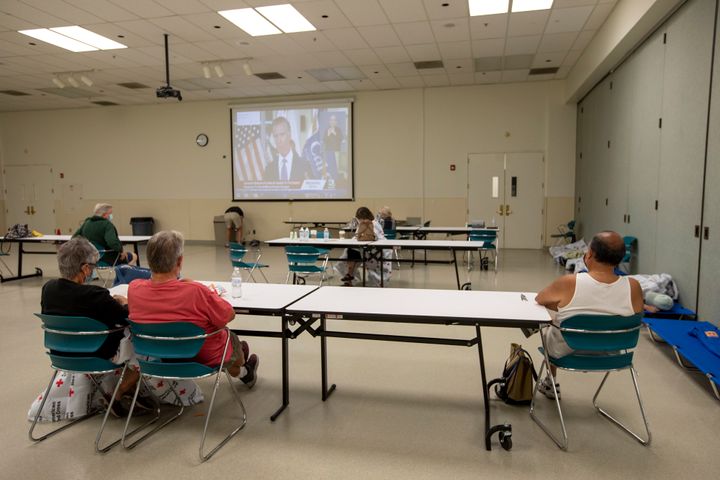 But the number of people any shelter can take will be limited, given the fact that congregate indoor settings are about the ripest places for viruses to spread. After the Camp Fire displaced thousands in Butte County, California, in November 2019, several shelters experienced norovirus outbreaks, adding an extra layer of stress for exhausted evacuees and similarly exhausted shelter organizers who had to provide additional care.

Because of this, Beer and her colleagues are getting creative with solutions.

“We have been in discussion regarding outdoor sheltering for evacuees, working with hotels and lodging, and using campgrounds as an evacuation site,” said Beer. “During a global pandemic such as COVID-19, indoor sheltering poses many risks and complications, so outdoor sheltering or hotels are the first option,” she noted.

But doctors are also concerned about how smoke from wildfires might exacerbate the effects of COVID-19.

“We know that wildfire exposure to communities increases the risk of lower respiratory tract infection,” such as acute bronchitis and pneumonia, Dr. John Balmes, a physician at the University of California, San Francisco, told HuffPost’s Lydia O’Connor. “So there’s concern in the context of the pandemic that wildfire smoke exposure would increase the risk of moving from mild to more severe COVID-19.”

People who run shelters are determined to find solutions that work. Beer was herself evacuated from her home in Windsor, California, amid the 2019 Kincade Fire, and instead of leaving town with her family, she pulled a five-day shift at a shelter in nearby Petaluma.

“It was a terrifying feeling to leave home and not know if you would be able to return, or what state your home would be in when you returned. … I was able to keep my spirits high while working in the shelter because I knew there were people from my community that needed help,” she said.

The American Red Cross is helping some evacuees secure hotel and motel rooms in Northern California. But it’s not abandoning its shelter model altogether, putting safety measures in place like temperature checks, not feeding evacuees buffet-style, and regularly cleaning all of the facilities.

In Solano County, east of the San Francisco Bay Area where the cities of Vacaville and Fairfield are issuing evacuation orders, shelter organizers are trying to keep up with the demand while keeping evacuees safe. Shelters have been established at school buildings (which are largely empty anyway) and community centers.

“It is incredibly difficult” to organize, said Solano County Sheriff’s Deputy Cully Pratt, who called it a “disaster on steroids.”

“We’ve got these shelters, but we’re encouraging people to stay with family or friends if they can,” he said. As of Thursday, the shelters had quite a bit of room for people to spread out and weren’t anywhere near capacity.

Still, Pratt said they’re concerned about providing safe landing zones for the elderly and ensuring that they avoid a COVID-19 breakout.

It’s going as well as expected, Pratt said, but “it’s been pretty tough.”