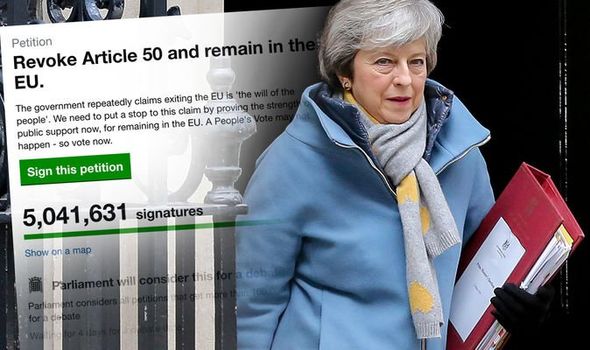 But Brexiteers have voiced their scepticism about the veracity of some of the signatories, pointing out their locations as including Russia, China, Cuba and North Korea. The Revoke Article 50 petition is already the most popular to be submitted to the Parliament website after it overtook a 2016 petition calling for a second EU referendum. As of 2.40pm today, more than 5,016,000 people had put their names to the petition since its launch on Wednesday, including celebrities such as Hugh Grant, Annie Lennox and David Walliams.

It regularly crashed the parliamentary website on Thursday, attracting 2,000 signatures a minute.

“We can do it. We can show them what the ‘will of the people’ means.” 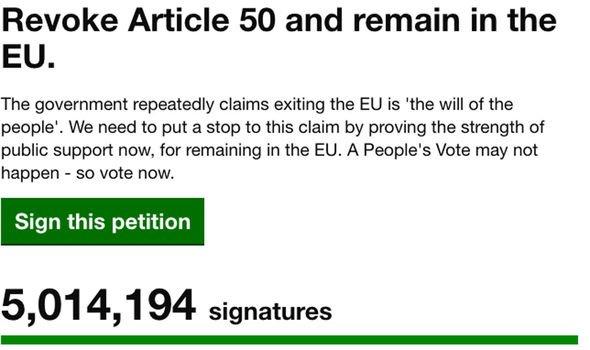 However, others are less impressed, with Brexiteers pointing out it was possible to sign the online document numerous times.

Speaking to Sky News yesterday, arch-Brexiteer and former UKIP leader Nigel Farage said: “That petition is put together and signed by people all over the world including Russia so perhaps you should look at collusion into that place.

“The whole thing is a nonsense. There are people boasting they have signed it 100 times.”

A post on the pro-Brexit Guido Fawkes website, edited by ardent Brexiteer website, said: “Remainers and Leavers alike have been getting a little too excited about the Revoke Article 50 Petition. 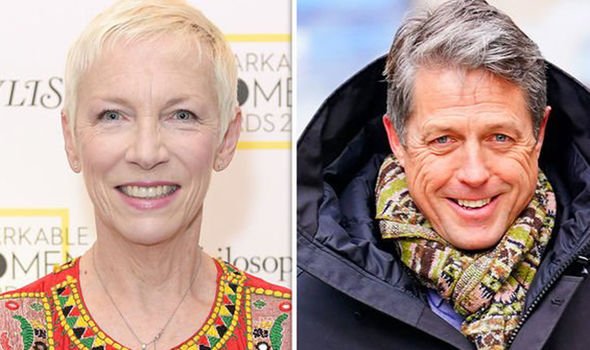 “Yes, you can sign it as many times as you like with made up email addresses and whatever name and country you care to put in.

“Yes, there are videos online explaining in detail how to use bots to hijack Parliamentary petitions – exactly what happened with the second referendum petition immediately after the referendum.

“Is it actually going to stop Brexit? No, that will be MPs.”

One Twitter user said: “That online petition to revoke article 50? I’ve just SIGNED it as Theresa May. Now tell me it’s a genuine, authentic instrument.”

Express.co.uk also signed the petition, as Mickey Mouse, using a valid UK address obtained via an internet search, in seconds.

The House of Commons asks petitioners to confirm their details, including name, email address, and postcode.

The Government Digital Service investigates signature patterns to check for fraudulent activity on petitions, with any signatures which match more than one of the criteria indicating fraud are removed.

A House of Commons statement said: “Much like the traditional paper petitioning system which asks people to provide an address and signature, the e-petitions system aims to strike a balance between allowing people to easily register their support for issues which are important to them, whilst discouraging dishonesty.”

Brexit BOOST: Economy boosted by BILLIONS – THIS is what will happen to GDP in no-deal