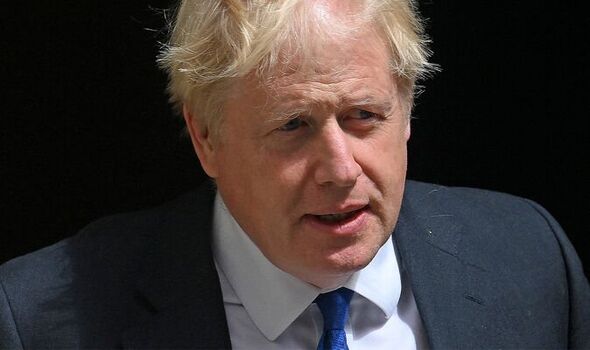 The Prime Minister defiantly vowed to keep serving in the top job last night even after a delegation of his own ministers pleaded with him to stand down.

Mr Johnson was warned he had lost the confidence of the Tory party and should not continue in office.

There have now been more than 50 MPs who have resigned from the Government in protest at the Conservative leader with Downing Street still yet to fill the roles.

A number of Cabinet posts are vacant after the resignations of Northern Ireland Secretary Brandon Lewis and Welsh Secretary Simon Hart, as well as the sacking of Levelling Up Secretary Michael Gove.

The resignation chaos has led to a stalemate in Parliament.

The House of Commons has been forced to cancel important business scrutinising Government legislation today because of a lack of ministers in post available to be involved in the process.

A source close to the Prime Minister told Express.co.uk last night that Mr Johnson was determined not to quit because he “has a mandate from 14 million people to get a job done”, adding: “If the party wants to stop him they have to take that mandate away.”

The comments have alarmed Tory MPs who have accused him of acting in a “Trumpian style”.

Asked if Mr Johnson was right to suggest he had a mandate to continue from voters, he said: “It is obviously a preposterous argument.

“That was not a personal vote. It was a vote for individual candidates across the country.

Tory backbenchers stunned at the behaviour of Mr Johnson are now considering their next moves to remove him from office.

Sir Graham is the “shop steward” of Conservative MPs as chairman of the 1922 Committee which represents them and draws up the leadership rules.

One Tory MP said: “I cannot see Boris staying to do a handover like Cameron or May did.

“I’m not sure colleagues would want it anyway.”

An MP noted: “You can rely on Graham to hold the ship steady while we pick a leader.”

But other alternatives being mooted are Deputy Prime Minister Dominic Raab or even Mr Johnson’s predecessor Theresa May as interim Prime Ministers while “we sort our s*** out.”

There are fears that Mr Johnson’s “refusal to accept he has to go” will make the Conservatives toxic to voters.

An interim leader will give them a chance to hold an election over the summer and have a new leader by the conference in the autumn.

An MP said: “That way we have the chance to have a fresh leader, properly reset and we have up to two years to turn things around with voters.”