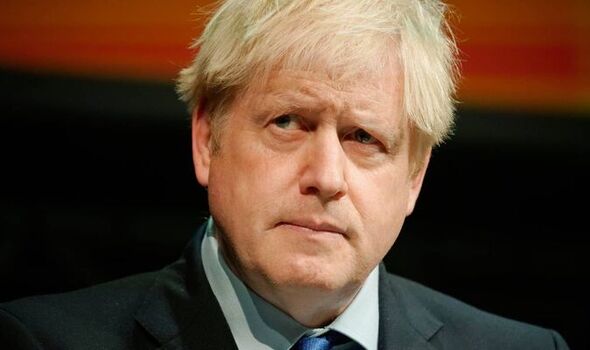 The PM, his wife Carrie and Rishi Sunak paid £50 penalties over the No10 party in June 2020 – but last night both Cabinet ministers signalled they would not resign.

Mr Johnson said it “did not occur” to him that the nine-minute bash to mark his 56th birthday had breached lockdown rules. But he apologised “in the spirit of openness and humility” and added that he understood voters’ anger after he “fell short”.

As the Opposition called for him to quit, the Prime Minister insisted that he wants to tackle the country’s problems – and help Ukraine drive out tyrant Vladimir Putin.

Mr Johnson – the first premier to have been found to have broken the law while in office – last night pledged to “do what is best for the country I serve”.

Speaking from his Chequers country residence, he said: “I understand the anger that many will feel that I myself fell short when it came to observing the very rules which the Government I lead had introduced to protect the public, and I accept in all sincerity that people had a right to expect better.

“And now I feel an even greater sense of obligation to deliver on the priorities of the British people: strengthening our economy; creating jobs and opportunity; levelling up across the whole of the United Kingdom; now, of course, ensuring that Putin fails in Ukraine and easing the burden on hardworking families caused by higher energy prices.

“I will take that forward, that task, with due humility, but with maximum determination, to fulfil my duty, and do what is best for the country I serve.”

The PM said he spent nine minutes at the gathering in a day when he chaired eight meetings and visited a school.

Mr and Mrs Johnson have both paid their fines but are braced for further Fixed Penalty Notices as Scotland Yard officers examine more serious and complex allegations of lockdown rule-breaking in Downing Street.

The PM said he “couldn’t be everywhere at once” when asked about the widespread nature of parties across Whitehall:

“Of course I take full responsibility for everything, but don’t forget the Downing Street is about, you know, 15,000 square feet. It’s got a lot of officials working in it – hundreds and hundreds of officials…I couldn’t be everywhere at once.

“But clearly once it became obvious what had been happening, the types of behaviour that unfortunately sadly we’d seen, we’ve taken steps to change things and Downing Street has been radically transformed. We’re focusing 100 per cent on delivering our agenda.”

Labour urged the Prime Minister to quit and to recall MPs from their Easter break to let the development be discussed in the Commons.

A snapshot of support among Express.co.uk readers found 62 per cent wanted Mr Johnson and Mr Sunak to remain in post, with 38 per cent wanting them to quit.

The surprise birthday get-together on June 19 2020 was organised by Mrs Johnson.

Northern Ireland minister Conor Burns later said the Prime Minister was “in a sense, ambushed with a cake”.

The Chancellor had been in No 10 to attend a covid meeting and had not been expecting to receive a fine.

But the decision by the police has left him suffering another political wound after days of negative stories about his family finances and anger over his spring statement.

Foreign Secretary Liz Truss, who has been long-viewed as having ambitions for the top job, issued a statement throwing her support behind the PM and his Chancellor.

She said: “The Prime Minister has apologised and taken responsibility for what happened in Downing Street. He and the Chancellor are delivering for Britain on many fronts including on the international security crisis we face. They have my 100 per cent backing.”

The Prime Minister said he “spoke in completely good faith” when he repeatedly said all guidelines were followed in Downing Street as it did not occur to him that he was in breach of the rules.

“I now humbly accept that I was,” he added.

“But I think the best thing I can do now is, having settled the fine, is focus on the job in hand. That’s what I’m going to do.”

Sir Keir Starmer, a former director of public prosecutions, said the police’s decision marked the “first time in the history of our country that a prime minister has been found to be in breach of the law”.

The Labour leader accused Mr Johnson of “repeatedly” lying about what happened during lockdown in Downing Street.

Sir Keir also argued that the Tory leader and Mr Sunak had “dishonoured” the sacrifices made by Britons who did follow the rules during the pandemic.

“The British public made the most unimaginable, heart-wrenching sacrifices, and many were overcome by guilt,” he said.

“But the guilty men are the Prime Minister and the Chancellor.

“Britain deserves better, they have to go.”

A spokesman for Mrs Johnson said the former Tory director of communications had paid the fine, which is understood to have been £50 if settled within 14 days.

“Whilst she believed that she was acting in accordance with the rules at the time, Mrs Johnson accepts the Metropolitan Police’s findings and apologises unreservedly,” her spokeswoman said.

In a tweet, Transport Secretary Grant Shapps said: “At end of 2020 I was unable to visit my dad in hospital for (four months), so share the anger felt about Downing (Street) fines.

“But I also recognize PM has apologised, accepted responsibility & reformed No10. Now, as he leads the West’s response to (Vladimir) Putin’s evil war he has my full support.”

“Today, I have received a fixed penalty notice from the Metropolitan Police relating to an event in Downing Street on June 19 2020. And let me say immediately that I paid the fine and I once again offer a full apology. And in a spirit of openness and humility, I will be completely clear about what happened on that date.

“My day began shortly after 7am and I chaired eight meetings in Number 10, including the Cabinet committee deciding Covid strategy. I visited a school in Hemel Hempstead, which took me out of Downing Street for over four hours. And amongst all these engagements, on the day that happened to be my birthday, there was a brief gathering in the Cabinet Room shortly after 2pm, lasting for less than 10 minutes, during which people I work with kindly passed on their good wishes.

“And I have to say, in all frankness, at that time it did not occur to me that this might have been a breach of the rules. But of course, the police have found otherwise and I fully respect the outcome of their investigation. I understand the anger that many will feel that I myself fell short when it came to observing the very rules which the Government I lead had introduced to protect the public and I accept in all sincerity that people had the right to expect better.

“And now I feel an even greater sense of obligation to deliver on the priorities of the British people: strengthening our economy; creating jobs and opportunity; levelling up across the whole of the United Kingdom; now, of course, ensuring that Putin fails in Ukraine and easing the burden on hardworking families caused by higher energy prices. I will take that forward… that task, with due humility, but with maximum determination, to fulfil my duty, and do what is best for the country I serve. Thanks very much.”