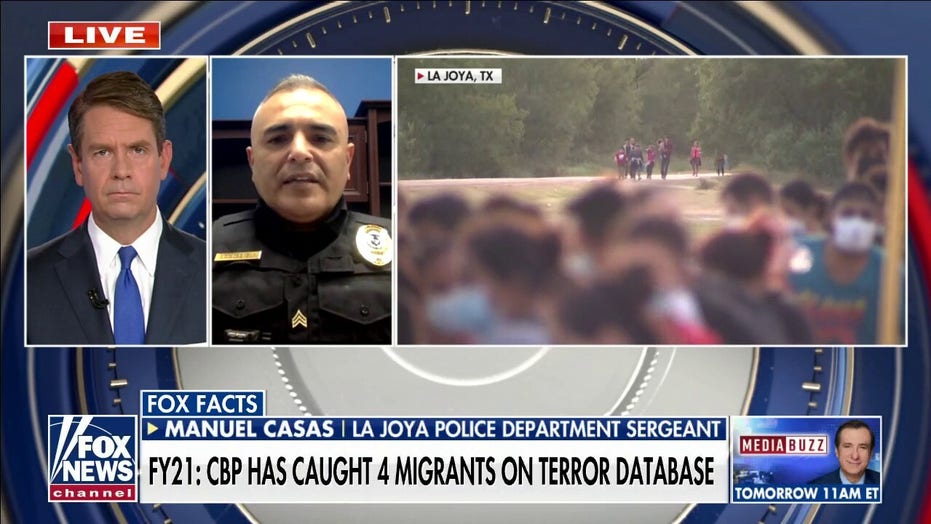 La Joya Police Department Sgt. Manuel Casas on one million immigrants being encountered at the south west border since February.

When President Biden took office in January, his administration ordered an immediate halt on the construction of a 30-foot high border fence, leaving a gaping hole at one of the most vulnerable stretches of the US-Mexico border.

The 20-foot gap in the frontier wall at Border Monument Three — one of the 276 original markers erected after the Mexican-American War in 1848 — was allowing thousands of smugglers and migrants to cross into the US with relative ease, Border Patrol agents told The Post last week.

“The contractors just stopped,” said Richard Barragan, a Border Patrol agent in the El Paso Sector, pointing to the broken wall and a brace leftover by federal contractors still hanging from the iron fence when they hastily abandoned construction in January.

Along the nearly 2,000-mile southern border, thousands of tons of steel and other building materials have gathered rust since the order to halt construction, Border Patrol agents said.

Desperate to stem the migrant flow at the remote, mountainous site at the confluence of the Texas, Mexico, and New Mexico border, Border Patrol agents took it upon themselves to plug the hole — with old truck tires and pieces of stray construction materials that were left behind by the federal contractors.

“We have some agents who are good welders, and they put it all together,” Border Patrol agent Barragan said.

In June, the Biden administration formally announced plans to pull $2.2 billion of funding allocated by President Trump for the construction of the border wall and spend it on other projects amid a surge in migrant border crossings.

The Department of Homeland Security said in June that it would redirect the construction cash — which it called “just one example of the prior Administration’s misplaced priorities and failure to manage migration in a safe, orderly, and humane way” — to the Pentagon for building projects on US military bases.

“Appropriated funds could also be used for mitigating some environmental damage caused by border wall construction,” the statement noted.

Trump oversaw the construction of more than 450 miles of border wall, a key campaign promise that Democrats bitterly opposed, but one that has been welcomed by Border Patrol agents on the ground.

“The wall enhances my officers’ safety,” said Gloria Chavez, chief patrol agent of the El Paso Sector. “It delays entry and allows the agent to have the advantage. Additionally, it protects the agent.”

Over the last year, attacks by smugglers and drug traffickers against Border Patrol agents have nearly doubled in the El Paso Sector, from 23 in FY2020 to 40 so far this year.

“Any infrastructure is helpful to us,” said Barragan, surveying the makeshift construction that roughly covers the gap. “These are just some of the challenges we face every day.”