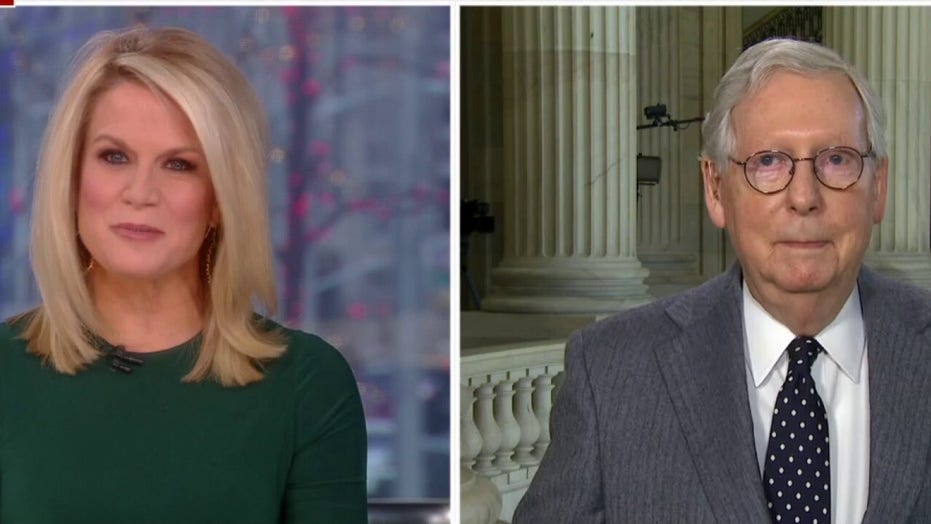 McConnell: COVID bill ‘wildly out of proportion to what country needs’

EXCLUSIVE: A pro-GOP outside group closely aligned with the Republican Governors Association (RGA) is launching an effort in three states against Democratic governors ‒ who could face challenging reelections next year ‒ over the $1.9 trillion COVID-19 relief package being pushed by President Joe Biden.

The new TV ads by State Solutions Inc., shared first with Fox News, will run in Maine, Minnesota and Wisconsin. The governors in those states, all first-term governors – Janet Mills, Tim Walz and Tony Evers ‒ are up for reelection next year in races that may be extremely competitive.

The ads spotlight an analysis by House Budget Committee Republicans, which estimates that the bill, which conservatives call the “Biden’s Blue State Bailout,” will cut $155 million from Maine, $805 million from Minnesota and $265 million from Wisconsin — while giving billions in new funding to California and New York, large states controlled by Democrats.

The ads, tailored to each of the three states, ask the Democratic governors and senators in those states to “stand up” for their constituents “and oppose the California and New York bailout bill.”

State Solutions, which works closely with the RGA, wouldn’t reveal the dollar amount but told Fox News there’s a “substantial buy” behind the spots, which they say will run Thursday through Sunday statewide in Maine, Minnesota and Wisconsin.

“The people need to demand their governors and senators do what is best for their state and stand up to their party bosses in D.C.,” State Solutions president Dave Rexrode told Fox News.

Rexrode, who’s also RGA executive director, argued that “taxpayers will be on the hook for this latest COVID package, and now their states will lose millions in COVID relief if these Democrats refuse to stand up to Biden and Pelosi. Families and businesses are already struggling because of COVID, and they are set to face even more challenges if their Governors and Senators don’t take a stand against Biden’s Blue State Bailout.”

The massive relief bill was passed last week virtually along party lines by the Democratic controlled House. Debate and the first votes in the Senate – where the Democrats hold a razor-thin majority – is expected to take place on Thursday.

38 STATES TO HOLD GUBERNATORIAL ELECTIONS THIS YEAR AND NEXT: THE RACES TO WATCH

Congressional Republicans are unified in their opposition to the measure, and the portion of the bill that draws the most fire from the GOP is the $350 billion in the package to help cash-strapped states, localities and tribal governments amid an economy flattened by the coronavirus pandemic.

GOP lawmakers, pointing to the ballooning national debt, say the aid is an unnecessary “liberal wish list” that would benefit blue states over red states.

“They want to send wheelbarrows of cash to state and local bureaucrats to bail out mismanagement from before the pandemic,” Senate Republican Leader Mitch McConnell charged on Wednesday. “They’re changing the previous bipartisan funding formula in ways that will especially bias the money toward big blue states.”

Democrats – as well as a bipartisan group of mayors – strongly support the funding as states and localities deal with a surge in public assistance amid declining tax revenues from the economic shutdown due to the pandemic.

“Funding to keep teachers, firefighters, transit workers, first responders in red states and blue on the job – not a liberal wish list. An American wish list,” Senate Majority Leader Chuck Schumer argued Wednesday. “So many of the people affected by this bill are not liberals or Democrats. They may be Republicans, they may be independents, they may be conservatives. But they’re Americans who want some help to get out of this morass.”

The GOP currently controls  27 of the 50 governorships. But more Americans live in states with a Democrat as governor.

Thirty-eight of the 50 states will hold gubernatorial elections this year and next year. Put another way – nearly 85% of Americans will have the opportunity to vote for governor in 2021 and 2022. At least a dozen of the gubernatorial showdowns are currently considered by political pundits to be competitive.