Former Vice President Joe Biden announced Thursday that he is running for the 2020 Democratic presidential nomination, positioning himself as the only candidate who can defeat President Donald Trump.

Biden, 76, plans to frame the race as a battle for the soul of the nation, and will focus his campaign on an agenda of rebuilding and expanding the middle class and bridging the country’s partisan divide.

“If we give Donald Trump eight years in the White House, he will forever and fundamentally alter the character of this nation, who we are. And I cannot stand by and watch that happen,” Biden said in announcing his decision via posts on social media. “The core values of this nation, our standing in the world, our very democracy, everything that’s made America America is at stake. That’s why today I’m announcing my candidacy for president of the United States.”

Biden will follow up with a fundraiser on Thursday, then a rally Monday in Pittsburgh, according to his campaign. Over the next week and a half he’ll make stops in Iowa, New Hampshire, Nevada and South Carolina, the first states to hold primaries or caucuses.

Biden enters the race as a front-runner in a field that now includes 20 candidates, though he no longer appears as dominant as he once did. His campaign began months later than many of his backers anticipated, giving opponents a head start in building their teams, raising money and attracting supporters.

After several women came forward in late March to say they’d felt uncomfortable with the way Biden had touched them, some Democrats began to more openly question whether he would be the right candidate to take on Trump.

The former six-term senator from Delaware still leads in many early-state and national polls of primary voters — ahead of his nearest rival, Senator Bernie Sanders of Vermont. But his edge in many surveys — driven largely by his nearly universal name recognition — has diminished.

He has run for president twice before and this is the first time he’s entering the race as a leading candidate, making him a magnet for attacks after encountering little criticism from his fellow Democrats since he became Barack Obama’s running mate more than a decade ago.

He’ll still be able to draw on many Democrats’ warm feelings for the Obama era, though the former president is not expected to make any endorsements before a nominee is chosen.

Biden has never been a particularly prolific fundraiser and he’ll need millions to run a nomination campaign. Many big Democratic fundraisers and donors have held off backing other candidates, though some party supporters have expressed doubts about Biden, especially as he drew out his decision and candidates like Pete Buttigieg, the mayor of South
Bend, Indiana, piqued their interest.

The former vice president will also need to prove his ability to draw grass-roots financial support, which has been increasingly important to Democrats not just for the dollars it brings in but also because of the message of popular backing it conveys.

Still, Biden and his allies believe he’s well situated for the race ahead. They see him as more appealing to working-class white voters in the Rust Belt than other Democratic hopefuls, illustrated by his putting his first events in Pennsylvania. That would position him well in the general election against Trump, making up for weaknesses that cost Hillary Clinton the Electoral College vote in 2016.

Biden hasn’t weighed in on some of the key issues of the campaign, including impeachment, Medicare for All and the Green New Deal, but he’s likely to take a more centrist approach. His supporters view his moderation as an asset for a nominee, though skeptics see it as an impediment to winning over a primary electorate that appears to be moving further to the left.

With Biden’s announcement, the Democratic campaign enters a new phase leading up the first primary debate, scheduled for two nights in late June. Before then, candidates are barred by the Democratic National Committee from interacting with one another at events, but there will be a steady stream of forums where hopefuls appear on the same stage back-to-back to answer questions from primary voters.

“This is Joe Biden’s third time running for president, but it’s the first time he’s running as a front-runner and the first time he will have a target on his back for the whole field,” said Democratic strategist Rebecca Katz.

While Biden has clear strengths, he begins his campaign with plenty of liabilities, including his age — four years older than Trump — and a sense among some that he’s out of touch with the Democratic electorate, especially younger voters. He has a longer political record than any other potential 2020 candidate, and it includes scores of positions that are now unpopular with Democratic voters. He’s distanced himself from some positions and apologized for some others.

“People can change,” Biden said at the April 16 funeral of former South Carolina Senator Fritz Hollings, who began his career as a segregationist but later changed his views. “We can learn from the past and build a better future.”

Biden’s words echoed the promise he made after the complaints from women about touching. He said he would move forward with greater respect for the personal space of the people he meets, and would make efforts to show that he no longer stands by all the political positions he took years ago.

“Voters want to know whether or not Joe Biden is in tune with where the party is today,” said Democratic strategist Doug Thornell. “I think he is, but until he lays out his theory of the case, his vision, his narrative and then campaigns on it, we won’t know.”

His opponents have already begun to dig up actions and words that reflect poorly on him, at least with primary voters. Justice Democrats, a progressive group aligned with freshman Representative Alexandria Ocasio-Cortez of New York, tweeted a 1991 video of Biden praising Bill Barr, who had been nominated for attorney general, as someone he “can work with.”

Barr, who is now attorney general in the Trump administration, has been roundly criticized by Democrats who say he misrepresented Special Counsel Robert Mueller’s report before its release. 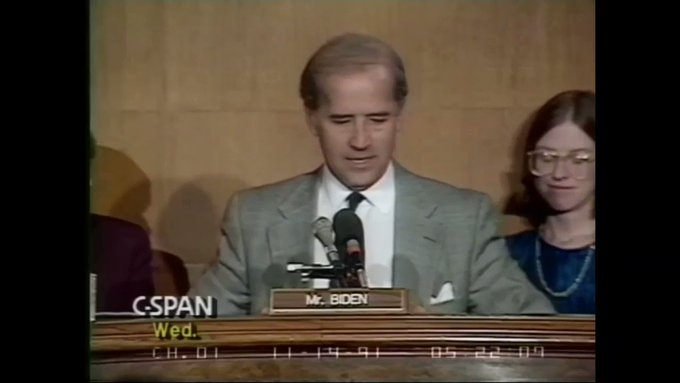 Biden voted for the Iraq war, though by 2005 hesaid it was a mistake to assume that President George W. Bush “would use the authority we gave him properly.” He also voted for the North American Free Trade Agreement and for bills banning late-term abortions and has said that life begins at conception, though he now supports a woman’s legal right to abortion.

He sided with credit card companies — many with large presences in his home state of Delaware — in advocating for legislation in 2001 and again in 2005 to make it more difficult for Americans to declare bankruptcy. It was fiercely opposed by then-Harvard professor Elizabeth Warren, now a senator from Massachusetts and one of Biden’s rivals for the nomination.

As Senate Judiciary Committee chairman during the 1991 Supreme Court confirmation process for Clarence Thomas, Biden was reluctant to share Anita Hill’s sexual harassment allegations against Thomas and declined to allow additional witnesses to testify on her behalf.

He was criticized at the time by women’s and liberal groups. Biden has tried at least three times since late 2017 to address his handling of the Hill episode, including by saying he owed her an apology, though he never reached out to her directly. “To this day I regret I couldn’t give her the kind of hearing she deserved,” hesaid in March. “I wish I could have done something.”

Biden has said his biggest legislative achievement was the Violence Against Women Act, which was first passed in 1994. It was part of legislation that’s sometimes called the Biden crime law, which also included the 10-year Federal Assault Weapons Ban and encouraged the sort of mass incarceration that criminal justice advocates on both sides of the aisle are now pushing to reverse.

As vice president, Biden took on a key role on foreign policy and in working with Congress. After the December 2012 mass shooting at Sandy Hook Elementary School, he spent several months leading the Obama administration’s efforts to combat gun violence, which ended in the defeat of Obama-endorsed gun control legislation.

He chose not to run for president in 1984 because his children were too young, but in June 1987, at age 44, he got into the 1988 race, confident he could appeal to blue-collar and younger voters. He gained some traction in polls and was second only to Massachusetts Governor Michael Dukakis in fundraising.

But Biden’s campaign ran aground in September 1987. As has been the case for him before and since, he made repeated gaffes, but the words that became most problematic for his candidacy were those of others. Within two weeks of the first reports that a campaign speech tracked closely with one given earlier that year by British Labour Party leader Neil Kinnock, Biden dropped out of the race.

Journalists had uncovered other instances when he’d plagiarized speeches by politicians, including Robert Kennedy and Hubert Humphrey, as well as an incidentduring his first year of law school.

Biden spent the next two decades focused on his work in the Senate before making another run at the presidency, beginning in early 2007. He was in the middle of the pack throughout that year, behind Clinton, Obama and John Edwards, and finished fifth in the Iowa Caucuses on Jan. 3, 2008, with just 1 percent of the vote. He dropped out that night but vowed “I ain’t going away.”

Seven months later, Obama tapped him as his running mate.

As the 2016 campaign ramped up, Biden considered entering the small field of candidates for the Democratic nomination, agonizing well into 2015 about the decision. In May of that year, his elder son, Beau, a former Delaware attorney general who also had presidential aspirations, died of brain cancer, taxing the close-knit family and the heart-on-his-sleeve vice president.

By the time Biden and his family determined they were ready for a run, he concluded that it was too late. “I couldn’t do this if the family wasn’t ready. The good news is the family has reached that point,” Biden said in an unusual political speech in the White HouseRose Garden. “Unfortunately, I believe we’re out of time, the time necessary to mount a winning campaign for the nomination.”

After Clinton’s loss in 2016, Biden kept his options open for 2020 by building a political action committee, hitting the campaign trail for 2018 candidates and steering clear of the lucrative corporate speaking circuit that became a liability for Clinton.

A few months after Trump took office, Biden said that while he didn’t regret not running in 2016, he did regret “not being president.”

Shutdown Begins as Trump and Democrats Negotiate on Border Wall

Trump and Democrats Stake Out Ground Far Away From Ending Shutdown