White House press secretary Jen Psaki said President Biden is “open to engaging” with both Democrats and Republicans in Congress ahead of his meeting with GOP senators Monday in the Oval Office to discuss a potential compromise on a coronavirus relief plan, adding that, in his view, the “risk” would be moving forward on a package that is “not big enough” to address the needs of Americans amid the pandemic.

The president invited a group of 10 Republican senators, led by Sen. Susan Collins of Maine, to the White House Monday to discuss a potential compromise on a coronavirus relief plan that could gain bipartisan support to pass the Senate.

The Republicans announced a $600 billion plan Sunday, which includes $1,000 per person stimulus checks and $300 per week in boosted unemployment benefits through June 30.

The package, though, is significantly smaller than that of Biden’s American Rescue Plan, which would cost a whopping $1.9 trillion.

Psaki, on Monday, said Biden has “been clear since long before he came into office that he is open to engaging with both Democrats and Republicans in Congress,” and called Monday’s meeting with GOP senators an “opportunity” for an “exchange of ideas.”

“I think the president believes we can, and that there is historic evidence, that it is possible to take a number of paths, including through reconciliation and for the vote to be bipartisan,” Psaki said, adding that Biden is open to hearing Republican “concerns and ideas,” and is “always open to making this package stronger.” 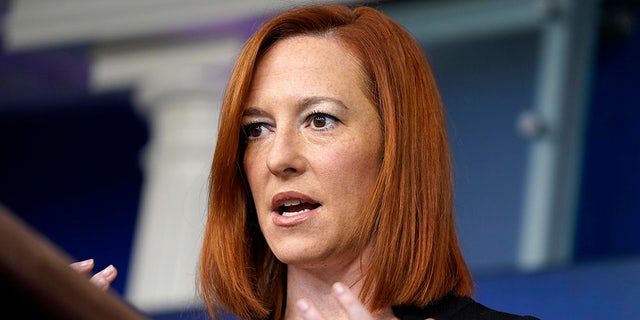 Psaki added that the meeting Monday is an “effort to engage on a bipartisan basis and that is why he invited them to the White House today.”

“But his view is that the size of the package needs to be commensurate to the dual crises we are facing,” Psaki said, adding that the president “clearly” thinks the White House package “needs to be closer to what he proposed.”

“Reopning schools, getting shots in the arms of Americans, ensuring people have food to eat, those are not Democratic issues,” Psaki said. “He wants to have the conversation with Republicans…He welcomes the opportunity to work with members.”

Psaki also assured that House Speaker Nancy Pelosi, D-Calif., and Senate Majority Leader Chuck Schumer, D-N.Y., have been directly in touch with the president and members of the senior team at the White House.

Psaki called movement on the coronavirus relief package “incredbily urgent,” but did say, however, that there “is still time to make changes and to continue to have a discussion.”

Even if Biden and Republicans do come to a compromise somewhere between their respective proposals, it’s not clear that plan would be able to round up support from all 50 Senate Democrats, who are pushing for bold and immediate action. Congressional Democrats this week will introduce budget resolutions in each chamber, the first step towards the once-per-fiscal-year parliamentary gambit of budget reconciliation. Using that, they can pass a bill with no GOP support, though it may take weeks.