WASHINGTON – President Joe Biden paid a visit to the 39th president Jimmy Carter and his wife, Rosalynn, during a trip to Georgia Thursday, a day after Biden delivered his first joint address to Congress.

The president and first lady Jill Biden traveled to Plains, Georgia, to meet the Carters before attending a drive-in rally in Atlanta to mark his first 100 days in office this week.

The trip to Georgia, a politically pivotal state that helped Biden win the presidency and secure a razor-thin Senate majority for Democrats, is part of what has been billed the “Getting America Back on Track” tour. Biden plans to hit the road in the coming days to pitch Americans on his $4 trillion spending proposal on infrastructure and more progressive policies like education and childcare, much like he did following the passage of his COVID-19 relief package, according to the White House.

Carter, 96, and his 93-year-old wife were unable to travel to Washington for Biden’s inauguration because of the coronavirus pandemic. Carter has mostly been absent from public life after a series of health setbacks – including a string of falls that led him to undergo a brain procedure in 2019 – as well as concerns about the pandemic. The couple has since been vaccinated. 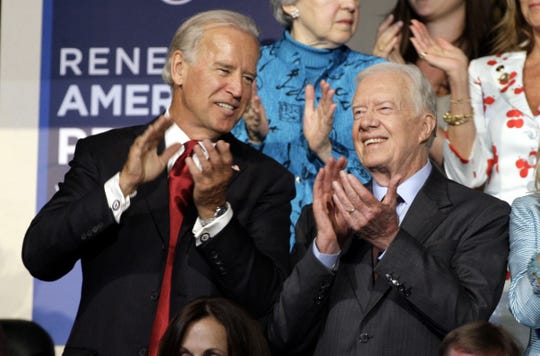 Biden, who said he spoke with Carter on the eve of his inauguration, saluted the former Democratic president for “a lifetime of service” during his January inaugural address. The Carters appeared virtually at the Democratic National Convention last year to praise Biden as a loyal supporter and friend.

“Joe Biden was my first and most effective supporter in the Senate. For decades, he’s been my loyal and dedicated friend,” Carter said in a recorded statement. “Joe has the experience, character and decency to bring us together.”

More: Joe Biden wants to spend $2 trillion on infrastructure and jobs. These 4 charts show where the money would go.

Former US presidents and first ladies have joined a campaign by the Ad Council urging Americans to get vaccinated as soon as they can.

Biden was a junior senator from Delaware in 1976 when Carter was elected president. Former vice president Walter Mondale, who served under Carter, died last week at age 93 in Minneapolis. Following his death, Biden issued a statement saying that he and the first lady spoke to Mondale before his death “to reflect on the years of friendship we shared, and how much we learned from and leaned on each other.” 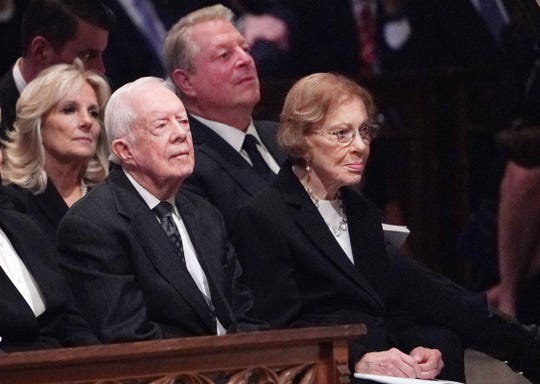