Biden aide and White House counselor Steve Ricchetti now has not one but three children working within the administration, including son J.J. Ricchetti who was just hired by the Treasury Department as a Special Assistant in the Office of Legislative Affairs.

Ricchetti, a recent University of Pennsylvania graduate, in his Instagram bio included a link to a document about supporting the Defund the Police movement and donating to bail funds for protesters. The document, titled “#blacklivesmatter,” also included links to social media posts about how to disable tanks. 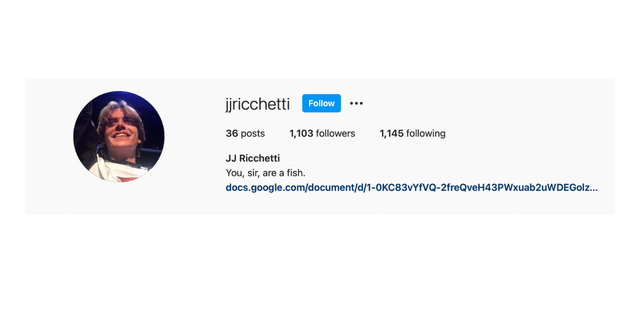 The link was removed after an inquiry to Treasury from Fox News.

Another of Steve Ricchetti’s sons, Daniel Ricchetti, is a senior adviser in the office of the under secretary of State for arms control and international security, and his daughter Shannon Ricchetti is deputy associate director at the office of the White House social secretary.

Walt Shaub, former director of the United States Office of Government Ethics, called the situation “positively ridiculous” in a statement to Fox News.

“Haven’t we had enough of nepotists in presidential administrations?” Shaub said. “It may be legal if Ricchetti wasn’t directly involved in the hiring, but this is no way to send a message that ethics matters to the administration. It feels like the taxpayers are funding a career-building charity for the Ricchetti family. Add to that the fact that you’ve got Ricchetti’s brother lobbying the administration, and this feels like a very special episode of the Partridge Family where they all pile in the van and go visit Washington — only they should call this show the Patronage Family.”

Steve Ricchetti’s brother Jeff Ricchetti is a lobbyist. Jeff Ricchetti said in April that while he has been in touch with the Biden administration, he does not lobby his brother. 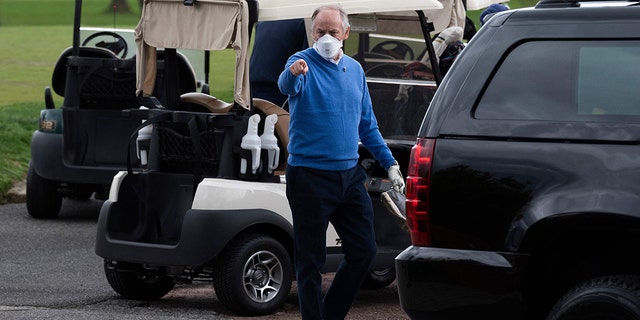 Counselor to the President Steve Ricchetti (C) gestures after playing a round of golf with US President Joe Biden at Wilmington Country Club in Wilmington, Delaware on April 17, 2021. (Photo by JIM WATSON/AFP via Getty Images)
(Getty)

“I do not lobby my brother and I have not even mentioned to him the names of clients that I currently represent,” Jeff Ricchetti previously told CNBC. “For the better part of the last thirty years I have lobbied Members of Congress and their staff, and various individuals who have served in the successive Administrations. It is what I do for a living.”

J.J. Richetti appears to have less experience than previous Treasury staffers who held the same position.

Clement Abonyi Jr. appears to be the former special assistant whom J.J. Ricchetti is replacing at Treasury, according to Legistorm, the congressional staff data tracking service. Abonyi joined the Biden administration in January and left earlier this month to join the Democratic Congressional Campaign Committee (DCCC) as the member engagement director.

Unlike Abonyi, who moved up the ranks from staff assistant to Director of Member Services for Rep. Maxine Waters, D-Calif., over a three-year period and specialized in financial matters working with the House Financial Services Committee, Ricchetti is joining the Treasury Department in the same position a year after graduating from college.

Arian Rubio, another special assistant who joined the Treasury Department’s Legislative Affairs office in March 2021, has had at least eight internships and multiple years of experience, according to Linkedin. Prior to joining the Treasury Department, Rubio was a Legislative Correspondent for Sen. Elizabeth Warren, D-Mass., for over two years, where he worked “with committee staff and stakeholder organizations and wrote hearing questions and memos to advance the Senator’s priorities on the Banking, Housing, & Urban Affairs Committee, Finance Committee, and Health, Education, Labor, & Pensions Committee.” He also worked as a legislative associate at the League of Conservation Voters for almost two years. One of his internships was at the White House during the Obama administration.

However, a White House spokesperson pointed out that other recent college graduates have held the same position, like Shweta Wahal, who worked for Treasury in 2016 and 2017 after interning with the Office of the U.S. Trade Representative, according to her LinkedIn.

A White House spokesperson told Fox News that the administration prioritized hiring former Biden campaign volunteers like J.J. Ricchetti. The spokesperson pointed out that he is filling an entry-level position and argued that J.J. Ricchetti had the appropriate qualifications.

Regarding the document removed from his Instagram bio, J.J. Ricchetti “absolutely doesn’t” support every link in it, a person familiar with J.J. Ricchetti’s thinking about the post told Fox News.

“He was upset after the killing of George Floyd, and shared what he thought was a document about how to get involved in stopping more of that kind of violence. It was long and he didn’t see every link on it,” the person told Fox News. “He was just generally trying to call attention to the kind of violence that led to George Floyd’s death.”

The Trump administration faced accusations of nepotism due to former president Donald Trump’s reliance on his daughter Ivanka Trump and son-in-law Jared Kushner to advise him. Neither Ivanka Trump nor Kushner took a salary during their time as advisers to Trump, and for 2020 and early 2021 they saw their personal income drop more than 20% from 2019 and early 2020, Bloomberg News reported.

The Trump administration also received criticism for hiring relatives of Trump and top aides. Kyle Yunaska, the former president’s son Eric Trump’s brother-in-law, was hired as chief of staff of the Office of Energy Policy and Systems Analysis in 2017. Former White House adviser Sebastian Gorka’s wife Katharine Gorka was senior adviser in the Office of Policy at the Department of Homeland Security from 2017 to 2019. Secretary of Education Betsy DeVos’ husband Richard DeVos, former CEO of Amway, was appointed to the Federal Aviation Administration’s Management Advisory Council in 2017. Betsy DeVos’ sister-in-law Pamella DeVos was appointed to the Board of Trustees of the John F. Kennedy Center for the Performing Arts in 2020.

This post has been updated with information about Shweta Wahal.