Six months into the pandemic and with no coherent national testing strategy, the Trump administration is encouraging private development of an array of faster and cheaper techniques. 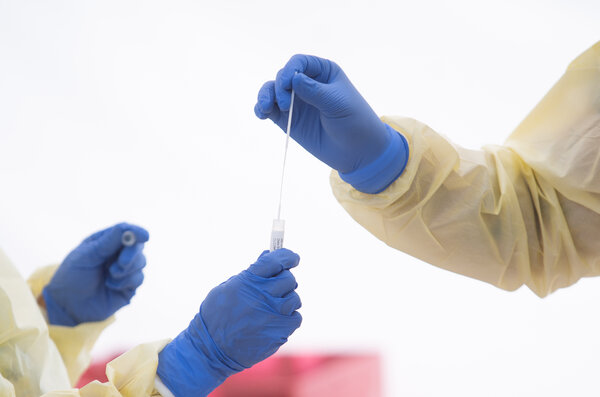 WASHINGTON — The coronavirus pandemic remained a distant threat to many Americans on Jan. 24 when Douglas C. Bryant, the president and chief executive officer of Quidel Corporation, got a call from an official at the Food and Drug Administration.

If the government helped, the official asked, would Quidel make tests to detect coronavirus infections?

Mr. Bryant decided to go for it, even though some experts at the time were predicting the United States would quickly tame any outbreak.

The gamble has paid off. Quidel, a San Diego-based maker of diagnostic tests, developed a swab-based coronavirus test that produced results from an analyzer in 15 minutes. It sold 1.2 million of them for less than $20 apiece to the federal government for use at nursing homes. A grant from the National Institutes of Health is enabling Quidel to expand its production by about 140 million tests a year, company officials said.

With the pandemic still raging as fall approaches, the government’s efforts to support development and deployment of a variety of testing methods are a rare if belated bright spot amid widespread failures to contain the virus.

In the latest round of government backing, the N.I.H. said on Wednesday that it was providing nine more companies with $123.3 million from a $2.5 billion pot of money allocated last spring by the stimulus bill to support testing. That will bring the total amount disbursed so far by the N.I.H. to $372 million across 16 companies.

The goal is to support production of a broad spectrum of tests, making them more widely available and perhaps ultimately as easy to use as a home pregnancy test. Tests must show that they meet the Food and Drug Administration’s standards for safety and accuracy before they can be sold.

“It’s going to be a wonderful competition,” Dr. Francis S. Collins, the N.I.H. director, said in an interview on Tuesday evening.

Yet even as the government helps rush new tests to market, the administration continues to issue conflicting — and sometimes flatly contradictory — messages about how many and what types of tests are needed, when they should be administered and to whom.

President Trump has long derided testing, complaining that it drives up the number of confirmed cases. The lack of a clear national strategy has confused the public, deeply frustrated public health officials and befuddled pharmaceutical executives.