AstraZeneca: Kit Malthouse says scientists 'tell us all is well'

The AstraZeneca vaccine rollout was halted in seven countries, including Ireland, the Netherlands and Denmark after several people who received the jab developed blood clots. Policing minister Kit Malthouse dismissed the concerns as he noted scientists in the UK have been reassuring health officials about the efficacy of the coronavirus vaccine. Speaking to Sky News, Mr Malthouse said: “Scientists tell us all is well and that the incidence of these particular problems is no greater than you would expect in the population at large.

“These things naturally occur anyway. Obviously, the vaccine has been through very stringent testing before it was authorised for use.

“We’ve got some of the highest standards in the world for medical products over testing.

“In fact, as the founder of the all-party group on life sciences before I became minister, I can attest to that.”

The Conservative minister added: “I’m hoping to be called for a vaccine in the next few weeks myself and if it’s AstraZeneca I will happily take it in my arm.” 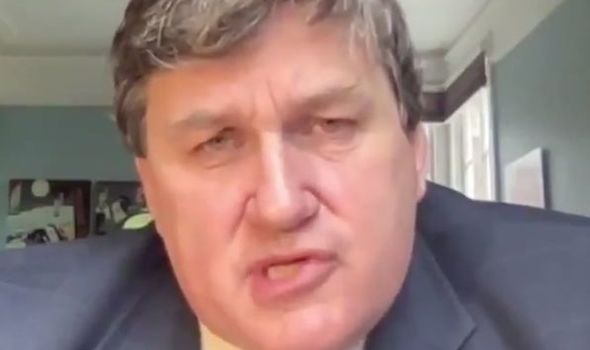 AstraZeneca said on Sunday it had undertaken a “careful review” of data from more than 17 million people vaccinated in the United Kingdom and European Union, which showed “no evidence of an increased risk of pulmonary embolism, deep vein thrombosis or thrombocytopenia.”

After Ireland announced on Sunday that it was suspending the use of the jabs as a “precautionary step”, the UK’s medicines regulator said the available evidence “does not suggest the vaccine is the cause” of clots.

Dr Phil Bryan, vaccines safety lead at the Medicines and Healthcare products Regulatory Agency (MHRA), said people “should still go and get their Covid-19 vaccine when asked to do so.”

Northern Ireland’s department of health said the rollout there will continue, “in line with MHRA guidance”.

The Netherlands became the latest European country to announce a suspension of the AstraZeneca jab rollout over clotting concerns.

Dutch authorities said the decision was the result of additional evidence received from a study on side effects conducted in Norway.

But the European Medicines Agency (EMA) has said the vaccine’s benefits continue to outweigh its risks and that jabs can keep being administered while it carries out a review into any incidents of blood clots – noting last week that there had only been 30 cases reported among almost five million people jabbed in the European Economic Area.

The number of cases of blood clots reported is lower than the hundreds of cases that would be expected among the general population, AstraZeneca’s chief medical officer Ann Taylor said.