Home » Politics » As Trump Recovers, He Retreats to a Conservative Media Safe Space

As Trump Recovers, He Retreats to a Conservative Media Safe Space

When President Trump picked someone to conduct his first on-camera interview since testing positive for the coronavirus, he made the safest of choices: Dr. Marc Siegel, a physician and Fox News personality who has criticized Democratic governors for closing down schools and businesses to fight the pandemic and declared that Dr. Anthony S. Fauci, the nation’s leading infectious disease expert, is “there to serve the president.”

Dr. Siegel did not disappoint. In an interview that aired on Friday’s “Tucker Carlson Tonight,” he asked about the president’s symptoms (“I didn’t have a problem breathing,” Mr. Trump said). And he did not object when the president said the Secret Service agents who escorted him on a photo op limousine ride at the Walter Reed medical center “thought it was very important” that the commander in chief acknowledge his fans.

Then Dr. Siegel offered a friendly suggestion for how Mr. Trump might get creative for his next meeting with his Democratic rival, Joseph R. Biden Jr. “How would you feel about a debate outside on Miami Beach?” the doctor said.

At the most politically and physically vulnerable point of his presidency, Mr. Trump has retreated to his safe space: conservative media programs, where he can rely on warm, ego-boosting chats with supporters like Maria Bartiromo, Sean Hannity, Rush Limbaugh and Mark Levin.

In these cozy surroundings — his primary way of communicating with the public as he shuns interviews with most other journalists — Mr. Trump has only himself to fear: There is virtually no risk that he will encounter a persistent questioner pressing an uncomfortable topic, or that he will appear as defensive or unruly as he did during the first presidential debate.

But his decision to remain within a right-wing echo chamber has threatened to shut off Mr. Trump from a much larger — and electorally important — audience of potential voters and political independents whose votes he will need if he is to win the election in just over three weeks.

The president’s refusal to participate in the now-canceled second presidential debate because organizers shifted it to an all-virtual event amounted to walking away from a TV viewership of close to 70 million viewers, baffling political media experts. And while Mr. Limbaugh and Mr. Hannity command the biggest audiences in their respective fields, their programs have nowhere near the reach of a debate that airs on a dozen broadcast and cable networks simultaneously.

“Trump should want 10 more debates right now,” Alex Conant, a Republican consultant who has overseen communications strategy on Senate and presidential campaigns, said in an interview.

With Mr. Trump trailing in almost every poll of battleground states, Mr. Conant said, the president’s demands that the debate be held on his terms “was very much an emotional response, instead of a strategic one.”

Mr. Conant noted how successful Mr. Trump was in 2016 by effectively flooding broadcast, print and online news media with his attacks on Hillary Clinton, and in his use of that year’s debates to rebound from the disclosure that he had once boasted on “Access Hollywood” that he could grab women’s genitals with impunity.

“That proved to be an effective strategy for him, because he could go on any media outlet in the country and say Hillary Clinton is a crook,” Mr. Conant said. Now, “because he doesn’t have as consistent a message on Joe Biden or a record to defend, he has been unable to do that.”

Mr. Trump’s approach to campaign media mirrors his electoral strategy, focusing primarily on one bloc of voters: his base.

His two-hour session on Friday with Mr. Limbaugh began with the host playing Lee Greenwood’s “God Bless the U.S.A.” — a staple at Trump campaign rallies — and tape of people chanting, “We love you! We love you!” 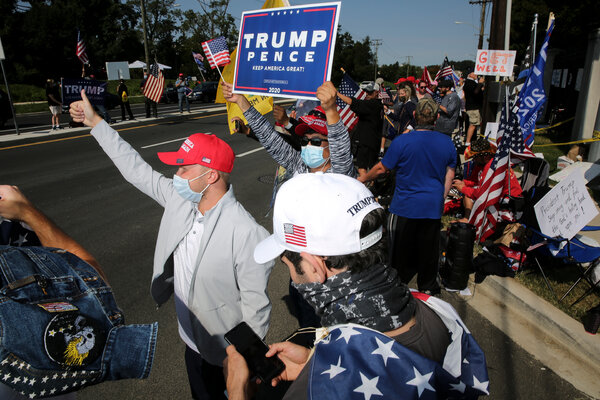 Mr. Limbaugh billed the interview as “the largest virtual rally in radio history.” But the appearance ultimately proved more of a hybrid — part pep talk, as Mr. Limbaugh repeatedly tried to reassure his audience (and his guest) that Mr. Trump was the best man for the White House, and part venting session, as the president recited a host of familiar grievances.

Mr. Trump rattled off a long list of people he said had undermined him, including Mr. Biden, Mrs. Clinton and the former F.B.I. director James Comey. He complained about not being recognized for a Nobel Peace Prize nomination, a slight he pinned on the mainstream media. “They don’t cover any good stuff with me,” he grumbled.

It was a marathon appearance that, at best, might have attracted roughly 10 to 15 million listeners, according to Michael Harrison, the publisher of the talk-radio trade magazine Talkers — big by radio standards, but still a fraction of the television audience that watches presidential debates.

His 8 a.m. appearance on Thursday on Ms. Bartiromo’s Fox Business show — which the White House arranged only the night before — drew about 376,000 viewers, according to Nielsen.

In cherry-picking platforms where he is shielded from uncomfortable questions, Mr. Trump may fall into a political trap of his own making.

The uncertainty over his health — he and his doctors have refused to disclose details about how sick he is with the coronavirus — can seem more glaring when even a Trump confidant like Mr. Hannity cannot glean a straight answer from him. On Thursday, Mr. Hannity twice asked the president if he had in recent days tested negative for the virus; Mr. Trump ignored the question both times. “I know when I’m in good shape or not,” the president said.

And while right-wing hosts often try to steer Mr. Trump toward friendly topics, the president can sometimes miss his cues.

This happened several times during his appearance with Mr. Limbaugh, whom Mr. Trump awarded the Presidential Medal of Freedom this year. The host asked the president to refute claims from Mr. Biden that he would take away health insurance from Americans with pre-existing medical conditions.

Mr. Trump responded by calling his opponents liars and then proceeded to bring up one of the most damaging stories of his presidency: an article in The Atlantic — which he has strongly denied — that quoted unnamed sources saying they heard the president call Americans who were killed in combat “losers.”

Mr. Limbaugh let this digression go on for a while before interrupting. “But there’s still this confusion about pre-existing conditions out there,” he said, urging the president back on track.

In his time in the White House, Mr. Trump has granted more than 100 interviews to Fox News programs, and only a handful to other major networks, according to a tally by Mark Knoller, a CBS correspondent and statistician of the White House press corps.

And while the White House is in discussions with NBC News about a possible televised town hall-style event on Thursday with the president, that appearance may prove to be an exception. In the works is another town hall to be hosted by Eric Bolling of Sinclair News, the right-leaning broadcaster that oversees local news stations in major markets across the country. Mr. Bolling said on Friday that the event is still on for Oct. 19 in Pennsylvania.

“I’ve been in regular contact with the campaign and the White House. Both have assured me it will happen,” Mr. Bolling said.

In his case, Mr. Bolling said the president would expand his audience because Sinclair programs air on mainstream stations across the country — albeit with an interviewer the president knows and is comfortable with. “I think it’s an important show of strength to undecided voters just days from the election,” Mr. Bolling said of the president’s participation.

As Mr. Trump begins to appear in less controlled media environments, he is taking the risk that his illness won’t get the better of him.

The interview with Dr. Siegel on Fox News, his first on camera since he became ill but still not a live broadcast, was intended to show his progression. But there were subtle reminders of the disease that has infected Mr. Trump and many in the White House.

Fox News did not send a camera crew to the White House because of the health risks. Instead, Dr. Siegel asked his questions from a studio in New York while Mr. Trump sat in front of a remote-controlled camera. The appearance was taped during the afternoon and edited before the 8 p.m. broadcast.

Dr. Siegel practices internal medicine at N.Y.U. Langone Health in Manhattan. But the medical institution took a step to distance itself from the doctor’s televised effort to evaluate Mr. Trump from afar.

“In his role as senior medical correspondent for Fox News, Dr. Siegel expresses his own personal opinions,” a Langone spokesman said on Friday. “His comments do not reflect the opinion of N.Y.U. Langone Health.”

President Trump’s campaign has invited hundreds to an event at the White House on Saturday, raising concerns from health experts. Read live updates.

Many rules have changed during the pandemic, making it harder to figure out how to cast your ballot. This interactive guide can help you ensure your vote is counted.

Keep Up With Our Coverage

Get an email recapping the day’s news

China talks up a future in which it needs collaboration with the U.S. and other countries