To some, Rep. Alexandria Ocasio-Cortez D-N.Y., made a bold fashion statement at the swanky Met Gala when she wore a white dress with “Tax the Rich” written in red on the back… while others just got hungry.

Her outfit at the New York City event Monday night went viral on social media for her not-so-subtle message on income inequality. It also drew attention online from users who compared its lettering to Chick-fil-A’s branding.

Some Twitter users compared it to the fast-food chain’s paper bags.

“Who wore it better?” one user wrote on Twitter, along with a side-by-side picture.

Others tweeted that it reminded them of the scratchy lettering from the company’s ads, in which cows scrawl the message, “Eat Mor Chikin.”

Food comparisons aside, Ocasio-Cortez said the lettering was “about having a real conversation about fairness and equity in our system, and I think this conversation is particularly relevant as we debate the budget and reconciliation bill.” 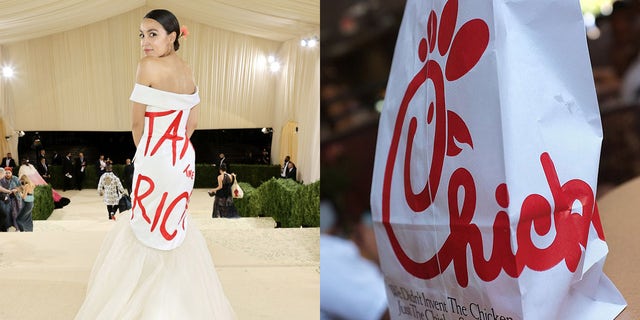 AOC’s dress at the Met Gala and a bag from Chick-fil-A. (Jamie McCarthy/MG21/Getty Images for The Met Museum/Vogue — MANDEL NGAN/AFP/GettyImages)

A self-described Democratic socialist, Ocasio-Cortez is one of the most prominent progressive voices in support of President Biden’s $3.5 trillion budget reconciliation package. She has repeatedly called for increased taxes on the wealthiest Americans to pay for progressive policy initiatives, such as climate-friendly infrastructure and expanded access to free health care.

The Met Gala is regarded as one of the most exclusive social events in the world, which typically attracts celebrities and influencing people from around the world. Tickets to the Met Gala cost at least $30,000, The Associated Press reported, though it was unclear if Ocasio-Cortez purchased a ticket.

During an interview on the red carpet, Ocasio-Cortez noted that she and the dress’s designer, Aurora James, discussed “what it means to be working-class women of color at the Met.”

“And we said, we can’t just play along, but we need to break the fourth wall and challenge some of the institutions, and while the Met is known for its spectacle, we should have a conversation about it,” Ocasio-Cortez said.

Other notable figures to attend the Met Gala included New York City Mayor Bill de Blasio, who made an appearance Monday night despite previously shunning and ridiculing the high-society event.

De Blasio was captured stepping on the red carpet with his wife, Chirlane McCray, and son, Dante, after calling it “not my cup of tea,” back in 2019.

“It’s an elite gathering, I’m not an elite guy. It really — let’s make it real simple, it’s just not my thing,” the mayor said at the time. “This is the kind of place where the elite goes and likes to be with each other, and I have a different approach.”